The Death of One of Washington’s Favorite Tyrants 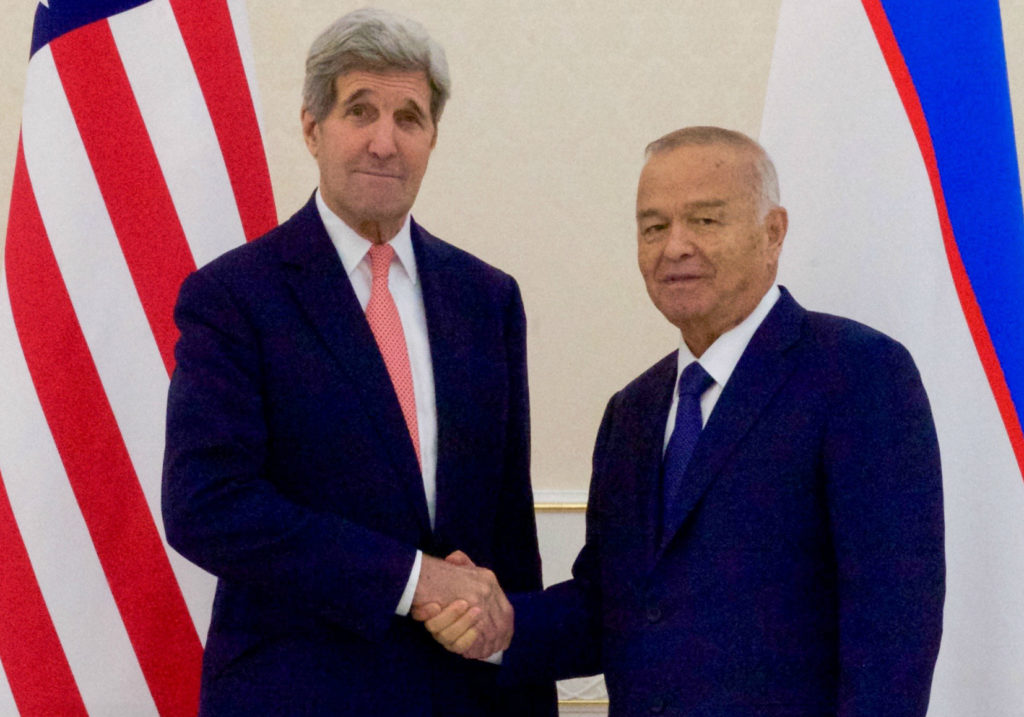 7 Sep 2016 – The death of long-time Uzbekistan dictator Islam Karimov has brought rare U.S. media attention to the Central Asian country of 30 million. Uzbekistan is ranked among the half dozen worst countries in the world for human-rights abuses. What U.S. government officials and our media mostly ignore, however, is that American taxpayers subsidized that regime and its brutal security apparatus for most of Karimov’s thirty-five years in power.

Torture has been endemic in Uzbekistan, where Karimov banned all opposition groups, severely restricted freedom of expression, forced international human-rights workers and NGOs out of the country, suppressed religious freedom, and annually took as many as two million children out of school to engage in forced labor for the cotton harvest. Thousands of dissidents have been jailed and many hundreds have been killed, some of them literally boiled alive.

Karimov became leader of the Uzbek Communist Party in 1989 while the country was still part of the Soviet Union. He backed the unsuccessful coup by Communist Party hardliners against reformist Soviet leader Mikhail Gorbachev in 1991 and personally opposed Uzbek independence. But finding himself president of a sovereign state when the Soviet Union suddenly dissolved, he quickly modified his position, changing his first name to “Islam” and morphing into an Uzbek nationalist.

As president of the newly independent Uzbekistan, Karimov banned leading opposition parties and amassed his power through the suppression of opponents and a series of rigged elections and plebiscites, labeling virtually all opponents as Islamist radicals.

Uzbekistan is the most populous country in Central Asia, and its capital Tashkent sports a modern subway system and an international airport built during the Soviet era. As an independent state under Karimov’s rule, however, Uzbekistan remains one of the poorest of the former Soviet republics. This is despite generous natural resources, including one of the world’s largest sources of natural gas, and sizable, but largely untapped, oil reserves. Karimov pocketed virtually all of the revenue generated by the country’s natural endowments. Corruption is rampant, and his brutal militias routinely engaged in robbery and extortion. Businessmen who refuse to pay bribes were frequently labeled Islamic extremists and then jailed, tortured, and murdered.

U.S. military cooperation with Karimov’s regime began under President Bill Clinton in 1995, but expanded greatly under President George W. Bush, who provided Uzbekistan with close to $1 billion in aid and an agreement to station up to 1,500 U.S. troops in the country. Karimov was invited to the White House in March 2002, where he and President Bush signed a strategic partnership agreement, which included an additional $120 million in U.S. military aid. Secretary of Defense Donald Rumsfeld has praised Karimov for his “wonderful cooperation” with the U.S. military. President Bush’s former treasury secretary  Paul O’Neill spoke admiringly of the dictator’s “very keen intellect and deep passion” for improving the lives of his people.

Uzbekistan became a destination in the “extraordinary rendition” program, where the United States would send suspected Islamist extremists for torture.

Craig Murray, who served as the British ambassador to Uzbekistan between 2002 and 2004, observed how Karimov was “very much George Bush’s man in Central Asia” and that no Bush administration official ever said a negative word about him.

Murray’s exposé of American and British collaboration with Karimov’s despotic regime cost him his career with the foreign service. And it is still a sensitive issue: just this week, the U.S. State Department denied Murray entry into the United States, where he was scheduled to speak before peace, human rights and civil liberties groups.

In May 2005, following an eruption of pro-democracy demonstrations in Andijan and other cities, Uzbek government forces massacred close to 1,000 protesters over a two-day period. The Bush administration successfully blocked a call by NATO for an international investigation, though a report from Human Rights Watch, based on interviews with scores of eyewitnesses, determined that government troops had used ”indiscriminate use of lethal force against unarmed people.” The British newspaper The Independent reported that Uzbek dictator Islam Karimov “almost certainly personally authorized the use of . . . deadly force.”

The international outcry was so intense, however, that the United States was forced to suspend military aid based on human-rights provisions in foreign aid. To the dismay of human rights advocates, however, the Obama administration in 2011 convinced Congress to waive the restrictions and resume military aid.

In reaction to the Obama administration’s efforts, twenty human rights, labor, consumer, and other groups signed a letter to then-Secretary of State Hillary Clinton, saying “We strongly urge you to oppose passage of the law and not to invoke this waiver.” The signers encouraged the administration “to stand behind your strong past statements regarding human rights abuses in Uzbekistan” and not move toward “business as usual” with that regime.

Signatories included the AFL-CIO, Amnesty International USA, and Human Rights Watch, as well as organizations with close ties to the foreign policy establishment like Freedom House and the International Crisis Group. Despite this effort, Congress overwhelmingly approved the waiver and President Obama signed it into law

Despite evidence to the contrary, Clinton, who visited Uzbekistan that October, claimed that the regime was “showing signs of improving its human rights record and expanding political freedoms.” When asked about the 2005 massacres during Clinton’s visit, a senior State Department official responded, “We’ve definitely moved on from that.”

The repression, and U.S. assistance—climbing to as much as $30 million annually—has continued every year since.

Karimov’s death will not likely end systemic, government-sponsored  human-rights abuses any time soon. And, despite a new U.S. President and Congress coming into office early next year, it’s unlikely there will be a lessening of U.S. support for the regime.

Indeed, it has been extremely rare for the United States to suspend its support for autocracies like Uzbekistan unless there is pressure from the American public to do so. Living under a repressive dictatorship, the Uzbeks are extremely limited in what they can do to change their government’s policies. We here in the United States, however, don’t have that excuse.

Stephen Zunes is a professor of politics and international studies at the University of San Francisco, where he coordinates the Middle Eastern Studies program, and co-chairs the academic advisory committee for the International Center on Nonviolent Conflict. He is the author, along with Jacob Mundy, of Western Sahara: War, Nationalism, and Conflict Irresolution (Syracuse University Press, 2010). Zunes is currently serving as a visiting professor at the National Centre for Peace and Conflict Studies at the University of Otago in New Zealand.