The Road from Standing Rock to Gaza Is a Straight Line 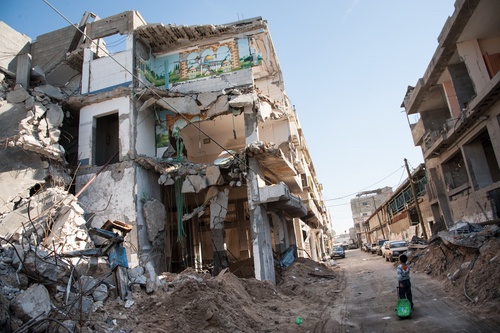 19 Sep 2016 – I’m not a North American Indian although I was adopted by clan mothers of the Longhouse Bear Clan from Akwesasne during the Summer of 1990 armed standoff between the Haudenosaunee (Iroquois Confederacy) and Quebec where I served as legal counsel to the Mohawks. It began “simple” enough over a provincial plan to expand a golf course in Oka (Khanesatake) by taking over a traditional cemetery and destroying a sacred Pine forest in the heart of the Mohawk territory. After months of a standoff, mostly with Native women and children guarding a sacred ceremonial fire against bulldozers, a gun battle erupted between the Quebec Police (Surete du Quebec) and the Warrior Society, largely from Akwesasne… the Mohawk territory that straddles the borders of New York and Canada.

When the smoke cleared, an SQ officer was dead and the Canadian Army called out to surround a hundred or so of us who continued to stand ground. While days turned into weeks and then months of negotiations, “First Nations” across Canada answered the call to support our efforts by blocking highways, seizing municipal buildings and occupying bridges across the country; at least one, the Mercier, connecting the Mohawk Territory at Khanawake with Montreal, was wired with explosives. Soon the resistance spread to Indian communities throughout the US with threats of reprisals if we were attacked. It was a time when Indian communities across the continent stood as one and said in one clear voice “enough; enough to broken treaties, enough to stolen resources, enough to the destruction of our communities”.

This piece does not seek to glorify armed struggle, even by indigenous communities with little left to lose. Nor is it about Oka or the half dozen other major confrontations that have, over the past 50 years, exploded between colonial powers and an outnumbered, but determined, Indian people. Confrontations at Wounded Knee, the BIA Headquarters in D.C., Alcatraz… and now with the Standing Rock Sioux over the so-called Dakota Access Pipeline… are not the problem.  These are merely sign-posts of a fundamental disconnect between Indian Nations that struggle to survive as sovereign people with unique cultures, tradition and beliefs and a largely European people and governments who daily attack their fundamental right to self-determination…rewriting Indian history along the way.

I’ve spent most of my adult life among Indian people. As a young man, while a Vista volunteer, I lived with the Winnebago, Omaha and Santee Sioux Indian nations not far from Wounded Knee at Pine Ridge, South Dakota just months after the FBI siege on the American Indian Movement there ended. I worked with Theo Means, the mother of AIM founder Russell Means, who taught me much about patience, determination and sacrifice… traits that Indian people have necessarily had to master in order to survive in their own homelands. I also spent a lot of time with the Native American Church and was honored to participate in its ceremonies and celebrations.

For a decade I was counsel to the Rotisken’rakéhte, often referred to as the Mohawk Warrior Society; Longhouse men who answer to the clan mothers and, in keeping with a tradition going back millennium, are responsible for national defense and public security in Mohawk Territories.

I’ve handled hundreds maybe thousands of cases over the many years I’ve represented Iroquois and other Indians in state, provincial and federal courts in the United States and as a consultant in Canada. While many were in the nature of classic criminal defense, often were there occasions when our work, both domestically and abroad, was purely political in nature ranging from the right of Indians to travel internationally on a Haudenosaunee passport, to unfettered cross border trade, to the right to begin each school day, in a public school comprised largely by Mohawk students, by reciting the “Thanksgiving Address” … an age old Iroquois blessing. And, on occasion, there were tense, sometimes deadly, standoffs with law enforcement and even within factions in the Confederacy itself when it came to the defense of Iroquois sovereignty and tradition.

I’ve taken much more than I’ve given; learning far more than I’ve taught over the many years of my life and work in Indian communities. I’ve developed a pretty good understanding of what indigenous sovereignty means, indeed, what it demands… and I am not talking about foreign laws or statutes. It’s not about the little things like whether Indians need hunting or fishing licenses in their own territory or are exempt from paying tolls at international border crossings, or getting a “pass” from the collateral consequences of free trade agreements that impact adversely upon their local communities… all with no controlling input from their traditional Tribal Councils and chiefs. While the significance of such issues should not be diminished, the paramount issue is rank tokenism… a perverse game where we call Indians sovereign yet reduce self determination to little more than daily ministerial tasks that, at day’s end, must still comport with the whim of foreign law… the arena where, justly, Indian tradition and priorities should control. And while pow wows and tobacco burning ceremonies have played an important age-old role in the rite of passage within Indian communities, today, to non-Indians, they are seen as little more than entertainment to the delight of tourists who for one brief moment get a glimpse of what was, but do not understand what still is.

The ultimate question is who gets to decide what is to become with, in and on, Indian land and communities. And while the confrontation at Standing Rock has galvanized Indians and non-native supporters from across the continent, it’s but a symptom of a much deeper crises facing several million Indians holding on to endangered traditions and cultures that predate our arrival by several thousand years.

Standing Rock is not “just” about the impact, one way or another, of a so-called development project upon Native land. It’s about the arrogance and greed of power and the trappings of illusion. We call Indian people sovereign; indeed the Constitution refers to Tribes as sovereign nations… but it’s all a grand, perverse lie. We romanticize Indians as so much a part of our glorious history and yet deny them their fundamental right to determine their own present and future. We hold public sessions and ask them for their input on decisions which influence their land, communities and people but then do whatever suits the political and economic whim of the moment. It’s called concurrent jurisdiction.

Indians need nothing from the US government but to honor age old treaties and to be left alone to determine their own priorities and develop their own communities based upon age old traditions and beliefs… whether they comport with our view of their world or not. Every day in Indian communities across this continent, Tribes are free to make decisions about their unique needs, practices and communities until it rubs up against those of the outside world.   At that point concurrent federal jurisdiction kicks in and controls what does or does not happen in what’s supposed to be sovereign land.

Of course, whenever controversy in Indian country attracts public interest and builds drama, courts and politicians are quick to act to curry favor, to earn points, to “balance” equities and to protect the interests of “our” Native people… who always seem to lose on any core issue that would require us to defer to their self determination and decisions.

Long after Standing Rock fades into our collective memory Indian Nations will struggle to survive, to chart their own course against impossible odds, forced to fight every day on big and small issues alike. Not a day goes by where Tribes are not told by outside government agencies what they can and cannot do about their communities and Tribal practices and jurisdiction. Battles like air and water access, development projects and resource rights captivate the outside world. But there are endless and immediate issues that even the politically astute and concerned among us just don’t get about real sovereignty or what it is to be a sovereign people in the midst of a colonial power.

Bernie Sanders spoke the other day at Standing Rock to the roar of thousands. A wonderful orator, he no doubt went on and on about Native rights and corporate greed. He always does.

That night, Sanders likely returned to relax on the deck of his new 600 thousand dollar cabin that sits on the shore of Lake Champlain in Vermont… built on land that sits in the middle of the Eastern Abenaki Nation land claims. Some things just don’t change.