While Pfizer made $6.245 billion in revenue last year, 1.4 million children die each year from the pneumonia strain. 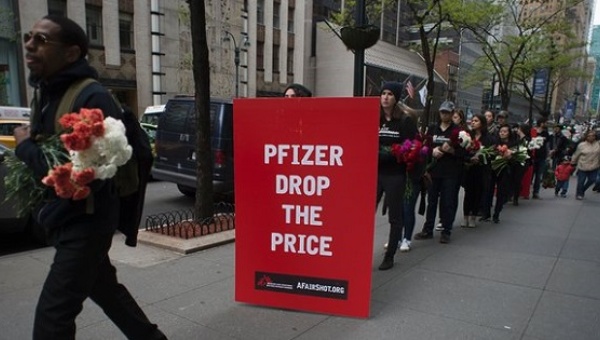 16 Oct 2016 – Doctors Without Borders said last week it had refused a donation of one million pneumonia vaccinations from the drug manufacturer Pfizer as part of a principled stand against Big Pharma‘s monopolistic drug-pricing policies.

While Pfizer raked in US$6.245 billion in revenue last year, 1.4 million children continue to die from the disease every year.

Pfizer’s vaccine for pneumonia is known as PCV-13. Since its introduction in the United States six years ago, cases of severe Strep pneumonia in that country have declined by 88 percent. But pneumonia deaths remain commonplace in sub-Saharan Africa and southeast Asia, where the award-winning Doctors Without Borders — known outside the U.S. as Médecins Sans Frontières (MSF) — ply their trade.

But Pfizer’s vaccine is expensive and protected by multiple patents, on both the final product and also on the process by which the vaccine is made. Last year the South Korean company SK Chemicals was close to producing a similar vaccine but Pfizer sued the company with the support of the intellectual Property Tribunal.

“Pfizer is committed to making vaccines available to as many people as possible,” company spokesperson Sally Beatty told The Atlantic by email, “particularly those needing emergency humanitarian assistance.”

Beatty explained that Pfizer “strongly disagrees” with MSF’s decision, and that “to suggest that donations are not valuable defies logic.”

MSF has been wanting access to PCV-13 since 2009 when it was first introduced, but the group has lacked the resources to purchase it.

Jason Cone, the executive director of Doctors Without Borders in the United States, says the cost is the most fundamental issue. He explained that donations from pharmaceutical companies are only a short-term solution, that would actually be dire in the long term.

“(Donations) are often used as a way to make others ‘pay up.’ By giving the pneumonia vaccine away for free, pharmaceutical corporations can use this as justification for why prices remain high for others, including other humanitarian organizations and developing countries that also can’t afford the vaccine,” he said.

“I’m not absolutely against donations,” MSF’s vaccine pharmacist Alain Alsahani told The Atlantic. “In cases of neglected disease where there is little or no market for a product,” he explained, “donation becomes a more interesting option for some countries to get access. But in the case of PCV, that’s not a solution at all, in any way.”

When The Atlantic probed Pfizer about making the vaccine affordable to humanitarian organizations like MSF, Beatty wrote, “We are actively exploring a number of new options to enable greater access to our pneumococcal vaccine … to aid NGOs facing humanitarian emergency settings.”

Other vaccines are also controlled by monopolies and duopolies. Both the HPV and the rotavirus vaccine against diarrhea are made only by GSK and Merck, while the new malaria vaccine is only made by GSK.