Bullfighting, a bloody ritual intended to ennoble both the “torero” and his victim, has been popular in Spain for generations. 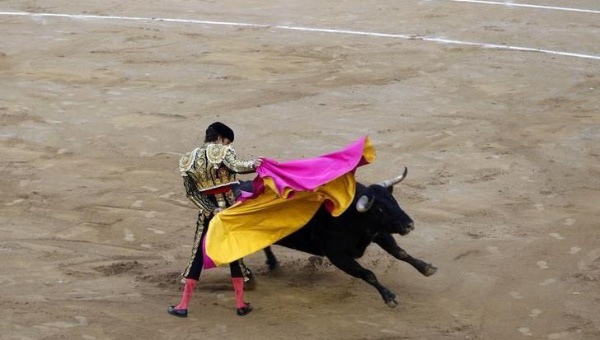 Spanish bullfighter Jose Tomas performs a pass to a bull during the last bullfight at Monumental bullring in central Barcelona Sept. 25, 2011.
Photo: Reuters

21 Oct 2016 – Spain’s Constitutional Court on Thursday [20 Oct] overturned a ban on bullfighting imposed in Catalonia, calling it a cultural asset protected under national law in a ruling likely to fuel political tensions between the region and Madrid.

ANALYSIS: The Battle Against Bullfights in Ecuador: A Decolonial Frontier

Bullfighting, a bloody ritual intended to ennoble both the ‘torero’ and his victim, has been popular in Spain for generations.

But its appeal has waned as animal rights activists and a generation of Spaniards exposed to less traditional values question the legitimacy of an activity they say is barbaric and archaic.

Catalonia, a wealthy region in the country’s north east with its own language and customs and a strong and active independence movement, became the first part of mainland Spain to outlaw the spectacle in 2012.

But the constitutional court ruled Thursday that the ban was invalid as bullfighting was protected under Spanish law and exempt from prohibition at a regional level.

Having already refused to accept a ruling from the same court invalidating Catalonia’s pursuit of independence, authorities in the region indicated they would ignore Thursday’s verdict too.

“There will be no bullfights in Catalonia again,” said Josep Rull, a member of the Catalonian parliament.

A long-running dispute with the central government over Catalonia’s independence drive was sharpened in early October when the region’s parliament voted to hold a referendum on secession next September.

Spanish animal rights political party Pacma denounced Thursday’s bullfighting ruling, posting on Twitter; “We will not rest until it is abolished in all of Spain.”