This is how the Israeli education system makes it possible for generation after generation of Israelis to accept the most brutal forms of state violence. 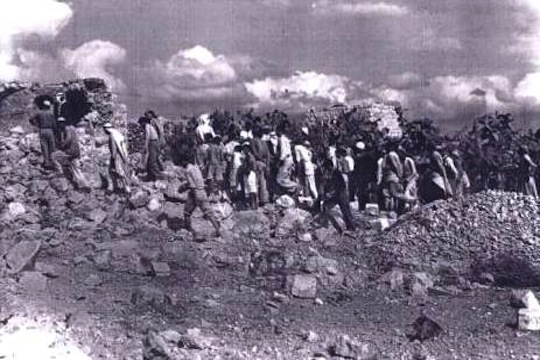 Inhabitants of Qibya coming back in their village after its attack by israeli forces, October 1953. (photo: unknown)

23 Oct 2016 – October provides Israelis a number of opportunities for self examination, one of which happened just a week ago, on October 14. On that night in 1953, 600 Israeli soldiers — half of an infantry battalion — raided the Palestinian village Qibya, located just over a kilometer from Israel’s border with the West Bank, then under Jordanian control. The soldiers opened fire, threw grenades, laid explosives, and blew up 45 homes. Sixty-nine residents of Qibya, the majority of them women and children, were killed in the attack.

Israeli public intellectual, Yeshayahu Leibowitz, wrote an article on the moral failure of the massacre, in which he stated:

We must ask ourselves: where does this teenager come from, the one who has no qualms about committing such an atrocity, when was he pushed from within or without to commit revenge? The teen, after all, is not part of the rabble, but rather someone who grew up and was educated on Zionist principles, alongside human and societal values.

I suggest a response: it happened due to Zionist education, which creates a distorted view of reality, along with existential fears that can erupt in a rage against an imaginary enemy. The following are the building blocks that make up this education as they were expressed in the Qibya massacre. The readers are welcome to compare them to all other Israeli military actions taken that night in October 1953.

The first step is creating a smokescreen of lies and denials. On October 19, 1953, Prime Minister David Ben Gurion gave a radio address to the nation: “The Government of Israel rejects with all vigor the absurd and fantastic allegation that 600 men of the IDF took part in the action against the village of Qibya.”

Media outlets proceeded to tow the government line, as John Brown previously pointed out. The Ma’ariv daily, for example, established that the story of the village, “which was erased from the earth” is nothing more than the descriptions of “Radio Ramallah, with its exaggerative, Oriental imagination.”

During a Knesset hearing on the condemnations against Israel in the United Nations, MK Mordechai Nuruk said: “It is a lie that this was committed by the IDF. Anyone with a brain will not believe that the heads of the state were able to take such a step… the truth is that the residents on the border, who have weapons for self protection, are the ones who did it.” It was Ben Gurion who spread the idea that angry Israeli citizens carried out a revenge mission in response to a Palestinian infiltration attack, which killed three Israelis earlier that day in the city of Yehud.

It was, however, the heads of state who ordered the IDF to “attack, temporarily occupy, and inflict maximal damage against the people in the village Qibya, in order to cause the residents to flee their homes.”

The various lies and different versions cause people like you and I, who are neither well versed in the details nor exposed to first-hand documentation, to lose the ability to judge the events that transpired. We are no longer sure what happened and what didn’t, and thus we lose faith in their judgement.

The second step is intended to blame the victim. The Israeli newspaper Zmanim wrote at the time: “We do not believe that the language of open, brutal force is the only language understood by killers of women…” That is, they were the first to kill — and therefore they deserved it.

A British news report on the Qibya massacre:

In 2005 the Education Ministry published a paper on the “Qibya incident” and the big question the government was forced to contend with in its wake: “What is the right way to attack terrorists who hide behind citizens?” Sixty-nine dead are no longer innocent civilians, but rather people who hid terrorists in their homes. Do not forget the truth: the IDF did not raid Qibya to look for terrorists, but rather to harm a civilian population. And this was not an “incident” — it was a planned massacre.

If the Arabs are to blame, then the Israeli side is the victim. This is how MK Shalom Zisman began his speech to the Knesset: “From childhood I saw the big picture of Jewish reality, whose identifying mark was a lack of security, persecution, massacres, crusades, expulsions, pogroms, public beatings, blood libels, and explosions of public rage.”

Along with using history, it is common to empower victims through hyperbolizing the damage caused to Arabs in Israel. Ma’ariv reminded its readers at the the time that the criticism of Israel ignores the “421 Jews who died in attacks on the border with Jordan.” Other newspapers emphasized that these were citizens who were murdered by infiltrators over the last three years.

Why only 421? The Education Ministry’s digital library’s entry on “reprisal operations” begins as such: “Between 1951-1955, approximately 1,000 Israeli citizens were killed in violent attacks. Israel responded with reprisal operations against the violence of Arab infiltrators.”

Why 1,000? The number of civilians killed by Palestinians who crossed the border during the years 1951-1953 is 77, not 421. The number killed over a period of five years (until 1955) is 117, not 1,000. The exaggeration has a clear role: if 1,000 Israeli citizens were indeed killed, perhaps one could have understood the rage behind the reprisals.

The fourth step remains very popular today, and is intended to change the topic of discussion: why talk about Israel’s crimes when we can talk about the crimes of other nations in other times?

This is what MK Yitzhak Levin said during a Knesset hearing in 1953: “Where was the world when our blood was shed daily, when they exterminated millions of our people in a ruthless manner unmatched in the history of human kind? Instead of putting those who encourage infiltration and murder in the defendant’s chair, they put us in the defendant’s chair.”

An additional step taken to mold our consciousness is the justification of the act. No longer do we hide behind lies, but rather we stand tall, backed by the law. In the case of Qibya, it was Rabbi Shaul Israeli, one of the leaders of the religious Zionist movement, who analyzed the events from the point of Jewish law: “Since according to conventional measures the population encourages, in all sorts of ways, the actions of the gangs, and this surely helps strengthen and expand their actions in the future, then the entire population in this case presents a danger.”

In the rabbi’s estimation, the residents of Qibya had to be killed, since they encouraged attacks on Israel. This ruling stands until this very day. In 2002 a student asked Rabbi Yuval Cherlow whether killing all the residents of a terrorist’s village is allowed. The rabbi responded that “Rabbi Israeli provided a detailed answer on the Qibya operation. He ruled that there is room for reprisal operations.” 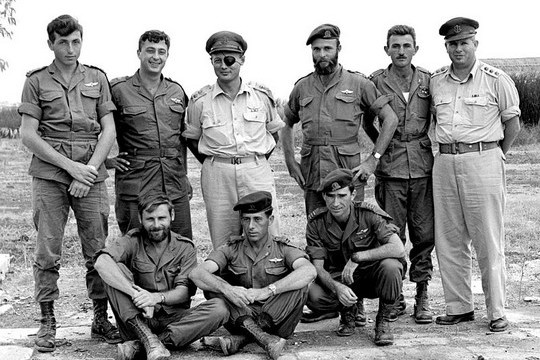 Israeli soldiers belonging to Unit 101, a special forces unit of the IDF responsible for carrying out reprisal operations across Israel’s borders.

And what about those who acted bravely on our behalf? If the Arabs are to blame, it follows that we are the victims, the world is hypocritical, there was religious justification for the act, and those who did it are heroes. The heroes of Qibya belonged to Unit 101, which was active between August and December 1953. Those five months were enough for IDF Chief of Staff Moshe Dayan to write: “101’s activity was excellent. Its accomplishments were an example for the rest of the IDF units.”

And finally, after all the distortions, lies, and distractions, we make sure to completely ignore what transpired. Reprisal operations were intended to strike the Arabs with such force that they would refrain from harming Israel in the future.

This did not prove itself in 1953, nor has it proven itself today. The fact is that the state of war is alive and well, despite all the damage we have caused and all the harm done to us. But in Israel we ignore the fact that it has no purpose. Even after 60 years out defense minister still believes in the strategy of reprisal, according to which “we must quash our enemy’s motivation to to try us a second time.”

Education in Israel functions in such a way that the internal propaganda uses the exact same aforementioned steps: it didn’t happen like that; they are to blame; we are the victims; the world is hypocritical; it was done legally by our heroes; don’t worry about the results. This is how generation after generation of young people grow up with a distorted reality — they do not know the truth, they are confused, and therefore also afraid. They cannot contend with the gap between the story on which they grew up and the one that is told by media outlets outside of Israel. This is how the helpless, hopeless victim mentality is molded.

Gil Gertel is a blogger for Local Call, where this article was first published in Hebrew. Read it here.