Climate Change Is Intergenerational Theft. That’s Why My Son Is Part of This Story

By including Toma in my film at the Great Barrier Reef I want to show how environmental disasters are creating a lonely world for our children. 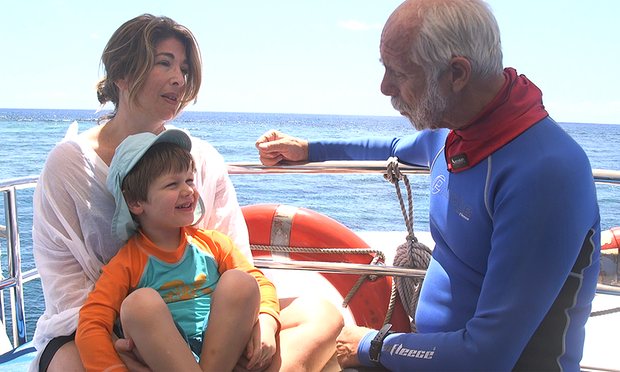 Naomi Klein with her son Toma and John Rumney from the Great Barrier Reef Legacy project. ‘The strongest emotions I have about the climate crisis have to do with Toma and his peers. I have flashes of sheer panic about the extreme weather we have already locked in for them. But even more intense than this fear is the sadness about what they won’t ever know.’ Photograph: Josh Wall for the Guardian

7 Nov 2016 – The short film I’ve made with the Guardian stars my son, Toma, aged four years and five months. That’s a little scary for me to write, since, up until this moment, my husband, Avi, and I have been pretty careful about protecting him from public exposure. No matter how damn cute we think he’s being, absolutely no tweeting is allowed.

So I want to explain how I decided to introduce him to you in this very public way.

For the past eight years, I have been writing and speaking about climate change pretty much around the clock. I use all the communication tools I can — books, articles, feature documentary, photographs, lectures.

Yet I still struggle with a nagging feeling that I’m not doing justice to the enormous stakes of this threat. The safety and habitability of our shared home is intensely emotional terrain, triggering perfectly rational feelings of loss, fear and grief. Yet climate discourse is usually pretty clinical, weighed down with statistics and policy jargon.

All that information is important, of course. But I have started to worry that, by being so calm and clinical, we may be tacitly sending the message that this isn’t really an existential emergency after all. If it were, wouldn’t the people raising the alarm sound more … alarmed? Wouldn’t we share more of our own emotions?

Watch Video: Naomi Klein at the Great Barrier Reef: what have we left for our children?

I was thinking a lot about these questions when the Guardian approached me about making a short film at the Great Barrier Reef while I visited Australia to receive the Sydney peace prize. I initially refused. I had already decided to travel to Queensland and see the bleaching and die-off for myself. But I was planning to go with my family and saw our visit as a very personal experience. Precisely because I knew I would be overwhelmed by seeing this tragedy through my son’s eyes, I didn’t want cameras around.

A few days later, the Guardian asked again. And I started thinking: maybe this was a chance to get at aspects of climate disruption that scientific reports and political arguments just can’t convey. Perhaps it could communicate, in a visceral way, the intergenerational theft at the heart of this crisis.

There is no question that the strongest emotions I have about the climate crisis have to do with Toma and his peers. I have flashes of sheer panic about the extreme weather we have already locked in for them. But even more intense than this fear is the sadness about what they won’t ever know. These kids are growing up in a mass extinction, robbed of the cacophonous company of being surrounded by so many fast-disappearing life forms.

According to a new WWF report, since I was born in 1970 the number of wild animals on the planet has dropped by more than half – and by 2020 it is expected to drop by two-thirds. What a lonely world we are creating for these kids. And what more powerful place to illustrate that absence than the Great Barrier Reef, on the knife-edge of survival?

So this film shows the reef through Toma’s eyes. He’s too young to understand concepts like coral bleaching and dying – it’s tough enough for him to understand that coral was ever alive in the first place.

It also shows the Great Barrier Reef through the eyes of his mother: moved by the beauty that remains, heartbroken and infuriated by what has been lost. Because what has happened to this wondrous part of the world is not just a tragedy, it’s a crime. And the crime is still very much in progress, with our respective governments busily clearing the way for new coalmines and new oil pipelines.

In a way, that’s the good news: we still have both the time and power to force our politicians to change course. It’s too late for most of the world’s coral reefs but it’s not too late for all of them. And it’s not too late to keep temperatures below levels that would save millions of lives and livelihoods.

For that kind of rapid change to happen, however, we are all going to have to stop being so impeccably calm and reasonable. We’re going to have to find that part of ourselves that feels this threat in our hearts, as well as our heads.

So meet Toma, who just discovered that there is a magical world beneath the waves.