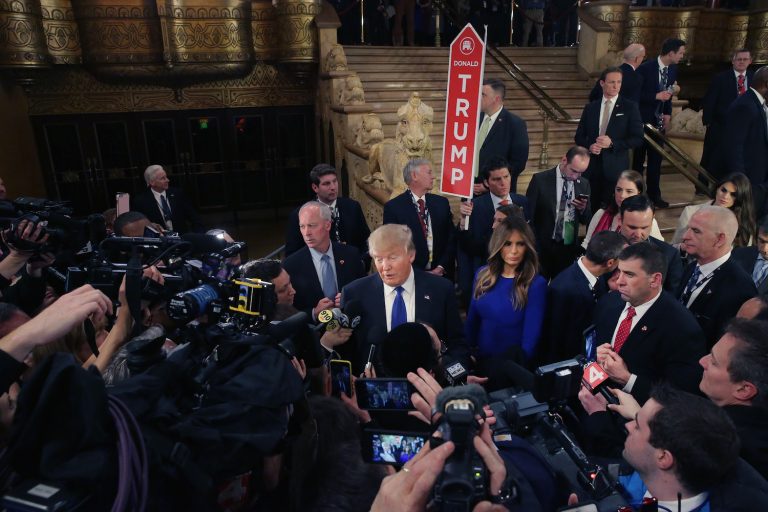 Photo of Donald Trump greeting reporters in the spin room following a debate sponsored by Fox News at the Fox Theatre on March 3, 2016 in Detroit, Michigan, by Chip Somodevilla/Getty Images

9 Nov 2016 – Over the coming weeks there will be much navel gazing. How did we get it so wrong? There were so many uncertainties in the lead up to the 2016 US election result, but one thing is clear: journalism, just like the pollsters, failed.

Stuck in their offices in Washington and New York, American reporters failed to understand what drove Donald Trump’s popularity. They largely failed to ask the right questions, to provide the context and to properly scrutinise the extraordinary campaign run by the new president-elect.

Instead, buoyed by his clickable soundbites, the media gave Trump’s shocking misogynistic and racist imperialism a platform, then failed to take his growing support seriously. As Margaret Sullivan, media correspondent for the Washington Post wrote this morning: “Make no mistake. This is an epic fail.”

But the problem, worryingly, goes far deeper than newsrooms’ failure to fulfil their democratic duty to properly monitor Trump. That failure could at least, with a lot of self-examination, be fixed for next time around. The real issue is much harder to fix.

At the heart of divided societies in both the US and Britain is a newspaper industry in precipitous decline. The true “epic fail” is of the journalism industry as a whole: that the sector has been unable to find an alternative commercial model to the one that has sustained it for so long. As print readers migrate online, few newspapers have been able to persuade them to continue contributing to the cost of producing news; and neither have they been able to convince advertisers that their online versions are as worthy of investment as their print products.

Trump and Brexit as Entertainment

One of the most egregious failings of the media in the US election was their chase of audience share at the expense of substantial reporting. Struggling with ever-declining advertising revenues, newspapers chased the stories that brought them the clicks.

As happened in the UK in the run up to Brexit, lots of American media outlets treated Trump as entertainment – his soundbites, as shocking as they were, provided fantastic content on social media. For months, many newspapers allowed Trump to get away with making blatantly untrue statements – and elevated those untruths to their front pages.

Also worth mentioning here is that the failure to find a new commercial model has led to a shocking reduction in journalists. As reported by media commentator Roy Greenslade earlier this year, the number of people employed in the US newspaper industry has fallen by almost 60% since the dawn of the internet age – from nearly 458,000 in 1990 to about 183,000 in 2016. It is a similar picture in the UK.

This loss has been felt most seriously among regional papers which have either cut their newsrooms right back to the bone or shut up shop altogether. With the firing of so many regional reporters, a crucial understanding of both countries has disappeared.

Yes, the big media platforms flew thousands of journalists all over the US to interview supporters pitching up to rallies, but these reporters rarely got out of the campaign bubbles. They had not lived among the many communities that voted for Trump.

Locked up in their ivory towers, these journalists failed to believe that Trump would make it all the way to the White House because they did not know and understand the people that got him there. They reported on the phenomenon of the presidential race, Trump’s outlandish statements and Hillary’s failings, but they largely did not report on the frustrations that built such fervent support for the real-life Biff Tannen.

As for Trump, he holds journalists in contempt; regularly sneering at them throughout his campaign and pointedly describing them as “horrible people.” He decided from the outset to find an alternative way to his supporters – with great success, thanks to the very platforms that have been cutting into the revenues of newspapers. On Twitter, Trump has over 13 million followers; the New York Times’ total circulation is about 2 million.

As we reflect on what went so horribly wrong, for the sake of democracy it is crucial that we also ask whether we can make journalism great again. We have to hope the newspaper industry finds a new way to sustain its existence. But we must also look to new models – of which not-for-profit news organisations like the Bureau of Investigative Journalism are one.

Philanthropically-funded journalism is not a silver bullet. It cannot plug all the gaps left by the storm that has battered traditional media for the past decade. But it is a force for good and it has to become a valued part of the news landscape.

The Bureau, with a small team of journalists but with the privilege of time to properly report our stories, has continually held power to account through our near seven years of existence. We have investigated the influence of money in politics, we have forced Washington to become more transparent about its covert drone war, we have reported on immigration in Europe, we have revealed many failings of our own government, we have shown how powerful PR companies have manipulated the news, and we have documented social failings in housing, in care and in police investigations.

We have also striven to plug some of the blatant gaps in our industry. In 2017 we will launch a project that will deliver data journalism to our struggling local press. And with the National Council for the Training of Journalists we are also encouraging a more diverse industry by launching a Diversity Fellowship.

Every member of the Bureau understands the important part investigative journalism must play in the years to come. Now more than ever, we need strong, independent, fearless and deep reporting that holds power to account. We need journalists who have the time and the resources to properly investigate the stories that matter. On a day when many people around the world are feeling fearful of what lies ahead, we pledge to at least do that.

The Bureau of Investigative Journalism is an independent not-for-profit organisation. Established in April 2010, the Bureau is the first of its kind in the UK, where philanthropically funded journalism is rare. Our team of journalists bolsters original news by producing high-quality investigations for press and broadcast media with the aim of educating the public and the media on both the realities of today’s world and the value of honest reporting.