Feeling like a hero or victim can lead to feelings of entitlement and drive social processes in post-conflict societies. How this has affected Namibia. 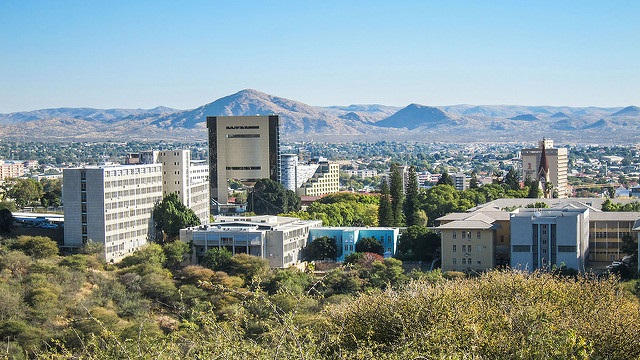 Status matters in peacebuilding and justice.

Status is important. Our research shows that in low-income countries, claims based on ‘victim’ or ‘hero’ status provide resources that lead to economies of entitlement. This matters in peacebuilding and justice, because in post-conflict situations victims and heroes struggle for exclusive entitlements based on their feeling of deserving something, as just and fair redress for past suffering or as reward for glorious deeds. We find that the exclusive character of such entitlement claims in the long run potentially leads to injustices which can undermine peacebuilding.

In 1992, the then UN Secretary General Boutros Boutros-Ghali announced the agenda for peace. Justice became an important element that could strengthen and solidify social peace and cohesion. So to overcome feelings of revenge, issues of justice and reconciliation are today part of the peacebuilding framework.

Most post-conflict justice approaches focus exclusively on victims and their needs and rights or, respectively, on sanctioning perpetrators. However, justice is a multi-faced phenomenon and political violence does not only produce ‘victims’ but also other categories such as ‘heroes,’ which also call for just and fair treatment. Most likely, their perception of justice will differ from the perceptions of other groups.

For peacebuilding purposes, however, it is necessary to look beyond individual perceptions and claims. Social justice means ensuring that chances in society are appropriately distributed, and that everyone has equal access to rights and opportunities, an important consideration to help support sustainable peace. 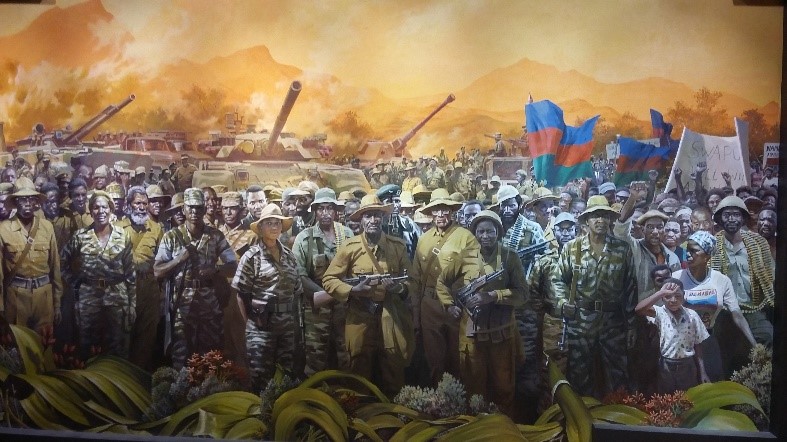 A display at the Namibian Independence Memorial Museum picturing the struggle for independence from the official perspective. Image credit: Markus Bayer.

The roots of entitlement

Everybody knows the feeling of injustice if we do not get what we felt entitled to.

Importantly, feelings of entitlement have been identified by social psychologists as one essential ingredient for social justice. Everybody knows the pressing feeling of deserving something, and the feeling of anger or injustice if we do not get what we felt entitled to. This feeling originates from the unconscious principle we learn from early childhood on that “good things happen to good people.” The feeling of deservingness also applies in a reverse sense, meaning the deep-rooted belief that suffering in life must be compensated one day.

Generally, people tend to understand their fate as zero-sum, so that the feeling of entitlement as reward or compensation can be transferred from the ‘original’ scene to completely different areas. Psychologists, for example, have found that shortly before important exams students are eager to help others because they think this would pay off in later deserving and receiving a good mark. Such effects have been observed for individuals but also for collectives. Social psychologist Vamik Volkan, for example, has shown that nation-states tend to develop ‘selfish’ or expansive behaviour after victimising experiences, driven by the feeling to balance their unpleasant fate.

The economy of entitlement in Namibia

The government in Namibia still defends its claim to power with reference to past merit.

In Namibia, the victorious independence fighters of the South West African Peoples Organization (SWAPO) took power after a protracted war of liberation against South African occupation from 1966-1989. Since then, the political landscape has been dominated by the Swapo, the successor party of the former SWAPO movement, which legitimates its rule and special status by its heroic role during the war. The question “where have you been while we fought in the trenches” became the maxim for the feeling of entitlement of Swapo. This excluded other actors and finally led to a government unresponsive to criticism which lapsed into corruption. Government positions are consequently occupied by former leaders of the liberation struggle, and political opposition parties are either discredited as being “boers” (the white) or traitors (if they are former Swapo members).

Namibia represents an example of heroes’ entitlement where the brave fighters for independence felt entitled to rule the country. From their perspective, they earned and deserved key positions in government because of their past deeds. The context of this heroic political culture and the difficult social conditions in Namibia put in motion an economy of heroes’ entitlement.

Not only does the current government still defend its claim to power with reference to past merit, in order to get access to resources and acknowledgment, different social groups have begun to claim hero-status. Claims to any form of entitlement have centred on past merit. This has widened the circle of entitlement feelings.

First were the veterans of the liberation war, who were given posts in enlarged security forces after they protested against their living conditions. Second were the so-called struggle kids – children of former SWAPO activists who were born in exile – who recently rallied under the banner of the “Children of the Liberation Struggle” to lobby for privileged access to government jobs. They legitimate their claim by their kinship and were labelled as a “category of people deserving a special treatment” by the former Prime Minister Nahas Angula. 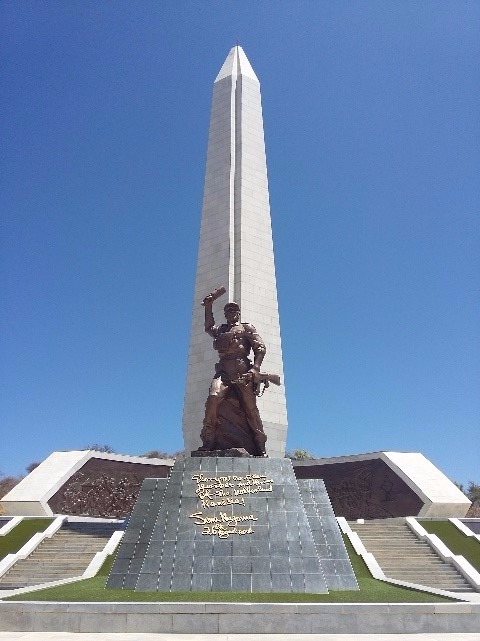 The ‘Heroes’ Acre’ stateu in Windhoek, a memorial site for the Heroes of the Liberation struggle. The bronze statue intended to represent the Unknown Soldier resembles the Namibian ‘Founding Father’ Sam Nujoma.
Image credit: Markus Bayer.

Other groups, however, like the so called detainees that were suspected by SWAPO of treason and arrested and tortured or former SWATF fighters find no place in Namibia’s post-independence society. They remain not only unacknowledged but also excluded from the core of Namibia’s citizenship: the liberators.

As the Namibian case shows us, for individuals it might seem necessary and acceptable to deviate from the principle of equality formulated by John Rawls, and to expect superior performance and heroism. But if countries like Namibia develop an economy of entitlement, leading to exclusive rights and undemocratic and clientelistic allocation of positions, social justice and peace will be threatened.

Markus Bayer Markus Bayer is a research fellow at the Universiy of Duisberg Essen‘s Chair of International Relations and Development Policy.

This article is published under a Creative Commons BY-NC-SA License. You are free to republish this article on your website, subject to some conditions. More information on republishing this article.