My Life with Tourette’s Syndrome 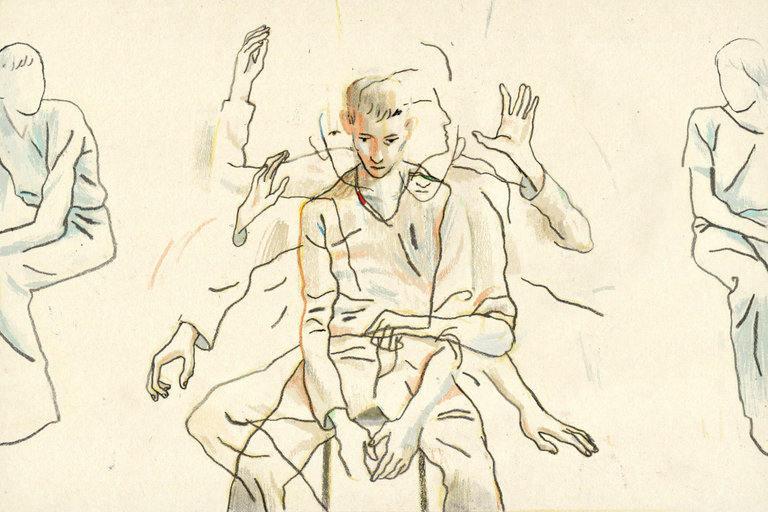 23 Nov 2016 – When I was 17, my father took me to a juvenile treatment clinic to see if doctors could figure out what was wrong with me. I entered a room. I sat on a chair. I waited for a long while. There was a video camera trained on me. Then I heard voices, the voices of doctors behind a two-way mirror. It was like being in a police interrogation room in the movies.

A voice boomed: “So Shane, why do you think you’re acting this way? Do you know what you’re doing?”

I didn’t know what to say. What were the right answers?

I was born with a neurological disorder that causes involuntary movements, vocalizations and tics — sometimes mild, sometimes wildly disruptive: Tourette’s syndrome. Since my youth, I’ve often been stopped in public by the police and questioned because of my symptoms.

Questioned: That sums it up in a single word. My whole life has been questioned.

If people know of Tourette’s, they will often say: “Oh, that’s that swearing disease!” A woman once said to me: ”At least you don’t swear! You would’ve been worse off!”

Compulsive swearing is called coprolalia. Each person with Tourette’s is different, and only some swear compulsively. I don’t; but for most of my life I have had to put up with people swearing and cursing at me because of my symptoms. A few years ago a man argued: “There’s no way you have Tourette’s! If you don’t swear you don’t have it! Period. And I know you don’t have it because I’ve seen it on TV!”

The average person doesn’t know where in the body his kidneys are located. They couldn’t tell you exactly how a baby is born. But they can decide if you do or do not have Tourette’s syndrome.

I am not aware of any other medical condition that provokes such wrath. The minimum social standard is one that I often don’t meet. “You think you can say and do anything you want to just because you got Tourette’s!” they accuse. Or: “He’s always got this Tourette’s thing, that’s what makes him act that way.”

“He just can’t help it” is another form of counterfeit sympathy.

Do these same people truly think that I want to face being ridiculed, embarrassed and being shunned and ignored, not being believed, having little or no credibility, being barred, threatened, ostracized, rejected, isolated, rebuked and laughed at, even assaulted — even as they acknowledge that I have Tourette’s?

I’ve been interrogated by just about everybody; by doctors, by the police and by the public. I have been examined, poked, prodded till I farted. Would you call me paranoid if I said that there are people who think I’m an alien from another planet?

Unlike most other medical conditions or disabilities, Tourette’s is suspect, is subject to scrutiny. Motives are frequently attached. People ascribe or attribute my symptoms to a person who’s out of control or to criminality.

It must be said that I can hurt myself, too. Sometimes, at day’s end, my body is worn out from the punishing tics. At other extreme times I have injured myself slamming into walls and doors.

Sleep is merciful on my body, but I often wake up in the middle of the night. The twitches and tics can change minute to minute, hour to hour and day to day. Tourette’s obeys its own schedule, obeys its own course and obeys its own relentless drive.

People’s reactions toward me can be just as unpredictable; some think that alternative reasons for my tics and twitches must exist. I had an acquaintance who was a religious nut. He once said, “I believe you’re possessed.”

I said, “Yeah, well, I believe I’m dispossessed.” I had no friends and no money.

“I want to exorcise you. I have some holy water,” he said.

I knew exactly what he meant and I knew what he wanted to do. He pulled out a white plastic Kentucky Fried Chicken figurine piggy bank of Colonel Sanders. It was filled with holy water — blessed Toronto tap water. Suddenly he threw the water across my body. He hosed me over in a sign of the cross pattern.

The water was icy cold. I was soaked. My shriek of protest was evidence enough for him of my demonic possession.

I twitched and jerked. “If only,” I said.

Years ago I began to question whether prescription drugs I took to suppress my symptoms were for my benefit alone. I realized the drugs were in large part meant to benefit the public and to suppress their negative reaction toward my symptoms. It was a chemical exorcism.

First I tried an antipsychotic (often prescribed then for Tourette’s, even though it’s not a psychotic disorder). It left me drooling and nearly comatose; I had to sleep 16 to 18 hours a day. Then I tried another drug, which dropped my blood pressure to dangerously low levels. I made the choice then to sacrifice social acceptability for the freedom to be myself.

There is no single drug designed specifically for Tourette’s. Actually, I am sometimes accused of using drugs of a different type, of being a drug addict. When someone says, “Are you on drugs?” that is not a real question. It is not sympathetic. It is an accusation.

Drug dealers often approach me. They see my behaviors, and are sure that I’m on some kind of street drugs. “What do you need? Want some crack? Meth? You sure? What are you on? What?”

I’ve never used drugs to hide from myself, nor to hide from people. I will not use drugs to win acceptance and approval. However, I admire and laud the dedicated research efforts on our behalf, even though designing a drug for Tourette’s would not make much profit. I wish they could design a drug that could be given to other people so they don’t see Tourette’s.

With all the sacrifices and all the losses, there are also upsides to my Tourette’s. I vibrate with almost inexhaustible energy and life and vitality. I have unusually excellent eyesight, and few things escape my attention. I have a heightened sense of hearing and smell. I have the heart of an athlete. My symptoms go up and down and everywhere, but my intelligence maintains itself. Sure I have Tourette’s, but I think I may have swindled God in the exchange.

Day to day, if I do have a complaint it’s that I have muscle fatigue, pain and exhaustion sometimes from my tics. Also: I have a heightened libido, but I don’t have a woman.

A recent news report stated that Charles Manson, age 73, married a 23-year-old woman. The wedding ceremony took place inside the prison. I naïvely, vainly thought this was cause for celebration. If an elderly mass murderer serving a life sentence can get married, then maybe I’ll meet a woman and get married, too. I doubt it. Most women stand me up and turn me down.

As I get older, the hardest challenge remains life itself. Thousands of people have tested social boundaries on me, yet if I complain or resist I can be accused of anything from being the aggressor to playing the victim. I am expected to apologize.

Sorry, sorry and sorry. I will not have a life of having to apologize.

People rarely apologize to me. And I am not allowed to be shocked when people mimic me freely with what they think is complete anonymity and immunity. They want to encourage people to ridicule me without having it heaped onto them. They attempt to usurp my Tourette’s as though they can wear it like a monkey suit.

A few years ago, I was the subject of a documentary. It premiered at a film festival. After the screening, I walked out into the lobby. A young man approached me. He said, ”I know you’re faking it because I am an actor.” And then he acted like someone acting like they have Tourette’s.

What was I supposed to do? Laugh? Clap?

Often mimicry like this is trapped in my memory in an endless loop, and in this way my Tourette’s becomes their Tourette’s.

I said, “Actually, the only time I am faking is when I pretend I don’t have Tourette’s.”

Shane Fistell is an artist living in Toronto.

One Response to “My Life with Tourette’s Syndrome”