Myanmar’s War on the Rohingya 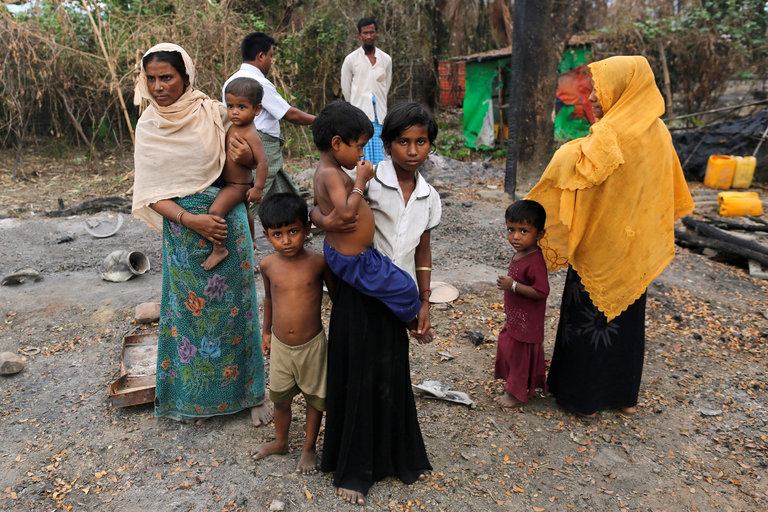 A family outside a market destroyed by fire, in a Rohingya village in Myanmar, in October.
Credit Soe Zeya Tun/Reuters

21 Nov 2016 – Myanmar has long persecuted the country’s Rohingya Muslim minority, denying it basic rights to citizenship, to marry, to worship and to an education. After violence unleashed in 2012 by Buddhist extremists drove tens of thousands of Rohingya out of their homes, many risked their lives to escape in smugglers’ boats; more than 100,000 others are living in squalid internment camps. Now, a counterinsurgency operation by Myanmar’s military is again forcing thousands of Rohingya to abandon their villages.

Over the weekend and on Monday, according to Reuters, hundreds of Rohingya Muslims crossed from Myanmar into Bangladesh seeking shelter from the escalating violence. An official from the International Organization for Migration, a United Nations agency, told the news agency that he had seen more than 500 people enter its camps in the hills near the border. Meanwhile, Reuters also reported fighting between security forces and rebels on Myanmar’s border with China.

The military’s counterinsurgency operation began as a response to an attack on Oct. 9 by armed assailants that left nine police officers dead in Rakhine State. It is not clear who the assailants were, and theories range from drug gangs to Islamist terrorists. Since then, more than 100 people, mostly civilians, have been killed by the military. Satellite images published by Human Rights Watch indicate that at least 430 homes were burned in villages in northern Rakhine State between Oct. 22 and Nov. 10.

There are credible allegations of soldiers looting, killing unarmed people and raping women. The government denies this. U Aung Win, the chairman of a Rakhine State investigation into the Oct. 9 attack, said soldiers would not rape Rohingya women because they “are very dirty.”

The Oct. 9 attack may have been set off by an earlier government announcement that it planned to destroy illegal structures in the area, including more than 2,500 homes, 600 shops, a dozen mosques and more than 30 schools. “That was saying we have to reduce the population of Rohingya,” said U Kyaw Min, a Rohingya who is the chairman of the Democracy and Human Rights Party.

One year ago, after a historic election, Daw Aung San Suu Kyi, the longtime democracy champion and winner of the Nobel Peace Prize, became head of a new democratic government, inspiring hope that she would bring an end to the Rohingya’s suffering. In September, the Obama administration eased remaining economic sanctions on Myanmar, citing, among other achievements, the new government’s focus on bringing “respect for human rights to its people.”

That call now appears to have been premature. Ms. Aung San Suu Kyi herself insists on underlining the Rohingya’s foreignness by referring to them as “Bengalis” and argues that the government’s response to the attack is based on “the rule of law.”

Meanwhile, most humanitarian assistance has been cut off to the area. Unicef has warned that thousands of malnourished children are in danger of starving and lack medical care. The government must immediately allow aid to reach those in need. The United Nations and the United States are calling for an impartial investigation into the violence, and Human Rights Watch is urging the government to invite the United Nations to assist. If Ms. Aung San Suu Kyi wants to defend her reputation as a human rights champion, she needs to extend that invitation now.

A version of this editorial appears in print on November 22, 2016, on page A30 of the New York edition with the headline: Myanmar’s War on the Rohingya.