The president, however, refused to condemn police violence used against land and water protectors. 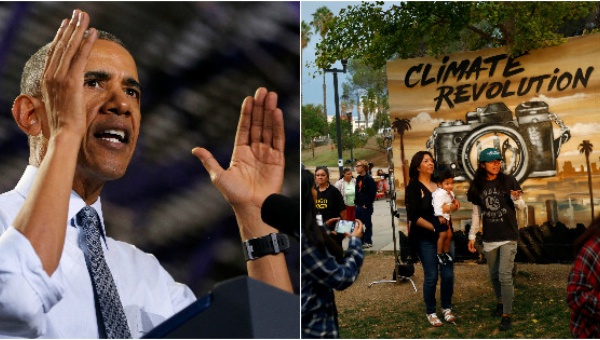 Obama has said the pipeline should be rerouted; climate activists don’t want it built at all. | Photo: Reuters-teleSUR

2 Nov 2016 – Nearly 8 months after a cadre of Indigenous tribes and their supporters began protesting the construction of the Dakota Access Pipeline, U.S. President Barack Obama has finally issued comment on its construction, suggesting that it be rerouted around sacred Native American lands.

RELATED: Over 1 Million People Remotely ‘Check in’ at Standing Rock

When asked about the massive mobilization against the pipeline, ongoing for months, Obama told Now This: “We’re monitoring this closely and I think as a general rule, my view is that there is a way for us to accommodate sacred lands of Native Americans, and I think that right now the army corps is examining whether there are ways to reroute this pipeline.”

In turn, when asked about the highly militarized policing of protests, in particular, the footage depicting police firing rubber bullets at protesters, he said, “It’s a challenging situation. I think that my general rule when I talk to governors and state and local officials whenever they’re dealing with protests, including for example during the Black Lives Matters protests, is there’s an obligation for protesters to be peaceful and there’s an obligation for authorities to show restraint.”

His comments come in the wake of a United Nations-affiliated investigation into allegations of human rights abuses against jailed Native Americans. Many say they were held in cages and faced “cruel and inhumane treatment” behind bars.

“There are no safe options for rerouting the Dakota Access pipeline, because pipelines aren’t safe,” she said. “There is only one option that is truly attentive to the Native lives and lands at stake: respect the rights and sovereignty of Indigenous communities by revoking the permits immediately.”

While Obama has remained silent up until now, activists have also excoriated U.S. Democratic presidential candidate Hillary Clinton, who has to date only issued a short statement saying she believes “all voices should be heard and all views considered in federal infrastructure projects.” With her history of leveling disparaging remarks about anti-fracking activists, the statement is unsurprising.

U.S. Republican presidential candidate Donald Trump, on the other hand, has close financial ties to the pipeline operator.

Protesters are also not surprised by Obama’s comments, but want to stir him to more action.

“Why has he not made a more forceful statement in favor of us? He’s basically trying to cover all his bases without actually doing anything,” said Xhopakelxhit, a Native American activist who has been at the Standing Rock camps for more than a month. “It’s not surprising but it’s a coward’s way out.”

As protests continue with emboldened resolve, despite over 100 arrests made this past week, the escalating costs of running the resistance camps prompted one protester, Ho Waste Wakiya Wicasa, to set up a GoFundMe account to crowdsource funds.

“It still feels unreal sometimes because it is such an astronomical figure to me,” said Wicasa. “The money goes as quickly as it comes, but without it having been as much as it is, we certainly wouldn’t have been able to be as productive as we have been in the fight.”

Concurrently, on Tuesday, North Dakota state officials agreed to borrow another US$4 million in order to cover the rising costs of policing the protests, which has taken an increasingly militarized and violent approach. They also slammed the federal government for not contributing any funding.