The Fatal Expense of American Imperialism

30 Oct 2016 – The single most important issue in allocating national resources is war versus peace, or as macroeconomists put it, “guns versus butter.” The United States is getting this choice profoundly wrong, squandering vast sums and undermining national security. In economic and geopolitical terms, America suffers from what Yale historian Paul Kennedy calls “imperial overreach.” If our next president remains trapped in expensive Middle East wars, the budgetary costs alone could derail any hopes for solving our vast domestic problems.

It may seem tendentious to call America an empire, but the term fits certain realities of US power and how it’s used. An empire is a group of territories under a single power. Nineteenth-century Britain was obviously an empire when it ruled India, Egypt, and dozens of other colonies in Africa, Asia, and the Caribbean. The United States directly rules only a handful of conquered islands (Hawaii, Puerto Rico, Guam, Samoa, the Northern Mariana Islands), but it stations troops and has used force to influence who governs in dozens of other sovereign countries. That grip on power beyond America’s own shores is now weakening.

The scale of US military operations is remarkable. The US Department of Defense has (as of a 2010 inventory) 4,999 military facilities, of which 4,249 are in the United States; 88 are in overseas US territories; and 662 are in 36 foreign countries and foreign territories, in all regions of the world. Not counted in this list are the secret facilities of the US intelligence agencies. The cost of running these military operations and the wars they support is extraordinary, around $900 billion per year, or 5 percent of US national income, when one adds the budgets of the Pentagon, the intelligence agencies, homeland security, nuclear weapons programs in the Department of Energy, and veterans benefits. The $900 billion in annual spending is roughly one-quarter of all federal government outlays. 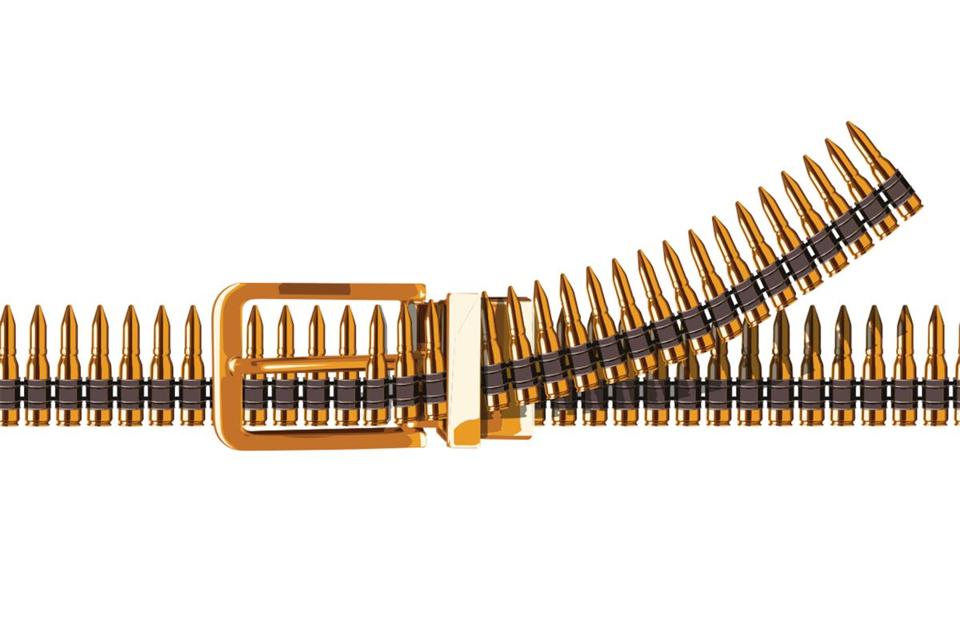 Daniel Hertzberg for The Boston Globe

The United States has a long history of using covert and overt means to overthrow governments deemed to be unfriendly to US interests, following the classic imperial strategy of rule through locally imposed friendly regimes. In a powerful study of Latin America between 1898 and 1994, for example, historian John Coatsworth counts 41 cases of “successful” US-led regime change, for an average rate of one government overthrow by the United States every 28 months for a century. And note: Coatsworth’s count does not include the failed attempts, such as the Bay of Pigs invasion of Cuba.

This tradition of US-led regime change has been part and parcel of US foreign policy in other parts of the world, including Europe, Africa, the Middle East, and Southeast Asia. Wars of regime change are costly to the United States, and often devastating to the countries involved. Two major studies have measured the costs of the Iraq and Afghanistan wars. One, by my Columbia colleague Joseph Stiglitz and Harvard scholar Linda Bilmes, arrived at the cost of $3 trillion as of 2008. A more recent study, by the Cost of War Project at Brown University, puts the price tag at $4.7 trillion through 2016. Over a 15-year period, the $4.7 trillion amounts to roughly $300 billion per year, and is more than the combined total outlays from 2001 to 2016 for the federal departments of education, energy, labor, interior, and transportation, and the National Science Foundation, National Institutes of Health, and the Environmental Protection Agency.

It is nearly a truism that US wars of regime change have rarely served America’s security needs. Even when the wars succeed in overthrowing a government, as in the case of the Taliban in Afghanistan, Saddam Hussein in Iraq, and Moammar Khadafy in Libya, the result is rarely a stable government, and is more often a civil war. A “successful” regime change often lights a long fuse leading to a future explosion, such as the 1953 overthrow of Iran’s democratically elected government and installation of the autocratic Shah of Iran, which was followed by the Iranian Revolution of 1979. In many other cases, such as the US attempts (with Saudi Arabia and Turkey) to overthrow Syria’s Bashar al-Assad, the result is a bloodbath and military standoff rather than an overthrow of the government.

WHAT IS THE DEEP motivation for these profligate wars and for the far-flung military bases that support them?

From 1950 to 1990, the superficial answer would have been the Cold War. Yet America’s imperial behavior overseas predates the Cold War by half a century (back to the Spanish-American War, in 1898) and has outlasted it by another quarter century. America’s overseas imperial adventures began after the Civil War and the final conquests of the Native American nations. At that point, US political and business leaders sought to join the European empires — especially Britain, France, Russia, and the newly emergent Germany — in overseas conquests. In short order, America grabbed the Philippines, Puerto Rico, Cuba, Panama, and Hawaii, and joined the European imperial powers in knocking on the doors of China.

As of the 1890s, the United States was by far the world’s largest economy, but until World War II, it took a back seat to the British Empire in global naval power, imperial reach, and geopolitical dominance. The British were the unrivaled masters of regime change — for example, in carving up the corpse of the Ottoman Empire after World War I. Yet the exhaustion from two world wars and the Great Depression ended the British and French empires after World War II and thrust the United States and Russia into the forefront as the two main global empires. The Cold War had begun.

The economic underpinning of America’s global reach was unprecedented. As of 1950, US output constituted a remarkable 27 percent of global output, with the Soviet Union roughly a third of that, around 10 percent. The Cold War fed two fundamental ideas that would shape American foreign policy till now. The first was that the United States was in a struggle for survival against the Soviet empire. The second was that every country, no matter how remote, was a battlefield in that global war. While the United States and the Soviet Union would avoid a direct confrontation, they flexed their muscles in hot wars around the world that served as proxies for the superpower competition.

Over the course of nearly a half century, Cuba, Congo, Ghana, Indonesia, Vietnam, Laos, Cambodia, El Salvador, Nicaragua, Iran, Namibia, Mozambique, Chile, Afghanistan, Lebanon, and even tiny Granada, among many others, were interpreted by US strategists as battlegrounds with the Soviet empire. Often, far more prosaic interests were involved. Private companies like United Fruit International and ITT convinced friends in high places (most famously the Dulles brothers, Secretary of State John Foster and CIA director Allen) that land reforms or threatened expropriations of corporate assets were dire threats to US interests, and therefore in need of US-led regime change. Oil interests in the Middle East were another repeated cause of war, as had been the case for the British Empire from the 1920s.

These wars destabilized and impoverished the countries involved rather than settling the politics in America’s favor. The wars of regime change were, with few exceptions, a litany of foreign policy failure. They were also extraordinarily costly for the United States itself. The Vietnam War was of course the greatest of the debacles, so expensive, so bloody, and so controversial that it crowded out Lyndon Johnson’s other, far more important and promising war, the War on Poverty, in the United States.

The end of the Cold War, in 1991, should have been the occasion for a fundamental reorientation of US guns-versus-butter policies. The occasion offered the United States and the world a “peace dividend,” the opportunity to reorient the world and US economy from war footing to sustainable development. Indeed, the Rio Earth Summit, in 1992, established sustainable development as the centerpiece of global cooperation, or so it seemed.

The far smarter approach will be to maintain America’s defensive capabilities but end its imperial pretensions.

THE QUARTER CENTURY since 1991 has therefore been marked by a perpetual US war in the Middle East, one that has destabilized the region, massively diverted resources away from civilian needs toward the military, and helped to create mass budget deficits and the buildup of public debt. The imperial thinking has led to wars of regime change in Afghanistan, Iraq, Libya, Yemen, Somalia, and Syria, across four presidencies: George H.W. Bush, Bill Clinton, George W. Bush, and Barack Obama. The same thinking has induced the United States to expand NATO to Russia’s borders, despite the fact that NATO’s supposed purpose was to defend against an adversary — the Soviet Union — that no longer exists. Former Soviet president Mikhail Gorbachev has emphasized that eastward NATO expansion “was certainly a violation of the spirit of those declarations and assurances that we were given in 1990,” regarding the future of East-West security.

Thus comes a fundamental choice. The United States can vainly continue the neoconservative project of unipolar dominance, even as the recent failures in the Middle East and America’s declining economic preeminence guarantee the ultimate failure of this imperial vision. If, as some neoconservatives support, the United States now engages in an arms race with China, we are bound to come up short in a decade or two, if not sooner. The costly wars in the Middle East — even if continued much less enlarged in a Hillary Clinton presidency — could easily end any realistic hopes for a new era of scaled-up federal investments in education, workforce training, infrastructure, science and technology, and the environment.

The far smarter approach will be to maintain America’s defensive capabilities but end its imperial pretensions. This, in practice, means cutting back on the far-flung network of military bases, ending wars of regime change, avoiding a new arms race (especially in next-generation nuclear weapons), and engaging China, India, Russia, and other regional powers in stepped-up diplomacy through the United Nations, especially through shared actions on the UN’s Sustainable Development Goals, including climate change, disease control, and global education.

Many American conservatives will sneer at the very thought that the United States’ room for maneuver should be limited in the slightest by the UN. But think how much better off the United States would be today had it heeded the UN Security Council’s wise opposition to the wars of regime change in Iraq, Libya, and Syria. Many conservatives will point to Vladimir Putin’s actions in Crimea as proof that diplomacy with Russia is useless, without recognizing that it was NATO’s expansion to the Baltics and its 2008 invitation to Ukraine to join NATO, that was a primary trigger of Putin’s response.

In the end, the Soviet Union bankrupted itself through costly foreign adventures such as the 1979 invasion of Afghanistan and its vast over-investment in the military. Today the United States has similarly over-invested in the military, and could follow a similar path to decline if it continues the wars in the Middle East and invites an arms race with China. It’s time to abandon the reveries, burdens, and self-deceptions of empire and to invest in sustainable development at home and in partnership with the rest of the world.

The $5 trillion wars – The cost of the wars in Afghanistan and Iraq seems invisible to politicians and the public.