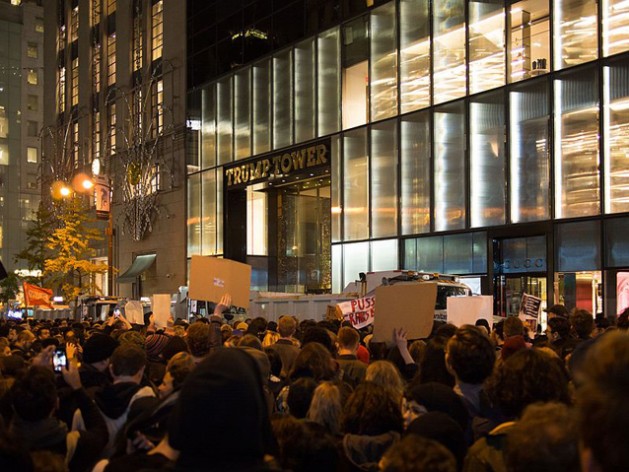 A large protest in Manhattan against the presidency of Donald Trump on November 9, 2016, the day after election day. The crowd spanned a few blocks, centered on Trump Tower. Credit: Rhododendrites . Wikimedia

11 Nov 2016 – The electoral victory of U.S. Republican Donald Trump — many have said — is an alarming signal that heralds new, difficult times. Maybe. Anyway, this victory could –and should-be seen as a symptom not as a disease.

Such disease consists of a widespread malaise, the feeling of frustration and even oppression that the majority of citizens shelter in their hearts and minds worldwide. Let alone the syndrome of unrestricted fear of everything, which has been imposed on everyone.

This atmosphere of dominating fear has lead to the rise of two opposite “political” trends— a “populist left,” like the case of Syriza in Greece and Unidos-Podemos in Spain.

And a “populist right,” such as the National Front in France, the Freedom Party in Austria, the Golden Dawn in Greece, and similar movements in Germany, The Netherlands, Hungry and even the Scandinavian countries. Now, again, also in the United States.

None of these is rigorously political or ideological and none is either purely “left” or purely “right.” These are reactions, movements and voices that sit in a glowingly empty political space.

Anyway, it is not only about just fear—it is also about a growing wave of violent extremism. Just consider the case of the unstoppable “religious” terrorism.

Meanwhile, the private financial and banking systems, which have created the on-going artificial crisis, have benefited of huge bailouts — over 5 trillion dollars paid by those very same lay citizens– to protect their pundits from the consequences of the debacle they have created.

Also meanwhile, lay citizens are forced to spend 1.7 trillion dollars a year on weapons, with more, much more to come as the wave of fake tensions rise between the West, mainly the U.S., and Russia, China, etc.

These include the deportation of 11 million undocumented people; the construction of a big wall along the US border with Mexico; the prohibition of Muslims entering the United States; all with the consequent rise or wave of xenophobia and hatred?

They also include the demolition of outgoing president Barack Obama health care system; keeping Guantanamo open and a very long list of etceteras.

— Will the new administration impose higher customs tariffs on imported foreign products; force the European –and other “allies” to pay more, much more, to their sort of “ponce” to continue protecting them?

–Will the new While House occupier dismantle the United Nations Organisations and along with it the multilateral aid system? Will he “cancel” (his words) the Paris climate agreement? And cut the US contribution to the UN? How long –or short — will it take the United Kingdom and Europe to follow?

— Will Trump presidency reduce taxes on big corporations, from the current average 35 per cent to just 15 per cent? If so, who will cover this 20 per cent gap?

— Will the new administration impose a tougher protectionist policy that would end up creating higher inflation and a bigger public deficit, this leading to a new, great recession worldwide?

— Will Trump presidency declare open commercial and political war on giant China, this transforming the on-going small, partial wars into a big nuclear one?

— Will he go further smashing human rights and dismantling the painfully achieved progress in the field of gender equality and social equality?

Common-sense would advise that candidate Trump, on taking office, will very carefully listen to the “pundits”, those really in charge—the big business, be it weapons, oil, commodities, etc.