Aleppo Update: An Inspiring Return to the Oft-Bombed National Museum

7 Dec 2016 – Of Syria’s 28 museums, the one that holds the record to date for being the most targeted by rebel bombs, mortars, and snipers is probably the National Museum, not fare from the Old City near the frontline in ancient Aleppo.

The Aleppo National Museum, which was opened in 1931 and expanded in 1966, is located just outside of the boundaries of the Ancient City of Aleppo, a World Heritage property. It houses and exhibits countless treasures of ruins and antiques spanning the history of Aleppo province and millennia of world history. It contents include thousands of objects reflecting all periods of Syrian history, including an important Islamic section. The National Museum complex includes five museums, the Prehistory Museum, the Old Oriental Museum, the Classical Museum, the Arab-Islamic Museum and the Modern Art Museum.

Like Aleppo itself, the Museum has been on UNESCO’s List of World Heritage in Danger since 2013, with its endangered status being confirmed this year during the 40th session of UNESCO’s World Heritage Committee . Like the nearby Old City of Aleppo, the Museum has suffered extensive damage the past 4 years and was heavily bombed again just four months ago, on July 11. This time being hit this time by three mortar shells, causing extensive damage to the roof and structure of the building. Also destroyed was a multi-million dollar generator and electric unit on the roof of the Museum. 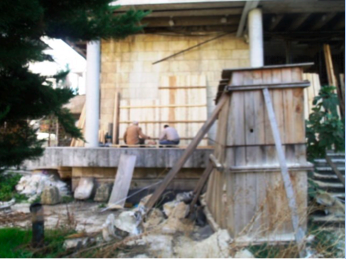 Workmen making temporary repairs to the Aleppo National Museums Admin Building following another mortar attack. To the right is one of the outdoor very heavy ‘garden antiques’ that has been wrapped in protective material, placed inside a reinforced wood.
Image by Franklin Lamb 12/4/2016

Nearly all the long narrow windows that span the west side of the Museum were blown out over a year ago when mortars pierced the roof, one severely wounding a 4 year old girl who tragically lost her arm when a rebel mortar came through the ceiling of the Exhibition Hall she was sleeping in. At the time of the attack the child was sheltering in the Museum with her father who is a museum employee.

The museum has also intermittently sustained serious damage to its adjacent administrative building. Also repeatedly damaged has been the main faÃ§ade of the museum a few meters from the large sphinx in front of the main entrance, which is shown below. Also regularly and repeatedly damaged have been the Museums exterior walls and structure, ceiling, exterior doors, offices and the outer fence, approximately 60 meters from the Museums front entrance.

Some good news is that vast majority of the Museum’s treasures have been in safe keeping since shortly after the beginning of the current crisis in March of 2011. Based on this observers survey of Syria’s museums spanning the past nearly four years, 95-plus percent of our endangered cultural heritage antiquities housed in Syria’s museums are, as of today, safe.

This is because of the stellar and leadership of Syria’s Director-General of Antiquities and Museums (DGAM), Dr. Maamoun Abdel-Karim, and his hard-working patriotic staff. Very soon after the outbreak of hostilities, and knowing well the tragedy that befell Iraq’s National Museum soon after the Bush administration invaded that country and largely destroyed it, including the shocking images of American troops standing outside Iraq’s National Museum in Bagdad and allowing its contents to be carted off by anyone who wanted to help themselves to our cultural heritage, Syria was determined that museum contents here would be protected at all costs. And so they have largely been.

DGAM launched an immediate and massive rescue operation across the country soon after the conflict began here and within months emptied the museums of all portable artifacts. Today virtually all remain packed, protected, and hidden in secure guarded sites, most deeply underground. 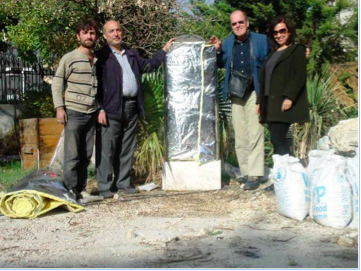 The first stage of preservation for Museum ‘garden antiquities’ is wrapping them in insulation shown above, then wrapping them in galvanized metal fencing, building a wooden crate around them and finally encasing them in cinderblocks and concrete. Aleppo
Image by Nihad Roumeih 12/4/2016

So today’s main concern for our endangered heritage at museums across Syria remains for our large archeological treasures that, given current war conditions, are too massive to transport to safety. A Syrian committee of archeologists, historians, engineers and Aleppo Museum staff meet weekly here in Aleppo to access their work and plan for post war reconstruction of the Museum buildings. The Aleppo Museum’s staff and experts are one month into a three month crash program to further secure massive antiques that are in place outside on Museum grounds and in the garden. 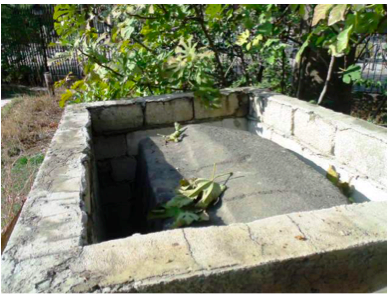 In the Aleppo National Museums garden a massive antiquity from the Byzantium period is being encased in concrete for protection from rebel mortars, scores of which have targeted Aleppo’s museum recently.
Image by Franklin Lamb, 12/4/2016

This observer has observed that at Syrian Museum sites, such as in Damascus, their designers have created very appealing outside gardens which exhibit large antiquities in a very pleasant museum park, with benches, a setting which is ideal for meeting friends and for personal contemplation among art objects from ancient civilizations. As happened last week on three occasions, this observer, whenever possible, likes to schedule meetings among the Damascus Museums well-tended palms trees and gardens.

During this week’s visit to Aleppo’s Museum after a year’s absence, what this observer witnessed being achieved was stunning and inspiring. According to Museum official, Ms. Miralda Mouchati, who gave generously of her time briefing this observer, sand bags which have been stacked around the largest objects in the Museum garden the past few years are now being largely replaced and our irreplaceable globally shared cultural heritage objects, many from deep into Syria’s ten millennia, are carefully being wrapped in protective material and then literally incased in cement as show is the photos below. 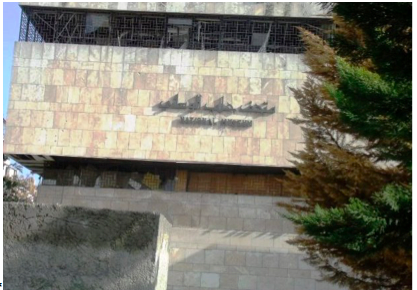 The blown out windows and doors on the front of Aleppo’s National Museum caused by a rebel mortar attack five months ago. Shown on the right is an antiquity encased in concrete.
Image by Franklin Lamb 12/4/2016

Since the start of the crisis a top priority of the Directorate General of Antiquities and Museums (DGAM) and the Ministry of Tourism under the able leadership of HE Eng. Bachir Yazigi, has been to encourage all Syrians, despite political differences, in defend their and our cultural heritage and to work together to transfer it to future generations.

Ms. Mouchati explained as this observer has personally and repeatedly observed across much of Syria these past few years, that DGAM staffers and citizen “monument volunteers” continue to be engaged in literally hundreds of similar cultural heritage protective projects, largely unreported by international media.

Each citizen risking their own safety preserving and protecting Syria’s and our endangered culture heritage are no less than global patriots whom we honor for their service to humanity as they work to preserve our past for those who will follow us.

Anticopyright: Editorials and articles originated on TMS may be freely reprinted, disseminated, translated and used as background material, provided an acknowledgement and link to the source, TMS: Aleppo Update: An Inspiring Return to the Oft-Bombed National Museum, is included. Thank you.