8 Dec 2016 – On December 10-11, the Nobel Peace Prize Forum Oslo will be launched, featuring Henry Kissinger and Zbigniew Brzezinski addressing the theme, “The U.S. and World Peace after the Presidential Election.” The Forum is intended to become an annual event closely linked to the celebrations surrounding the Nobel Peace Prize.

As many will remember, Kissinger, along with Le Duc Tho, was awarded the Nobel Peace Prize in 1973, perhaps the most controversial award in the long history of this most coveted prize. The prize in 1973 was given to the two men who negotiated the peace agreement that finally brought the war in Vietnam to a close. While the negotiations were in their most pivotal phase, the U.S. Government introduced the notorious ‘Christmas Bombing’ terrorist tactic to increase its diplomatic leverage over Hanoi, which also served to reassure its corrupt allies in Saigon that they were not being abandoned by Washington. Le Duc Tho, to his credit, citing this infamous background, refused the prize, while Kissinger accepted although he did not attend the ceremony.

What is difficult to grasp, is the thinking of the organizers of Nobel Peace Prize Forum, which led them to such infamous war-oriented political and intellectual figures as Kissinger and Brzezinski. Of course, the guardians of the Nobel are not alone. Among the many depressing features of the recent American presidential campaign was the distressing news that both Hillary Clinton and Donald Trump paid homage to Kissinger by publicizing foreign policy briefing visits with this most shaky pillar of the Washington establishment, but neither Clinton nor Trump aspire to the ideals of world peace that are supposed to animate the Nobel Peace Prize.

Kissinger’s involvement, direct and indirect, with the criminality of foreign governments that cruelly repress their own populations has been abundantly documented, set forth in a non-technical format by Christopher Hitchens in The Trial of Henry Kissinger (Verso, 2001), and in a more legal format in declassified government documents. This record establishes a strong case for investigation and likely prosecution for a long list of international crimes, including especially crimes against humanity. An NGO founded and led by the world renowned peace intellectual Fredrik Heffermehl, The Nobel Peace Prize Watch, has urged the Director of Public Prosecutions in Norway to take appropriate action with the view toward holding Kissinger criminally accountable. 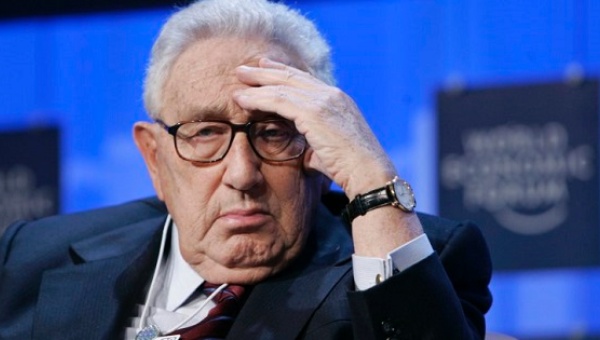 Whether Norwegian law allows its courts to proceed in such a case depends on whether universal jurisdiction is considered available to address the alleged crimes (committed outside of Norway) of Kissinger. Because of the constraints surrounding the activity of the International Criminal Court, especially in dealing with the criminality of Western states, it is particularly important that national courts act as enforcement agents of the world community and end the impunity enjoyed by those who have so frequently and fragrantly violated international criminal law. In light of the adoption by the General Assembly of the Nuremberg Principles there seems to be an adequate foundation in international customary law for national courts to accept this responsibility to raise the level of accountability in international society. The physical presence of Kissinger in Norway offers an opportunity that were we living in a world where the global rule of law prevailed would not be missed. Sadly, we are aware that in the global setting providing the backdrop for his crimes geopolitics rather than the rule of law sets the tone, and it is highly unlikely that Kissinger will be formally apprehended when he visits Norway, although popular demonstrations are certain to occur. This tension between governmental refusal to adhere to the global rule of law and societal initiatives to impose accountability explain the international pervasiveness of double standards with regard to the implementation of international criminal law: accountability for the weak, impunity for the strong.

What is equally distressing is the Orwellian insensitivity of the Nobel authorities to the inappropriateness of treating Kissinger as though he is a highly trusted source of guidance and wisdom with respect to world peace. Kissinger has applauded the worst excesses of dictators, especially in Latin America, and backed the most immoral geopolitical policies throughout his long career. He has never even pretended to be interested in promoting a more peaceful world, and has viewed the United Nations with cynical indifference unless it can be deployed to promote U.S. geopolitical goals. Indeed, Kissinger has often argued in his writings that those who pursue peace as a value or goal are those most likely to induce war. While Secretary of State, Kissinger also admits being annoyed by aides urging greater attentiveness to the relevance of international law and morality.

Even pragmatically, Kissinger is hardly a helpful guide. As a warmonger, he has generally supported the long list of failed American interventions, including Vietnam. What is uncanny about the Kissinger brand is that his repeated errors of judgment have not tarnished his reputation, nor have his distasteful moral postures lowered the level of mainstream respect. In an article recently appearing in The New Yorker (Aug. 20, 2016) Jon Lee Anderson uses declassified materials to show how Kissinger lauded the Argentinian rulers for ridding their country of terrorism in the course of the despicable ‘dirty war,’ overlooking reliance on the vile tactics of torture and ‘disappearances’ systematically used against nonviolent activists and progressives.

It is the saddest of commentaries on the mainstream approach to peace, justice, and security that Kissinger should be singled out for honors or as a source of guidance at an event in Norway, a country with one of the strongest reputations for morally oriented internationalism. Such an impression is reinforced by Nobel sponsorship. It stretches the moral imagination to its breaking point once it is realized that those in Norway who have been entrusted with carrying out the wishes of Alfred Nobel should now be adding their weighty imprimatur to such a willfully distorted conception of world peace.