Mexico: Neither Pax Mafiosa, Nor Rule of Law

The post-authoritarian political system in Mexico has become a violent symbiosis of organised crime and politics. 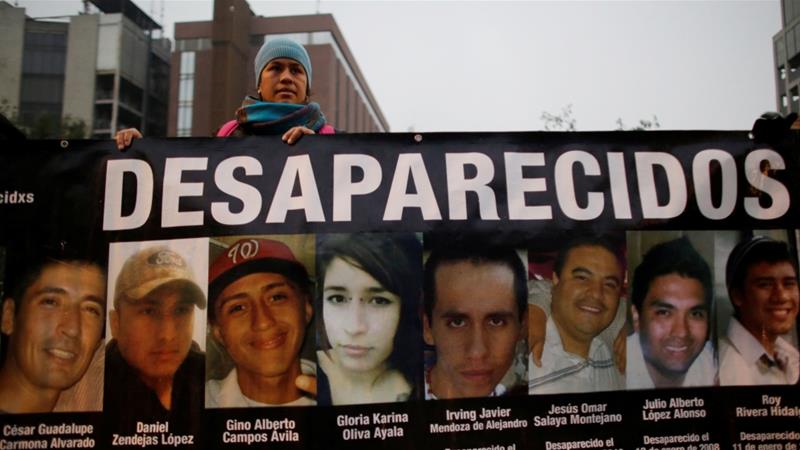 A demonstrator holds a banner with images of missing people during a demonstration demanding justice for the victims of violence, in Monterrey, Mexico [Reuters]

15 Dec 2016 – Mexico is a nation with a heritage of cultural wonders and one of the main cradles of modern civilisation. Yet, despite its much acclaimed 20th-century social revolution, Mexico never developed socially inclusive checked-and-balanced democratic political institutions subject to even a minimum standard rule of law.

Throughout its tortuous political and social history, the Mexican state was mostly led by presidents and governors promoting the looting of the Mexican people always linked to organised crimes. Today’s political leaders are no exception.

The creation of a ‘Pax Mafiosa’

For many decades, organised crime in Mexico conducted its dirty business hand-in-hand with the most powerful political elites of an authoritarian one-party state ruled by the Institutional Revolutionary Party – or PRI, by its Spanish acronym, which, by the way, is the same party in power today.

Within this political scenario, the one-party state operationally “managed” different organised crime networks with an iron fist in order to serve the PRI’s political machinery and the economic enrichment of its members, all within a “Pax Mafiosa”.

In those days of a one-party rule, there was no space for organised crime groups to compete with each other and even less space to challenge an all mighty one-party authoritarian regime.

One-party state officials allocated each “cartel” to a criminal market -legal and illegal drugs, human trafficking, counterfeit and other goods and services. This authoritarian set-up explains the relative lack of mob violence for many decades.

As a result of globalised democratisation movements following the fall of the Berlin Wall, Mexico’s political one-party elite also became part of the “Washington Consensus” by instituting multi-party elections aimed in theory at establishing a democratic electoral process.

A multi-party electoral process did start as a result, but it was still “managed” through a political agreement, coordinated by the PRI, based on not introducing institutional controls on high-level corruption and on managing elections through dirty money funding all parties and most of its politicians.

This democratic facade unleashed the old criminal 1940s drug trafficking and human trafficking networks and allowed violent competition between them. Like piranhas they have been competing to buy political protection of their criminal markets. They got involved with fragments of the armed and police forces, generating the most extreme forms of political and economic violence against Mexican society. What followed amounted to crimes against humanity: unprecedented numbers of forced disappearances and human trafficking.

As an adviser to the authorities on establishing judicial and intelligence mechanisms to dismantle political-criminal networks, I have witnessed first-hand how members of organised crime have detained and harassed federal electoral prosecutors who uncovered evidence of vote-buying.

OPINION: Getting away with murder in Mexico

The federal prosecutors involved in this operation were later detained, harassed and threatened for hours by officers from the Chiapas state police, while the high-level official was set free under political pressure.

Another case is the arrest of the world-infamous Mexican Sinaloa cartel boss Joaquin “El Chapo” Guzman Loera – one of the richest people on the planet. The Mexican government took sides in an internal Sinaloa cartel leadership struggle and, after capturing “El Chapo” in February 2014 and recapturing him in January of this year, not even one of the hundreds of top politicians and businesspersons in his pocket was arrested or indicted and none of his vast fortune was judicially forfeited or frozen. This is the golden rule of state-driven mafias: the mafia-leadership may change but the political-criminal network stays intact.

All countries in the world have organised crime networks operating within their territory, but governable countries control the most serious crimes and the most extreme forms of mass violence either through abhorrent authoritarian extrajudicial repression or through the much more desired functional democracy with rule of law.

For example, authoritarian political regimes, such as in China, Iran, Russia or Sudan do at present “manage” their organised crime groups with an iron fist to serve their political elites through a “pax mafiosa”.

On the other hand, functional or even dysfunctional democracies, such as Spain or Italy, imperfectly provide economic, intelligence and judicial controls to restrain dirty money from flowing into politics by dismantling the most serious organised crime groups within the state.

One could argue that the United States with its uncontrolled drug consumption epidemic is to blame for Mexico’s nightmarish reality.

However, we do not see high levels of Canadian organised crime engaged in forced disappearances or in hundreds of thousands of murders.

Canada does not experience uncontrolled violence because the legislative, judicial and executive economic controls do function, thus precluding the mafia-capture of the Canadian political system.

As I have argued before, this situation can be resolved by filling institutional vacuums with at least three types of auditing and investigative controls, instituted separately through the legislative, judiciary and executive branches.

This is to ensure that politicians cannot finance their campaigns and public debt with dirty money, thus aborting a future democracy. The vacuum of these three types of financial and economic controls at present subsidise a highly enriched political class living the high life in US and European private mansions bought with undeclared money.

Furthermore, since the Mexican multi-party political transition started, the “party-list” electoral system has served the PRI elite and many politicians in other Mexican parties.

Party lists of candidates are devised through the “dedazos” (or “big fingers”) of corrupt party bosses with total discretion in selecting candidates without any democratic voting in open primaries.

Therefore, this is a clear invitation for organised crime to incorporate their criminals into party lists behind closed doors in exchange for dirty money flowing to party bosses.

International experience indicates that an electoral reform is required to preclude this criminalisation of politics through the establishment of “first-past-the-post” electoral contests subject to three parallel and independent economic audits of all political candidates.

These anti-mafia political/electoral reforms must come first before any genuine judicial or anti-corruption reforms are even proposed. By simple logic, it is ridiculous to expect that the current mafia-driven political “elite” in Mexico will engage in anti-mafia judicial reforms – three outrageously expensive “window dressing” judicial reforms since 1994 have proved this point.

Given past successful international anti-mafia experiences in Colombia and in Italy, one can expect that these recommended Mexican political reforms will only be implemented through international political pressure from European and North American governments coupled with a much more unified and massive pressure from the Mexican civil society.

Past international experience shows that under these two high-pressure conditions, the political elites will be indicted and the bloodiest chapter in modern Mexican history may come to an end thus giving democracy and the rule of law the chance to flourish.

Edgardo Buscaglia directs field teams with experience since 1990 in 114 countries worldwide advising public authorities and civil societies on combating and preventing the expansion of criminal networks. He is a Senior Law and Economics Scholar at Columbia University in New York, USA and the President of the Institute for Citizens’ Democracy and Rule of Law in Mexico.