Leader says outsiders are ‘concentrating on the negative side’ of what the UN and Malaysia claim is ethnic cleansing of the Rohingya Muslim minority. 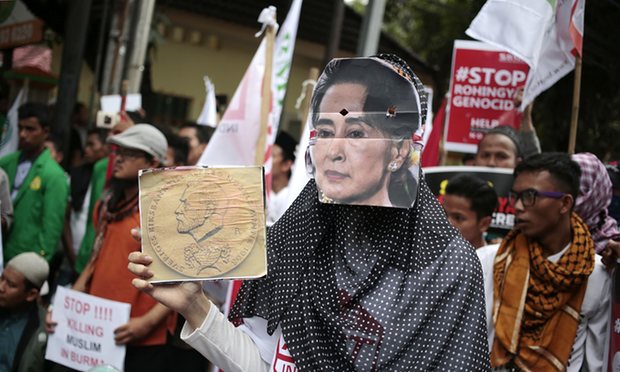 A Muslim woman wears an Aung San Suu Kyi mask during a rally against the persecution of Rohingya. Photograph: Dita Alangkara/AP

3 Dec 2016 – Myanmar leader Aung San Suu Kyi accused the international community on Friday [2 Dec] of stoking resentment between Buddhists and Muslims in the country’s northwest, where an army crackdown has killed at least 86 people and sent 10,000 fleeing to Bangladesh.

Aung San Suu Kyi appealed for understanding of her nation’s ethnic complexities, and said the world should not forget the military operation was launched in response to attacks on security forces that the government has blamed on Muslim insurgents.

“I would appreciate it so much if the international community would help us to maintain peace and stability, and to make progress in building better relations between the two communities, instead of always drumming up cause for bigger fires of resentment,” Aung San Suu Kyi told Singapore state-owned broadcaster Channel News Asia during a visit to the city-state.

“It doesn’t help if everybody is just concentrating on the negative side of the situation, in spite of the fact that there were attacks against police outposts.”

The violence in the northwest poses the biggest challenge so far to Aung San Suu Kyi’s eight-month-old government, and has renewed international criticism that the Nobel Peace Prize winner has done too little to help the country’s Rohingya Muslim minority.

Her comments come as Malaysia said Myanmar’s treatment of the Rohingya amounted to “ethnic cleansing”.

“The fact that only one particular ethnicity is being driven out is by definition ethnic cleansing,” Malaysia’s foreign ministry said in a statement.

“This practice must stop, and must be stopped immediately in order to bring back security and stability to the Southeast Asian region.”

Muslim-majority Malaysia has been increasingly critical of Myanmar’s handling of violence in northern Rakhine state.

Soldiers have poured into the north of Rakhine State, close to the frontier with Bangladesh, after attacks on border posts on 9 October that killed nine police officers. Humanitarian aid has been cut off to the area, which is closed to outside observers.

Myanmar’s military and the government have rejected allegations by residents and human rights groups that soldiers have raped Rohingya women, burned houses and killed civilians during the operation.

Aung San Suu Kyi’s remarks came as a commission led by former United Nations chief Kofi Annan arrived in the state, where ethnic Rakhine Buddhists and Rohingya Muslims have lived separately since clashes in 2012 in which more than 100 people were killed.

Despite often having lived in Myanmar for generations, most of the country’s 1.1 million Rohingya are denied citizenship, freedom of movement and access to basic services such as healthcare and education.

The UN’s human rights agency said this week that abuses suffered by the Rohingya may amount to a crimes against humanity, repeating a statement it first made in a June report.

The Rohingya are not among the 135 ethnic groups recognised by law in Myanmar, where many majority Buddhists refer to them as “Bengalis” to indicate they regard them as illegal immigrants from Bangladesh.

In northern Rakhine, one of the poorest parts of the country, Muslims outnumber the ethnic Rakhine population.

“In the Rakhine, it’s not just the Muslims who are nervous and worried,” said Suu Kyi. “The Rakhine are worried too. They are worried about the fact that they are shrinking as a Rakhine population, percentage-wise.”

UN officials said this week more than 10,000 people have fled the recent fighting to Bangladesh.

There are continuing reports of people fleeing across the river border in flimsy boats, bringing accounts of razed villages, uprooted communities and separated families.

Still, Aung San Suu Kyi said the government has “managed to keep the situation under control and to calm it down”.