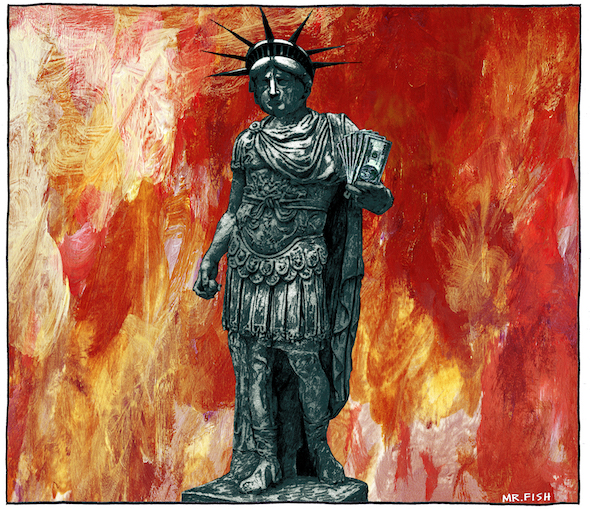 The rich never have enough. The more they get, the more they want. It is a disease. CEOs demand and receive pay that is 200 times what their workers earn. And even when corporate executives commit massive fraud, such as the billing of hundreds of thousands of Wells Fargo customers for accounts they never opened, they elude punishment and personally profit. Disgraced CEO John Stumpf left Wells Fargo with a pay package that averages nearly $15 million a year. Richard Fuld received nearly half a billion dollars from 1993 to 2007, a time in which he was bankrupting Lehman Brothers.

The list of financial titans, including Trump, who have profited from a rigged financial system and fraud is endless. Many in the 1 percent make money by using lobbyists and bought politicians to write self-serving laws and rules and by forming unassailable monopolies. They push up prices on products or services these monopolies provide. Or they lend money to the 99 percent and charge exorbitant interest. Or they use their control of government and the courts to ship jobs to Mexico or China, where wages can be as low as 22 cents an hour, and leave American workers destitute. Neoliberalism is state-sponsored extortion. It is a vast, nationally orchestrated Ponzi scheme.

This fevered speculation and mounting inequality, made possible by the two ruling political parties, corroded and destroyed the mechanisms and institutions that permitted democratic participation and provided some protection for workers. Politicians, from Reagan on, were handsomely rewarded by their funders for delivering their credulous supporters to the corporate guillotine. The corporate coup created a mafia capitalism. This mafia capitalism, as economists such as Karl Polanyi and Joseph Stiglitz warned, gave birth to a mafia political system. Financial and political power in the hands of institutions such as Goldman Sachs and the Clinton Foundation becomes solely about personal gain. The Obamas in a few weeks will begin to give us a transparent lesson into how service to the corporate state translates into personal enrichment.

Adam Smith wrote that profits are often highest in nations on the verge of economic collapse. These profits are obtained, he wrote, by massively indebting the economy. A rentier class, composed of managers at hedge funds, banks, financial firms and other companies, makes money not by manufacturing products but from the control of economic rents. To increase profits, lenders, credit card companies and others charge higher and higher interest rates. Or they use their monopolies to gouge the public. The pharmaceutical company Mylan, in a classic example, raised the price of an epinephrine auto-injector used to treat allergy reactions from $57 in 2007 to about $500.

These profits are counted as economic growth. But this is a fiction, a sleight of hand, like unemployment statistics or the consumer price index, used to mask the speculative shell game.

“The head of Goldman Sachs came out and said that Goldman Sachs workers are the most productive in the world,” the economist Michael Hudson told me. “That’s why they’re paid what they are. The concept of productivity in America is income divided by labor. So if you’re Goldman Sachs and you pay yourself $20 million a year in salary and bonuses, you’re considered to have added $20 million to GDP, and that’s enormously productive.”

“We’re talking with tautology,” said Hudson, the author of “Killing the Host: How Financial Parasites and Debt Bondage Destroy the Global Economy.” “We’re talking with circular reasoning here. So the issue is whether Goldman Sachs, Wall Street and predatory pharmaceutical firms actually add product or whether they’re just exploiting other people. That’s why I used the word ‘parasites’ in my book’s title. People think of a parasite as simply taking money, taking blood out of a host or taking money out of the economy. But in nature it’s much more complicated. The parasite can’t simply come in and take something. First of all, it needs to numb the host. It has an enzyme so that the host doesn’t realize the parasite’s there. And then the parasites have another enzyme that takes over the host’s brain. It makes the host imagine that the parasite is part of its own body, actually part of itself and hence to be protected. That’s basically what Wall Street has done. It depicts itself as part of the economy. Not as a wrapping around it, not as external to it, but actually the part that’s helping the body grow, and that actually is responsible for most of the growth. But in fact it’s the parasite that is taking over the growth.”

“The result is an inversion of classical economics,” Hudson said. “It turns Adam Smith upside down. It says what the classical economists said was unproductive parasitism actually is the real economy. And that the parasites are labor and industry that get in the way of what the parasite wants, which is to reproduce itself, not help the host, that is, labor and capital.”

The established elites dislike Trump because he is gauche, vulgar and boorish. He is not part of the refined group of mandarins trained to become plutocrats in Ivy League universities and business schools. He never mastered the cloying patina of refinement and carefully calibrated rhetoric of our courtier class.

Trump and his coterie of half-wits, criminals, racists and deviants play the role of the Snopes clan in William Faulkner’s novels “The Hamlet,” “The Town” and “The Mansion.” The Snopeses rose up out of the power vacuum of the decayed South and ruthlessly seized control from the degenerated aristocratic elites. Flem Snopes and his extended family—which includes a killer, a pedophile, a bigamist, an arsonist, a mentally disabled man who copulates with a cow, and a relative who sells tickets to witness the bestiality—are fictional representations of the scum we have elevated to the highest level of the federal government. They embody the ethos of modern capitalism Faulkner warned us against.

“The usual reference to ‘amorality,’ while accurate, is not sufficiently distinctive and by itself does not allow us to place them, as they should be placed, in a historical moment,” the critic Irving Howe wrote of the Snopeses. “Perhaps the most important thing to be said is that they are what comes afterwards: the creatures that emerge from the devastation, with the slime still upon their lips.”

“Let a world collapse, in the South or Russia, and there appear figures of coarse ambition driving their way up from beneath the social bottom, men to whom moral claims are not so much absurd as incomprehensible, sons of bushwhackers or muzhiks drifting in from nowhere and taking over through the sheer outrageousness of their monolithic force,” Howe wrote. “They become presidents of local banks and chairmen of party regional committees, and later, a trifle slicked up, they muscle their way into Congress or the Politburo. Scavengers without inhibition, they need not believe in the crumbling official code of their society; they need only learn to mimic its sounds.”

The Snopes-like mentality of our president-elect is portrayed in a documentary movie, “The Queen of Versailles,” about another sleazy developer. The film, by Lauren Greenfield, chronicles the tawdry and insatiable greed of David Siegel and his ditzy trophy wife, Jackie, who is three decades younger, and their quest to build one of the largest private residences in the United States, a 90,000-square-foot mansion modeled after Versailles. Siegel and his wife, who once dated Trump, are fervent Trump supporters. Siegel, like Trump, is a barely literate philistine. He, like the president-elect, sponsored beauty pageants, was accused of sexual assault, made his money through high-pressure sales tactics and had access to hundreds of millions in bank loans. And he, like Trump, uses bankruptcy or the threat of bankruptcy to protect his wealth. And like our next president he has a volatile and vicious temper.

“The great Roman historians Livy and Plutarch blamed the decline of the Roman Empire on the creditor class being predatory, and the latifundia,” Hudson said. “The creditors took all the money, and would just buy more and more land, displacing the other people. The result in Rome was a dark age, and that can last a very long time. The dark age is what happens when the rentiers take over.”

“If you look back in the 1930s, Leon Trotsky said that fascism was the inability of the socialist parties to come forth with an alternative,” Hudson said. “If the socialist parties and media don’t come forth with an alternative to this neofeudalism, you’re going to have a rollback to feudalism. But instead of the military taking over the land, as occurred with the Norman Conquest, you take over the land financially. Finance has become the new mode of warfare.”

“You can achieve the takeover of land and the takeover of companies by corporate raids,” he said. “The Wall Street vocabulary is one of conquest and wiping out. You’re having a replay in the financial sphere of what feudalism was in the military sphere.”

What comes next, history has shown, will not be pleasant. A cruel and morally bankrupt elite, backed by the organs of state security and law enforcement, will, as the Eupatridae did in sixth-century-B.C. Athens, bankrupt the citizenry through state-sponsored theft, war, austerity and debt peonage. They will reduce workers to the status of serfs or slaves. The most benign dissent will be criminalized and crushed. America’s Snopes-like elites have no external or internal constraints. They are barbarians. We will remove them from power or enter a new dark age.

One Response to “The Mafia State”