The ‘Rebels’ of Aleppo Are No Heroes

We refer to them as ‘rebels’ – as if they were the Maquis fighting in the French resistance or Partisans freeing Yugoslavia from the Nazis or, indeed, the insurgents of Warsaw struggling for freedom from the German SS. Which they clearly are not. 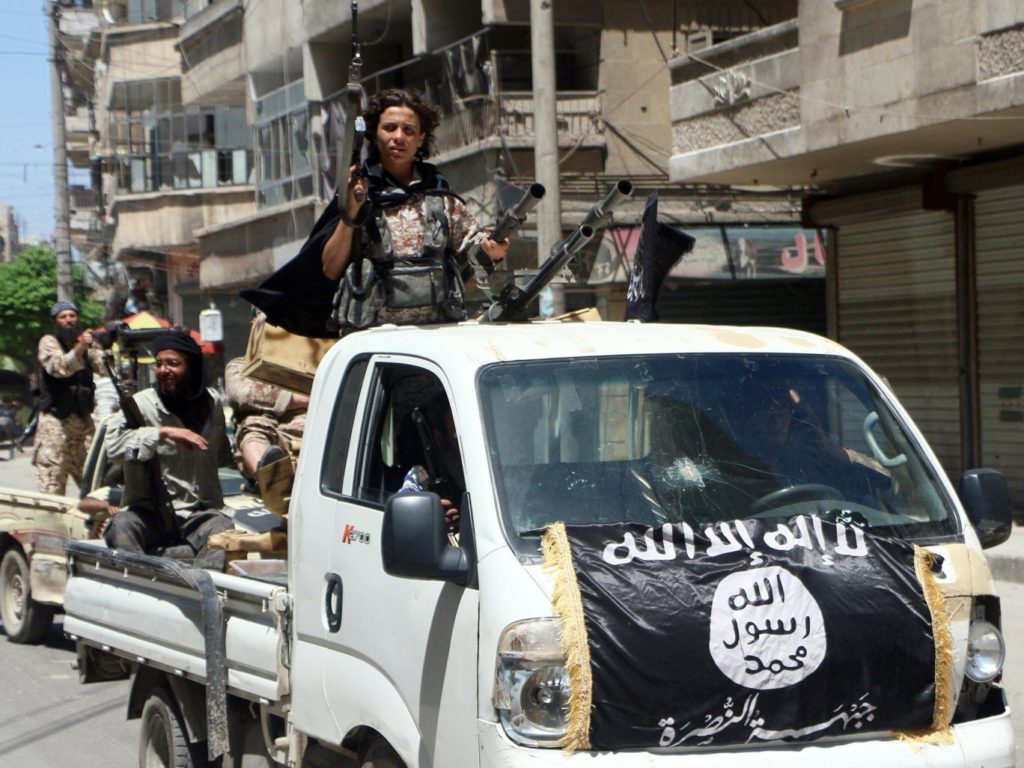 8 Dec 2016 – I’ve just spent hours watching footage of the siege. The pictures are familiar: planes fall like vultures through the sky and buildings are blown apart, children are brought to hospitals covered in blood, bodies are buried in shallow graves, hospitals themselves are repeatedly bombed, entire districts of the city turned to rubble, civilians flee their homes amid burning buildings. Rescue workers tug at the living and the dead amid the wreckage of the city. America and Britain demand an end to the destruction but do nothing. And Russia cynically and cruelly allows the innocent to die. Readers will know exactly what I am describing.

The Warsaw Uprising, of course, 1944, not 2016. The scenes are eerily familiar to all that other blood-soaked footage from Aleppo we’ve been watching more recently – but, in one critical way, very different. For the fighters of the Home Army in Poland – ‘rebels’ against German occupation, patriots loyal to the Polish government in London – appear constantly in the old black-and-white film of the Warsaw Uprising. Their own military targets are attacked by their enemy. Civilians are seen queuing for weapons to fight alongside the insurgents.

Not exactly what you see in the terrifying film from eastern Aleppo this past year, where not a single ‘rebel’ can be identified – save for carefully posed shots in their own propaganda productions – and where every target is a hospital or a civilian home. And anyone who believes the French nonsense about Aleppo becoming the “worst massacre since World War Two” should study the stunning films I’ve been watching in the Polish Museum of the Warsaw Uprising. 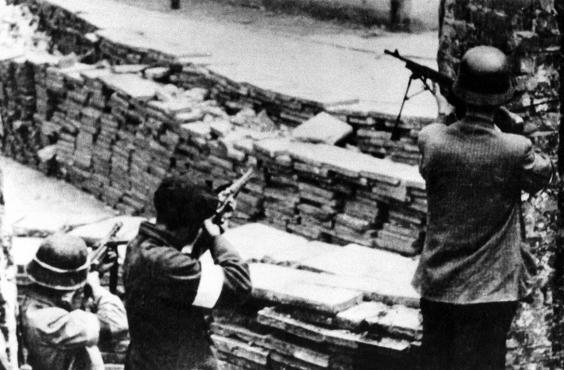 In the first week, the Nazis and their allies murdered up to 40,000 civilians. The Warsaw Rising was to last for only 63 days, but the death toll was up to 200,000 – half the total deaths of the entire Syrian war, even by the dodgy statistics upon which journalists currently depend. Warsaw in 1944 was total war indeed – even if we forget later massacres of even greater bloodshed: the Korean War, the Vietnam War, the 1991 and 2003 Iraqi wars, the Afghan wars, the Algerian war of independence against the French with a minimum of a million dead, which the French appear to have forgotten. The “worst massacre since World War Two” indeed!

But now a reminder of the tragedy of Warsaw. By mid-summer of 1944, Russian troops had smashed through the German armies in the east on their way to Berlin, and reached the eastern banks of the Vistula river opposite the very centre of Warsaw. Nazi troops had already begun to evacuate the city and retreat towards the Polish-German border. The Polish ‘Home Army’ of General Tadeusz ‘Bor’-Komorowski, with the full knowledge of the Allied-supported Polish government-in-exile in London, decided that the moment had come to liberate Warsaw from the Nazis – at 5pm on 1 August, 1944.

It was a calculated, daring and disastrous decision. Komorowski wanted to strike when the Germans were retreating – but before the Russians could ‘liberate’ Warsaw themselves and impose a Communist government on the once independent Polish nation. Britain and France had declared war on Germany in 1939, after Hitler attacked Poland – but they were powerless to help. Besides, Churchill and Stalin had already agreed that Poland would fall under Soviet ‘influence’ in post-war Europe.

The Germans meanwhile brought in SS reinforcements and, on Hitler’s specific orders, razed the entire city of Warsaw to the ground while the Russians watched from the other side of the Vistula – and did nothing. They were quite happy to allow the Nazis to crush the 50,000 armed nationalist Poles of the Home Army – leaving Warsaw to be ‘freed’ by the Russians in January 1945 and a Communist government imposed on the survivors.

This is a necessarily truncated and simplified version of those terrible moments of history. The British and Americans deliberately delayed air drops of arms and medicine to the Poles in Warsaw and even refused to send the fully trained Polish Parachute Brigade to help them. RAF crews did volunteer to fly from Brindisi to Warsaw but were shot at by Russian as well as German artillery. An escaped British POW, RAF Lieutenant John Ward, actually joined the Home Army, the ‘Armia Krajowa’ (AK), fighting in the Rising and sending 64 reports of the battle to The Times in London. Other foreigners, including Ukrainians, even Azerbaijanis, fought alongside the Poles, as well as Jewish survivors of the Warsaw Ghetto rising of 1943.

Members of al Qaeda’s branch in Syria. The group has now rebranded in an attempt to give the impression it’s no longer connected to al Qaeda.
Mike Segar/Reuters

So back once more to Aleppo. No-one doubts that foreigners are fighting alongside Jabhat al-Nusra/Al-Qaida and the Salafist Ahrar al-Sham and other groups around the city. But, oddly, that’s not what we call them. We refer to them as ‘rebels’ – as if they were the Maquis fighting in the French resistance or Partisans freeing Yugoslavia from the Nazis or, indeed, the insurgents of Warsaw struggling for freedom from the German SS. Which they clearly are not. And while we know that the ‘rebels’ of eastern Aleppo have died fighting bravely, we also know that they have executed their internal enemies, slit the throats of their prisoners and that – well, since Jabhat al-Nusra is al-Qaida (and has since changed its name yet again) – they have flown passenger aircraft into very tall buildings in New York.

Which the Polish resistance would not dream of doing. Indeed, in the footage shot by four named ‘war photographers’ for the Home Army’s commander – their films were actually shown at a Warsaw cinema during the Rising – you can see captured German officers and men surrendering to the Poles, handing over their weapons and then being fed – and set to work building barricades for the defenders of Warsaw. The film subtitles even comment on the surprise of the German forces that they were not executed – as Poles were murdered at the hands of the Nazis.

But back to the terrifying website and Facebook pictures that we still see from eastern Aleppo. Why do we not see the defending fighters, as we do on the Warsaw films? Why are we not told their political allegiance, as we most assuredly are on the Warsaw footage? Why do we not see ‘rebel’ military hardware – as well as civilian targets – being hit by artillery and air attack as we do on the Polish newsreels? Or civilians lining up for weapons to help the ‘rebels’ defend eastern Aleppo – as Polish civilians, prepared to defend their city, were filmed in Warsaw?

No, this does not mean that the pictures of wounded and dead children in eastern Aleppo are fake. Nor does it mean that the Syrian army or the Hizballah or the Iranians or Iraqi Shiites are playing by the rules of war. In the Syrian conflict, there are no rules – except those made up on the spur of the moment for tactical military reasons – and there are no ‘good guys’ in civil wars. The battle of east Aleppo is vile and brutal. The Syrian military cannot – and does not – pretend that it has not killed civilians. Although, until recently, civilian casualties of artillery shells on western Aleppo fired by the ‘rebels’ – so constantly given that blessed anonymity by us in the press – have been almost totally ignored.

My colleague Patrick Cockburn has expressed his own deep unease at the coverage of the Aleppo siege. For months, Western reporters have failed to state the obvious: that they cannot send their dispatches from ‘rebel’ areas because the ‘rebels’ would slit their throats open – or hand them over to other ‘rebels’ who would. And thus the ‘rebels’ have been tuned out of the story except for that one amorphous description. And the more anonymous they become, the braver they appear – fighters whose predecessors fought the Nazis in the Second World War rather than foreign-paid and armed opponents of the Syrian regime. And, by the same token, what better way of painting the besiegers of eastern Aleppo as descendants of the SS?

If we could call Saddam the ‘Hitler of Baghdad’ and Milosevic the ‘Butcher of Bosnia’ and Nasser the ‘Mussolini of the Nile’ (as Eden actually did call him), then World War II goes on forever. Take a trip to Warsaw today, however, and you’ll quickly learn that the Poles are a deeply betrayed people, and perhaps – constantly divided by three neighbouring powers (Austro-Hungary, Germany and Russia) as the Kurds are divided by four neighbouring powers (Syria, Iraq, Iran and Turkey) – they were born to be betrayed. But their struggle shows up the Aleppo battle in a very different light from that in which we are currently portraying it.

So if you want to make parallels between Syria and the Second World War, for heaven’s sake spot the difference. Civilians are always heroes, in Warsaw or Syria. So were the fighters of Warsaw. But are the ‘rebels’ of Aleppo heroes?