It is too dangerous for journalists to operate in rebel-held areas of Aleppo and Mosul. But there is a tremendous hunger for news from the Middle East, so the temptation is for the media give credence to information they get second hand. 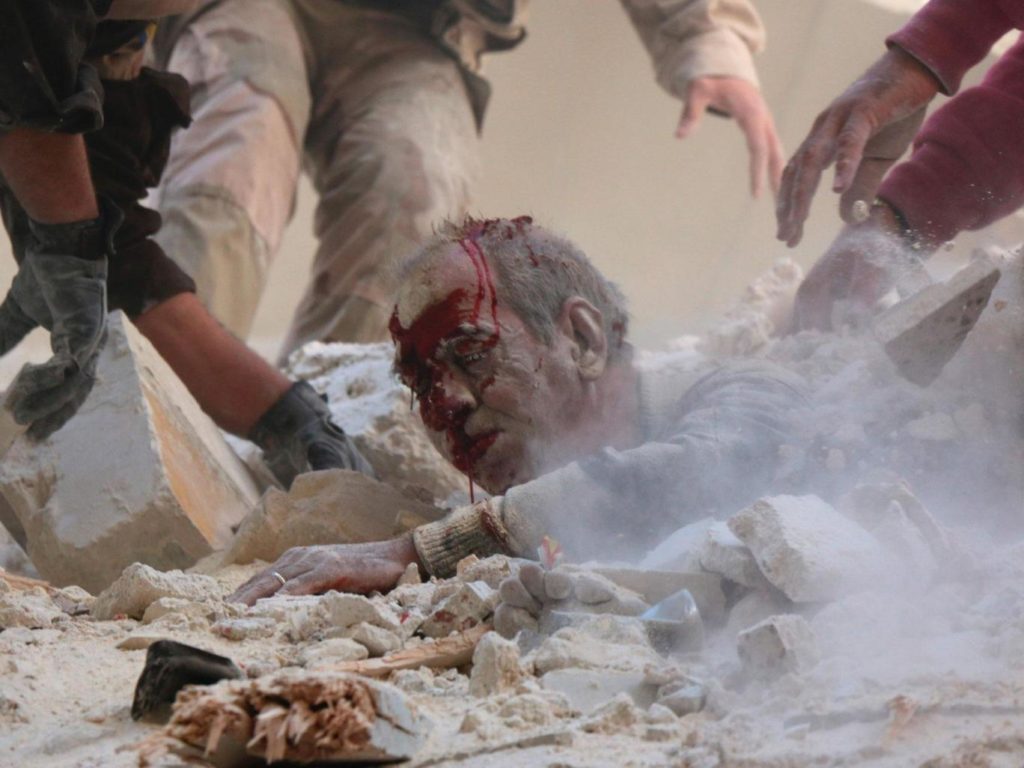 Syrian rescue workers and residents try to pull a man out from under the rubble of a building following a reported air strike on the rebel-held neighbourhood of Salhin in the northern city of Aleppo. AFP

2 Dec 2016 – The Iraqi army, backed by US-led airstrikes, is trying to capture east Mosul at the same time as the Syrian army and its Shia paramilitary allies are fighting their way into east Aleppo. An estimated 300 civilians have been killed in Aleppo by government artillery and bombing in the last fortnight, and in Mosul there are reportedly some 600 civilian dead over a month.

Despite these similarities, the reporting by the international media of these two sieges is radically different.

In Mosul, civilian loss of life is blamed on Isis, with its indiscriminate use of mortars and suicide bombers, while the Iraqi army and their air support are largely given a free pass. Isis is accused of preventing civilians from leaving the city so they can be used as human shields.

Contrast this with Western media descriptions of the inhuman savagery of President Assad’s forces indiscriminately slaughtering civilians regardless of whether they stay or try to flee. The UN chief of humanitarian affairs, Stephen O’Brien, suggested this week that the rebels in east Aleppo were stopping civilians departing – but unlike Mosul, the issue gets little coverage.

One factor making the sieges of east Aleppo and east Mosul so similar, and different, from past sieges in the Middle East, such as the Israeli siege of Beirut in 1982 or of Gaza in 2014, is that there are no independent foreign journalists present. They are not there for the very good reason that Isis imprisons and beheads foreigners while Jabhat al-Nusra, until recently the al-Qaeda affiliate in Syria, is only a shade less bloodthirsty and generally holds them for ransom.

These are the two groups that dominate the armed opposition in Syria as a whole. In Aleppo, though only about 20 per cent of the 10,000 fighters are Nusra, it is they – along with their allies in Ahrar al-Sham – who are leading the resistance. 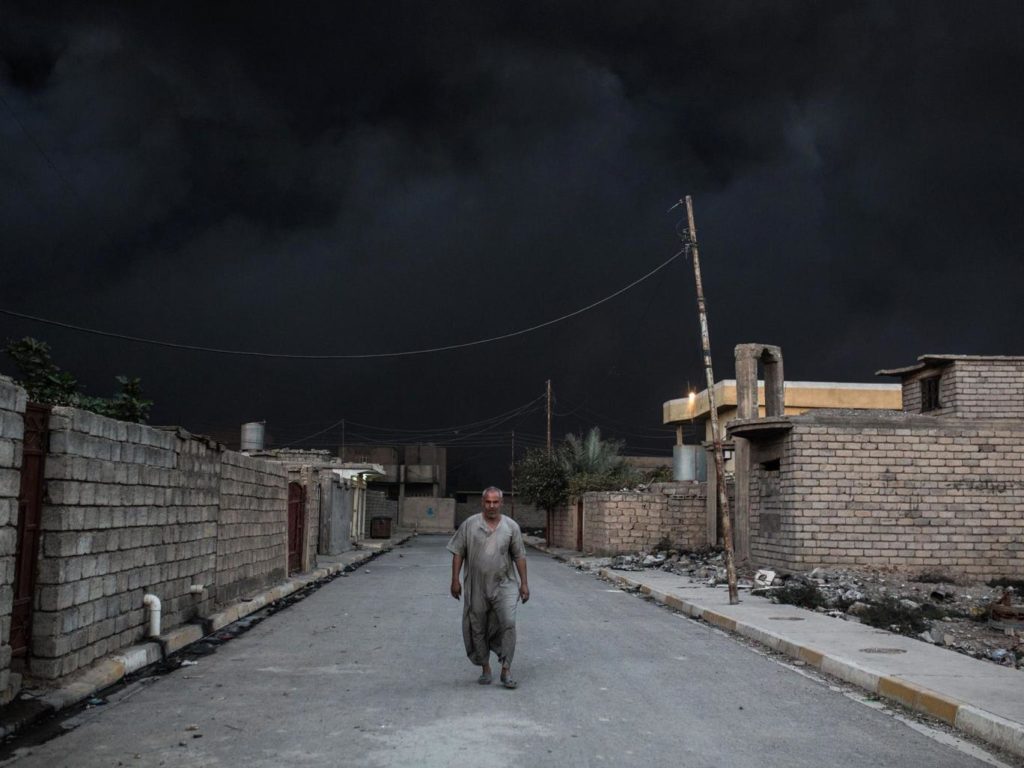 An Iraqi man walks on a street covered with smoke after an oil fire was set ablaze in the Qayyarah area, south of Mosul AFP/Getty

Unsurprisingly, foreign journalists covering developments in east Aleppo and rebel-held areas of Syria overwhelmingly do so from Lebanon or Turkey. A number of intrepid correspondents who tried to do eyewitness reporting from rebel-held areas swiftly found themselves tipped into the boots of cars or otherwise incarcerated.

Experience shows that foreign reporters are quite right not to trust their lives even to the most moderate of the armed opposition inside Syria. But, strangely enough, the same media organisations continue to put their trust in the veracity of information coming out of areas under the control of these same potential kidnappers and hostage takers. They would probably defend themselves by saying they rely on non-partisan activists, but all the evidence is that these can only operate in east Aleppo under license from the al-Qaeda-type groups.

It is inevitable that an opposition movement fighting for its life in wartime will only produce, or allow to be produced by others, information that is essentially propaganda for its own side. The fault lies not with them but a media that allows itself to be spoon-fed with dubious or one-sided stories.

For instance, the film coming out of east Aleppo in recent weeks focuses almost exclusively on heartrending scenes of human tragedy such as the death or maiming of civilians. One seldom sees shots of the 10,000 fighters, whether they are wounded or alive and well.

None of this is new. The present wars in the Middle East started with the US-led invasion of Iraq in 2003 which was justified by the supposed threat from Saddam Hussein’s possession of weapons of mass destruction (WMD). Western journalists largely went along with this thesis, happily citing evidence from the Iraqi opposition who predictably confirmed the existence of WMD.

Some of those who produced these stories later had the gall to criticise the Iraqi opposition for misleading them, as if they had any right to expect unbiased information from people who had dedicated their lives to overthrowing Saddam Hussein or, in this particular case, getting the Americans to do so for them.

Much the same self-serving media credulity was evident in Libya during the 2011 Nato-backed uprising against Muammar Gaddafi.

Atrocity stories emanating from the Libyan opposition, many of which were subsequently proved to be baseless by human rights organisations, were rapidly promoted to lead the news, however partial the source.

The Syrian war is especially difficult to report because Isis and various al-Qaeda clones made it too dangerous to report from within opposition-held areas. There is a tremendous hunger for news from just such places, so the temptation is for the media give credence to information they get second hand from people who could in practice only operate if they belong to or are in sympathy with the dominant jihadi opposition groups.

It is always a weakness of journalists that they pretend to excavate the truth when in fact they are the conduit rather than the originator of information produced by others in their own interests. Reporters learn early that people tell them things because they are promoting some cause which might be their own career or related to bureaucratic infighting or, just possibly, hatred of lies and injustice.

A word here in defence of the humble reporter in the field: usually, it is not he or she, but the home office or media herd instinct, that decides the story of the day. Those closest to the action may be dubious about some juicy tale which is heading the news, but there is not much they can do about it.

Thus, in 2002 and 2003, several New York Times journalists wrote stories casting doubt on WMD only to find them buried deep inside the newspaper which was led by articles proving that Saddam had WMD and was a threat to the world.

Journalists and public alike should regard all information about Syria and Iraq with reasoned scepticism. They should keep in mind the words of Lakhdar Brahimi, the former UN and Arab League Special Envoy to Syria. Speaking after he had resigned in frustration in 2014, he said that “everybody had their agenda and the interests of the Syrian people came second, third or not at all”.

The quote comes from The Battle for Syria: International Rivalry in the New Middle East by Christopher Phillips, which is one of the best informed and non-partisan accounts of the Syrian tragedy yet published. He judiciously weighs the evidence for rival explanations for what happened and why. He understands the degree to which the agenda and pace events in Syria were determined externally by the intervention of foreign powers pursuing their own interests.

Overall, government experts did better than journalists, who bought into simple-minded explanations of developments, convinced that Assad was always on the verge of being overthrown.

Phillips records that at a high point of the popular uprising in July 2011, when the media was assuming that Assad was finished, that the long-serving British ambassador in Damascus, Simon Collis, wrote that “Assad can still probably count on the support of 30-40 per cent of the population.”

The French ambassador Eric Chevallier was similarly cautious, only to receive a classic rebuke from his masters in Paris who said: “Your information does not interest us. Bashar al-Assad must fall and will fall.”