Assange ‘1,000%’ Sure Russia Wasn’t Source of US Election Leaks

Julian Assange argued that the debate about Russian influence on the U.S. election is an attempt to delegitimize Trump. 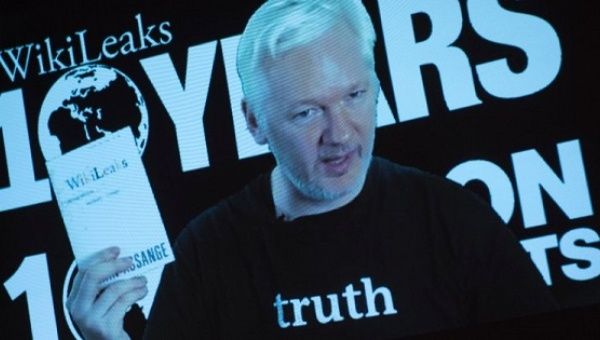 3 Jan 2017 – WikiLeaks founder Julian Assange has reiterated once again that the whistleblowing organization did not obtain leaked U.S. Democratic Party emails from Russia, insisting that the Obama administration is attempting to “delegitimize” President-elect Donald Trump ahead of his inauguration with claims of Russian influence in the bitter election.

“We can say, we have said, repeatedly that over the last two months that our source is not the Russian government and it is not a state party,” Assange said in an interview with Fox News’ Sean Hannity in the embassy of Ecuador in London, where he has been holed up for the past four years.

In the interview set to air Tuesday night, Hannity — an outspoken Trump supporter — asked Assange if he could confirm “unequivocally” and with “1,000 percent” certainty that Russia was not the source of WikiLeaks’ release in the lead up to the Nov. 8 presidential election of emails from the Democratic National Committee and Hillary Clinton’s campaign chairman John Podesta.

“Our publications had wide uptake by the American people, they’re all true,” Assange said. “But that’s not the allegation that’s being presented by the Obama White House. So, why such a dramatic response?

“Well, the reason is obvious,” he continued. “They’re trying to delegitimize the Trump administration as it goes into the White House. They are trying to say that President-elect Trump is not a legitimate President.”

Assange maintained that it was “impossible to tell” if the leaked emails had an impact on the outcome of the election.

“But if it did,” he added, “the accusation is that the true statements of Hillary Clinton and her campaign manager, John Podesta, and the DNC head Debbie Wasserman Schultz — their true statements is what changed the election.”

U.S. tensions with Russia over alleged hacking have recently ramped up with a move by the Obama administration to expel 35 Russian diplomats from Washington.

WikiLeaks has maintained since the release of the emails that Russia was not the source of the leaks.