Doomsday Clock Moves Ahead: It Is Now Two and a Half Minutes to Midnight 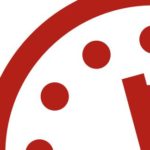 25 Jan 2017 – It is now two and a half minutes to midnight.  For the first time in the 70-year history of the Doomsday Clock, the Bulletin of the Atomic Scientists’ Science and Security Board has moved the hands of the iconic clock 30 seconds closer to midnight. In another first, the Board has decided to act, in part, based on the words of a single person:  Donald Trump, the new President of the United States.

In January 2016, the Doomsday Clock’s minute hand did not change, remaining at three minutes before midnight. The Clock was changed in 2015 from five to three minutes to midnight, the closest it had been since the arms race of the 1980s.

In the statement about the Doomsday Clock, the Bulletin’s Science and Security Board notes: “Over the course of 2016, the global security landscape darkened as the international community failed to come effectively to grips with humanity’s most pressing existential threats, nuclear weapons and climate change … This already-threatening world situation was the backdrop for a rise in strident nationalism worldwide in 2016, including in a US presidential campaign during which the eventual victor, Donald Trump, made disturbing comments about the use and proliferation of nuclear weapons and expressed disbelief in the overwhelming scientific consensus on climate change …The board’s decision to move the clock less than a full minute — something it has never before done — reflects a simple reality: As this statement is issued, Donald Trump has been the US president only a matter of days …”

The statement continues: “Just the same, words matter, and President Trump has had plenty to say over the last year. Both his statements and his actions as President-elect have broken with historical precedent in unsettling ways. He has made ill-considered comments about expanding the US nuclear arsenal. He has shown a troubling propensity to discount or outright reject expert advice related to international security, including the conclusions of intelligence experts. And his nominees to head the Energy Department, and the Environmental Protection Agency dispute the basics of climate science. In short, even though he has just now taken office, the president’s intemperate statements, lack of openness to expert advice, and questionable cabinet nominations have already made a bad international security situation worse.” 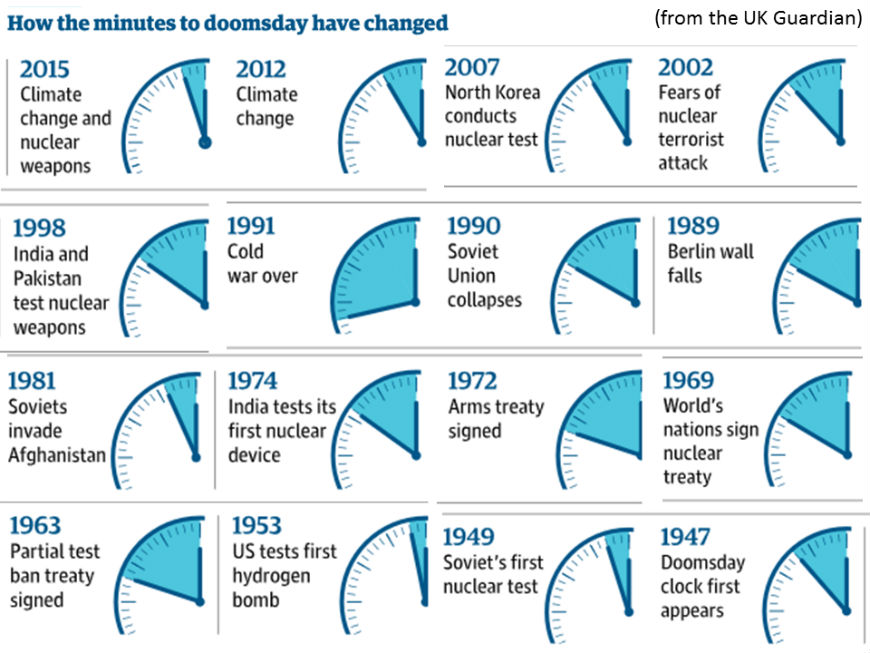 In addition to addressing the statements made by President Trump, the Board also expressed concern about the greater global context of nuclear and climate issues:

“As we marked the 70th anniversary of the Doomsday Clock, this year’s Clock deliberations felt more urgent than usual. In addition to the existential threats posed by nuclear weapons and climate change, new global realities emerged, as trusted sources of information came under attack, fake news was on the rise, and words were used by a President-elect of the United States in cavalier and often reckless ways to address the twin threats of nuclear weapons and climate change.”

“Wise men and women have said that public policy is never made in the absence of politics. But in this unusual political year, we offer a corollary: Good policy takes account of politics but is never made in the absence of expertise. Facts are indeed stubborn things, and they must be taken into account if the future of humanity is to be preserved, long term. Nuclear weapons and climate change are precisely the sort of complex existential threats that cannot be properly managed without access to and reliance on expert knowledge. In 2016, world leaders not only failed to deal adequately with those threats; they actually increased the risk of nuclear war and unchecked climate change through a variety of provocative statements and actions, including careless rhetoric about the use of nuclear weapons and the wanton defiance of scientific evidence. To step further back from the brink will require leaders of vision and restraint.  President Trump and President Putin can choose to act together as statesmen, or as petulant children, risking our future.  We call upon all people to speak out and send a loud message to your leaders so that they do not needlessly threaten your future, and the future of your children.”

“Climate change should not be a partisan issue. The well-established physics of Earth’s carbon cycle is neither liberal nor conservative in character. The planet will continue to warm to ultimately dangerous levels so long as carbon dioxide continues to be pumped into the atmosphere— irrespective of political leadership.  The current political situation in the United States is of particular concern.  The Trump administration needs to state clearly and unequivocally that it accepts climate change, caused by human activity, as reality.  No problem can be solved unless its existence is first recognized. There are no ‘alternative facts’ here”.

The Bulletin of the Atomic Scientists engages science leaders, policy makers, and the interested public on topics of nuclear weapons and disarmament, the changing energy landscape, climate change, and emerging technologies. With smart, vigorous prose, multimedia presentations, and information graphics, the Bulletin puts issues and events into context and provides fact-based debates and assessments. For 70 years, the Bulletin has bridged the technology divide between scientific research, foreign policy and public engagement. See more at: http://thebulletin.org

Founded in 1945 by University of Chicago scientists who had helped develop the first atomic weapons in the Manhattan Project, the Bulletin of the Atomic Scientists created the Doomsday Clock two years later, using the imagery of apocalypse (midnight) and the contemporary idiom of nuclear explosion (countdown to zero) to convey threats to humanity and the planet. The decision to move (or to leave in place) the minute hand of the Doomsday Clock is made every year by the Bulletin’s Science and Security Board in consultation with its Board of Sponsors, which includes 15 Nobel laureates. The Clock has become a universally recognized indicator of the world’s vulnerability to catastrophe from nuclear weapons, climate change, and new technologies emerging in other domains.