Is the Myanmar Government and Military Flirting with ‘Acts of Genocide’ against the Rohingya?

“As a responsible Government, you don’t just go around hollering ‘genocide.’ You say that acts of genocide may have occurred and they need to be investigated.”

12 Jan 2017 – The Rohingya in Myanmar have by all accounts – save for those of the Myanmar government and military – been on the receiving end since at least 2012 of consistent, widespread, presumably organized, and arguably sanctioned acts of violence amounting to crimes against humanity. Take your pick of alleged crimes: persecution, rape, murder, forcible transfer, deportation, extermination, arbitrary detention and imprisonment, and arguably, apartheid.  The full treatment.

Ethnic cleansing with tinges of genocidal acts seems to be the obvious goal, or more ominously put, the desired solution: to expel and, if necessary, eradicate the Rohingya Muslims from the Rakhine state of Myanmar. Meanwhile, the international community and those most expected to speak loudly and repeatedly contently wait, naively or apathetically, for the criminal acts against the Rohingya to dissipate, for their plight to be resolved. Wishful thinking based in part on willful blindness.

Current events show that the Myanmar government and military not only lack the political and moral will to act responsibly, but that they are also comfortable with accepting the commission of purported “acts of genocide” against the Rohingya. Appallingly, the storm of intolerance and indifference that has already stripped the Rohingya of their human dignity, the enjoyment of their inalienable rights, their property, their places of worship, their freedom, and, in far too unacceptable numbers, their lives, is brewing and picking up steam. Time is against the Rohingya.  Time to face the ugly and inconvenient facts.

Before I discuss the ongoing events, a few words about the Rohingya in Myanmar. 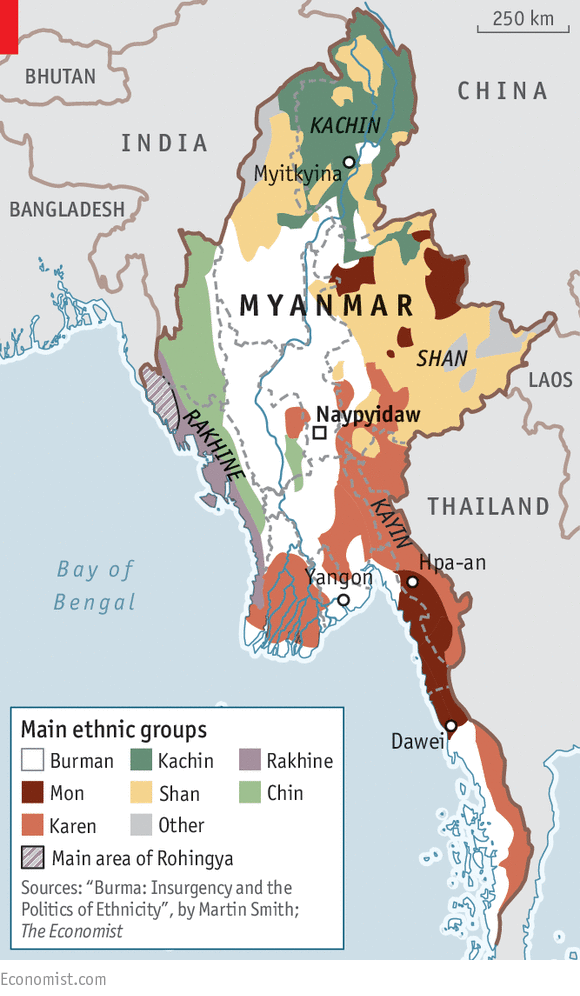 Northern Rakhine state (the name commonly given to the townships of Maungdaw and Buthidaung) is located in the west of Myanmar, bordering Bangladesh. It is populated mainly by the Rohingya, but also by other ethnic minorities such as the Rakhine Buddhist. The Rohingya have faced decades of repression and discrimination. The Myanmar government does not recognize them as one of the ethnic groups of the country. Instead, the Rohingya are regarded as mere refugees from Bangladesh.2 The 1982 Citizenship Law effectively denies the Rohingya the possibility of acquiring Myanmar nationality.3 Being stateless, they lack legal protection by the government, which results in severe restrictions on their movement, impacting their ability to access healthcare, education, and livelihood opportunities.4

In 2012, religious and ethnic tensions between the Rohingya Muslims and the Rakhine Buddhists escalated into widespread rioting. Since then, ongoing conflicts have forced the Rohingya to flee, though they are often rejected (equally unwanted) by neighboring Bangladesh, Malaysia, Indonesia, and Thailand.5

The United Nations (“UN”) Office for the Coordination of Humanitarian Affairs estimates that since early November 2016 almost 27,000 people have fled across the border from northern Rakhine state into Bangladesh.7 Government officials in Myanmar have repeatedly denied reports of human rights violations by security forces. Conversely, journalists and NGOs describe the actions of the state forces in the region as ethnic cleansing and genocide, and have reported murders, mass rape and beatings, burning villages, and other human rights violations amounting to crimes against humanity.8

Shockingly, our Buddhist brothers and sisters in Burma have lost the virtue of Buddhism.9

Most recently, a video surfaced showing officers beating members of the Muslim Rohingya during a security operation. This appears to have gotten the attention of the international community.  The selfie-style video showed the brutality of officers kicking and beating civilians and the impunity they feel. And as the saying goes, the evidence never lies. Finally, the government had to confront what it has known and neglected, if not outright encouraged. The government’s past failures to acknowledge, condemn, and act against this cycle of violence has nurtured a culture of impunity.

In the recent Interim Report of the Investigation Commission on Maungtaw, the Investigation Commission established by the government to investigate the attacks on 9 October 2016 dismissed the allegations of genocide: “[T]he increasing population of Mawlawi, mosques and religious edifices are proof that there were no cases of genocide and religious persecution in the region.”10

Characterizing crimes as genocide is often over the top, hyperbolic. Whenever there are large-scale atrocities, the knee-jerk reaction is to claim that genocide is occurring.  And then there is the reverse action by some governments: best not to come out and claim that genocide is occurring – even when rather obvious – for fear that action (boots on the ground) may need to be taken to halt it. We saw this in the case of Rwanda. Better to punt and claim that only “acts of genocide” are taking place, a policy articulated by the Bill Clinton administration.11  Message to those who were perishing or about to: help will be on its way if the situation intensifies to genocide. Comforting. Years later Clinton would get teary-eyed as he admitted his failure to act in the face of overwhelming evidence of what was happening in Rwanda.12

What are acts of genocide? It is like saying that a woman is a little pregnant. It may make for clever diplomatic speak, but it is just a vacuous phrase. Look beyond the phrase. Where a group (Rohingya Muslims) is being targeted as such, and the intent – as deduced from the actions taken – is at a minimum to maim, permanently expel from Myanmar, and kill them, because of who they are as members of that group (Rohingya Muslims), are there not sufficient hallmarks of genocide (or at the very least traces of extermination) present to merit immediate condemnation and action at the national and international level?13

The Lady speaketh not 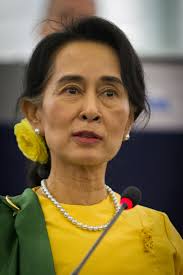 Should not the residents of Myanmar, the Rohingya, and the international community, expect more than her purposeful silence, her occasional drab demur, or her belated request for an international commission?   As the de facto head of state,15 and having promoted herself as the doyenne of human rights activists in Myanmar,16 one would think that she would be front and center in condemning these cruel, inhumane, and, yes, genocidal acts.

Is Aung San Suu Kyi’s position so tenuous that she would suffer politically were she to speak out against this systematic violence against the Rohingya?  Is she afraid of any backlash from the military, the police, and those who support, incite, and carry out the physical acts of violence?  Is she just being pragmatic – as any politician of her position should be?

Aung San Suu Kyi’s deafening silence and lame rationalizations give aid and comfort to the perpetrators.  Some argue that she needs a bit more time and space. Take, for instance, former UN Secretary-General Kofi Annan’s most recent statement.  Selected to the Advisory Commission on Rakhine State, he made the following remarks: “I think there are tensions, there has been fighting, but I wouldn’t put it the way some have done…. [The international community should give Aung San Suu Kyi’s government] a bit of time, space and patience.”17 Tensions?  Is Annan serious?

But is it really a matter of having more time and space, or is it about clinging to and coveting more power? Aung San Suu Kyi may wish to recall and reflect upon her own thoughts on power and the fear of losing it – which seems to be the case with The Lady.

Michael G. Karnavas is an American trained lawyer. He is licensed in Alaska and Massachusetts and is qualified to appear before the various International tribunals, including the International Criminal Court (ICC). Residing and practicing primarily in The Hague, he is recognized as an expert in international criminal defence, including, pre-trial, trial, and appellate advocacy.