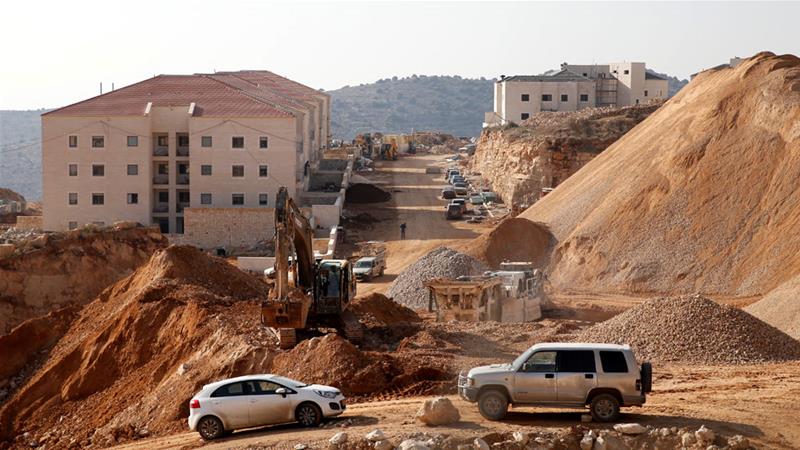 Lieberman said the majority of the new homes will be built in existing settlement blocs. [Reuters]

24 Jan 2017 – Israel has approved a plan to construct 2,500 new settlement homes in the occupied West Bank, two days after the country accepted building permits for more than 500 settler homes in occupied East Jerusalem.

Israeli Defence Minister Avigdor Lieberman said in a statement on Tuesday that he and Prime Minister Benjamin Netanyahu agreed on the approval “in response to housing needs”.

It is the largest recent settlement building plan announced by Israel, which came as the country’s government feels emboldened by US President Donald Trump, who is not critical of illegal settlement activity, as opposed to his predecessor Barack Obama.

Lieberman said the majority of the housing units will be built in existing settlement blocs, areas where most settlers live and which Israel wants to keep under its control under any future peace deal with Palestinian officials.

Palestian officials have condemned Israel’s latest plan for settlements, which are illegal under international law.

A spokesman for Palestinian President Mahmoud Abbas said it deals a new blow to attempts to bring peace to the region and will promote extremism.

Nabil Abu Rdeneh said the decision “disregards” international opposition to the settlements and is calling on the international community to take a “real and serious position” against Israel.

Al Jazeera’s Imran Khan, reporting from East Jerusalem, noted that the Israeli defence ministry’s statement said that 100 of the new settler homes will be built in Beit El, a settlement bloc “that is deep within the Palestinian territory”.

The fresh settlements plan “has already caused a significant amount of anger from the Palestinian Authority, which says it flies in the face of UN resolutions,” he added.

“They also said that it will be the death of the two-state solution.”

According to media reports, the parents of Jared Kushner – who is Donald Trump’s son-in-law and his senior adviser, have contributed a significant amount of funds to the Beit El settlement bloc.

“We build and continue to build,” Netanyahu wrote on Twitter shortly after Lieberman’s announcement on Tuesday.

On Sunday, Israeli authorities approved the construction of 566 settler homes in East Jerusalem.

That announcement came shortly after the inauguration of Trump in the US, with Israeli officials saying the permits had been held up until the end of Obama’s administration.

“We no longer have our hands tied as in the time of Barack Obama. Now we can finally build.”