The Ongoing Genocide in Myanmar

How the international community is failing to protect the Rohingya people. 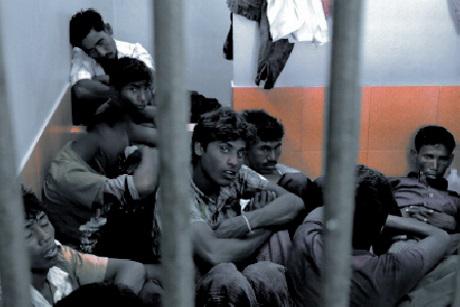 3 Jan 2017 – At this moment, a genocide is happening in Myanmar of which most of the world is unaware.  On 9 October 2016, three border posts were attacked in Western Myanmar by an unknown armed group, killing nine policemen. Following the attack, Myanmar government forces have been conducting a coordinated attack on the civilian population which includes mass killing, rape, torture and the burning of houses and crop fields. Because security forces have locked down the whole area, it is difficult to verify the reports of violence. Utilising independent sources, Voice of America has reported that the death toll could be 150 to 300 so far. Based on satellite imagery, Human Rights Watch (HRW) has observed that 1,250 houses or buildings have been destroyed as of 18 November.

As a result of the military crackdown, thousands of people have been forced to leave their homes; many are attempting to enter neighbouring Bangladesh by crossing the Naaf river. However, the Bangladeshi government has refused to accept more Rohingya, stating that the highly-populated country is already hosting half a million Rohingya who have fled the previous violence.

Within an independent Burma/Myanmar, the Rohingya people have faced widespread persecution in 1978, 1991-92, and 2012. This is in addition to continued discrimination and the denial of basic rights including freedom of movement, the right to livelihood, education, childbirth (the Rohingya are restricted to two children per family), and many aspects of everyday life. As a result, many of the Rohingya have left home and undertaken dangerous journeys in search of safe shelters. There are a significant number of Rohingya people in Bangladesh, Malaysia, Saudi Arabia, Pakistan, India, Thailand, and Indonesia. Some have reached as far as Australia by boat though many died on the journey there. Still, there are 1.1 million Rohingya people left in Myanmar and the government wants to drive them out. A recent study by the Allard K. Lowenstein International Human Rights Clinic at Yale Law School demonstrates that the actions and inactions of the government satisfy the criteria for genocide as defined by the 1948 Convention on the Punishment and Prevention of the Crime of Genocide.

Another study by Human Rights Watch in 2013 found strong evidence of crimes against humanity and ethnic cleansing against the Rohingya committed by the Burmese authority, local Arakanese people, and Buddhist mobs. The report notes an incident on 23 October 2013 where at least 70 Rohingya were killed in a massacre in Yan Thei village in Mrauk-U Township by Arakanese mobs; state security forces indirectly helped in the massacre rather than protecting people. The death toll included 28 children who were hacked to death, including 13 under the age of 5.

Of the five acts of genocide mentioned in the 1948 Convention on Genocide, four have been committed against the Rohingya in Myanmar since 1978.

A research article published in the Pacific Rim Law & Policy Journal in 2014 also concluded that there is a slow burning genocide in the Rakhine State. Of the five acts of genocide mentioned in the 1948 Convention on Genocide, four have been committed against the Rohingya in Myanmar since 1978. The article concludes that: “the ruling Burmese, both the Buddhist society and the Buddhist state, have committed the first four acts, including intentional killing, harm to body and mind of the victims as a group, inflicting on the group conditions of life calculated to bring about its physical destruction in whole or in part, and preventing births.” Researchers from the International State Crime Initiative (ISCI) at Queen Mary University of London School of Law, after months of field work in the Rakhine State last year, also concluded that “Myanmar state’s policies are genocidal.”

It’s clear that there’s an ongoing genocide against the Rohingya people in Myanmar. The state has not only failed in their duty to protect but also occasionally participated in the atrocities. However, that has not stopped powerful states and large corporations boosting business ties with Myanmar. The Myanmar state counsellor and Nobel Peace Prize winner Aung San Suu Kyi has clearly failed to stop the mass destruction of people and take any action against the military forces.

The international community has done little to stop the suffering of the Rohingyas. They have criticised Myanmar for human rights violations and asked for an independent investigation. However, it’s naïve to ask authorities to investigate the very crimes they support or even perpetrate themselves. Once the Rohingya people took arms to solve their problems. However, the post-9/11 ‘war on terror’ has made armed Muslims guerrilla-terrorists in the eyes of global media and western states. In consequence, there is currently no strong movement among the Rohingya people. Myanmar’s neighbours and regional powers, such as China and India, are busy securing the country’s untapped market.

The UN and human rights organisations focus on the humanitarian aspect of the problem: urging the Bangladeshi government to provide shelter to the fleeing Rohingyas. However, these organisations often lack the strong voice needed to deal with the violence in Rakhine state. Myanmar will not heed calls for human rights if such calls aren’t backed by credible hard power. The regional and global players are not sincere enough to engage with Myanmar strongly. Perhaps the only remaining solution lies in the hands of the people, who can put pressure on their governments to take immediate and serious action.

This article is published under a Creative Commons Attribution-NonCommercial 4.0 International licence. If you have any queries about republishing please contact us. Please check individual images for licensing details.

Ashraful Azad is an assistant professor in the Department of International Relations, University of Chittagong, Bangladesh.