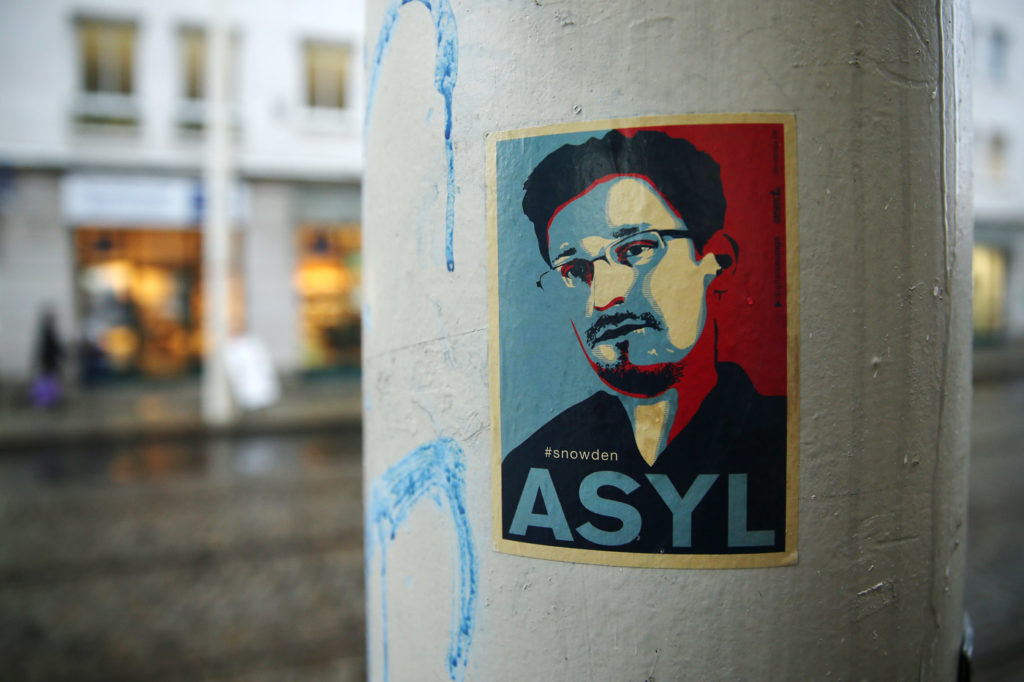 10 Jan 2017 – Like most people, I’ve long known that factual falsehoods are routinely published in major media outlets. But as I’ve pointed out before, nothing makes you internalize just how often it really happens, how completely their editorial standards so often fail, like being personally involved in a story that receives substantial media coverage. I cannot count how many times I’ve read or heard claims from major media outlets about the Snowden story that I knew, from firsthand knowledge, were a total fabrication.

We have a perfect example of how this happens from the New York Times today, in a book review by Nicholas Lemann, the Pulitzer-Moore professor of journalism at Columbia University as well as a longtime staff writer for the New Yorker. Lemann is reviewing a new book by Edward J. Epstein — the longtime neocon, right-wing Cold Warrior, WSJ op-ed page writer, and Breitbart contributor — which basically claims Snowden is a Russian spy.

The book has been widely discredited even before its release as it is filled with demonstrable lies. The usually rhetorically restrained Bart Gellman, whose work on the Snowden story at the Washington Post won the 2014 Pulitzer Prize for Public Service, called the book “bad faith work” that is filled with “distortions” and “baseless and bizarro claims,” several of which he documented. I’ve documented some of the other obvious falsehoods in the book.

Suffice to say, so fringe is Epstein’s conspiracy claim that even top NSA and CIA officials — who despise Snowden and have repeatedly attempted to disparage him — have rejected the book’s central conspiracy theory that Snowden has worked with the Kremlin. In 2014, Epstein, citing what he claimed a government official told him “off the record,” wrote my favorite sentence about this whole affair, one that I often quoted in my speeches to great audience laughter: “There are only three possible explanations for the Snowden heist: 1) It was a Russian espionage operation; 2) It was a Chinese espionage operation; or 3) It was a joint Sino-Russian operation.” He’s apparently now opted for Door No. 1.

Lemann himself is highly dismissive of the book’s central accusations about Snowden and does a perfectly fine job of explaining how the book provides no convincing evidence for its key conspiracies:

Epstein proves none of this. “How America Lost Its Secrets” is an impressively fluffy and golden-brown wobbly soufflé of speculation, full of anonymous sourcing and suppositional language like “it seems plausible to believe” or “it doesn’t take a great stretch of the imagination to conclude.”

Lemann’s review is worth reading to see what a farce this book is, and especially — for all those authoritarian liberal New Cold Warriors tempted to embrace the book because it smears Snowden as a Russian operative — to understand who Epstein is and the ideological agenda to which he’s long been devoted.

Nonetheless, there is one statement in Lemann’s review that is misleading in the extreme and another that is so blatantly, factually false that it’s mind-boggling it got approved by a NYT editor and, presumably, a fact-checker. But it is worth looking at because it illustrates how easily this happens. Here’s the first one:

Snowden, Julian Assange of WikiLeaks, and their immediate circle of allies come from a radically libertarian hacker culture that, most of the time, doesn’t believe there should be an NSA at all, whether or not it remains within the confines of its legal charter.

Though ambiguous about who exactly it is describing, this passages strongly implies that Snowden “doesn’t believe there should be an NSA at all.” Snowden believes nothing of the kind. In fact, he believes exactly the opposite: that the NSA performs a vital function and many of its programs are legitimate and important. He has said this over and over. That’s why he wanted to work for the agency. It’s why he refused to dump all the documents he took and instead gave them to journalists, demanding that they only publish those that exposed information necessary to inform the public debate: precisely because he did not want to destroy NSA programs he believes are justifiable.

It’s unclear who Lemann means by Snowden’s “immediate circle of allies,” but I personally have never heard anyone who qualifies as such express the cartoon view Lemann has manufactured here. What I’ve heard from both Snowden and his “immediate circle of allies” has been quite consistent: that — as is true of all countries — it is legitimate for NSA to engage in targeted surveillance (i.e., monitoring specific individuals whom a court, based on evidence, concludes are legitimate targets) but inherently illegitimate to engage in suspicion-less mass surveillance (i.e., subjecting entire populations to monitoring). Everything Snowden has said and done is the antithesis of this absolutist abolish-the-NSA view Lemann concocted (indeed, Snowden has been harshly criticized by actual radicals for being too protective and supportive of NSA’s functions, as have the journalists who worked with him for refusing to dump the whole archive).

But while that passage from Lemann is misleading, his final paragraph is outright false as a clear factual matter:

This time around, [Epstein’s] concern seems to be half with the celebratory closed loop between Snowden and the journalists who covered him, and half with the causes and consequences of a major security breach at the NSA. The heart of the matter is the second of these concerns, not the first. In the Snowden affair, the press didn’t decide what stayed secret, and neither did Congress, the White House or the NSA. Snowden did.

This is the exact opposite of the truth. It is a fundamentally false description of what happened. Most amazingly, the New York Times knows firsthand that this claim it just published is false because of its direct involvement in reporting the Snowden archive.

Not a single document that saw the light of day was published because Snowden decided it should be: literally not one. Snowden played no decision-making role whatsoever in determining which documents were published and which were withheld. What happened was exactly the opposite of what Lemann told New York Times readers: It was the press, not Snowden, that decided what stayed secret and what was reported.

After giving the journalists with whom he worked the documents and asking them to withhold those that could harm innocent people or destroy legitimate programs, Snowden lost all ability to control what was and was not published. As is true of most leaks — from the routine to the spectacular — those publishing decisions rested solely in the hands of the media outlets and their teams of reporters, editors, and lawyers. Every Snowden document ever published was published by a media outlet with teams of professionals, which means that not one Snowden document was ever published without multiple reporters, editors, and lawyers jointly deciding that the public interest was served by its publication.

The New York Times knows firsthand that Lemann’s claim is false because that paper possessed a large portion of the Snowden archive and published all of its stories without ever obtaining Snowden’s permission. Indeed, Snowden at times vehemently disagreed with the decisions made by the NYT and other outlets to publish certain material.

As Snowden told Time: “There have of course been some stories where my calculation of what is not public interest differs from that of reporters, but it is for this precise reason that publication decisions were entrusted to journalists and their editors.” As the ACLU’s Ben Wizner, who represents Snowden, explained: “He didn’t want and didn’t think that he should have the responsibility to decide which of these documents should be public.” Anyone who has even casually followed this story knows this was the journalist-driven process that determined which documents got published.

Ironically, the most controversial Snowden stories — the type his critics cite as the ones that should not have been published because they exposed sensitive national security secrets — were often the ones the NYT itself decided to publish, such as its very controversial exposé on how NSA spied on China’s Huawei. It was the NYT’s David Sanger and Nicole Perlroth and their editors — not Snowden — who decided that this program should be exposed. That same dynamic drove every story based on Snowden documents.

Even if one wants to argue that Snowden bears some moral responsibility for exposure of this program by virtue of having made these documents available to news outlets, it is undeniably true — to reverse Lemann’s formulation — that Snowden didn’t decide what stayed secret. The press did. As the ACLU’s Wizner put it simply about Lemann’s review: “The last lines are just false.”

(One great irony highlights this dynamic: In September, Perlroth — after exploiting Snowden’s leaks for her own benefit — argued that her own source should not be pardoned on the ground that he leaked documents “that had nothing to do with privacy violations.” But it was she, Nicole Perlroth — not Snowden — who decided to expose, on the front page of the NYT, the NSA’s spying activities on Huawei.)

How can the New York Times allow Lemann to make such a blatantly false claim about how this reporting took place and who made the decisions about what should and should not be secret? One of the great benefits of new media — of online reporting — is that one can provide proof of one’s claims in the form of links (as I’ve done here), so that readers can determine if journalistic claims have evidentiary support. That is such a vital exercise because, as Lemann and the NYT just demonstrated, it is so often the case that the most influential media outlets publish factually false statements using the most authoritative tones. This episode illustrates yet again why everyone is well-advised not to believe assertions from any authority or institution that are unaccompanied by evidence you can see and evaluate for yourself.

As is true of many enduring news stories, there are several zombie myths associated with the Snowden story that will never die no matter how often they are debunked. Perhaps the most annoyingly persistent is that Snowden said at the start that he was only exposing privacy violations on Americans, so that one can prove he’s a liar by demonstrating that he also leaked documents pertaining to spying on foreigners.

But Snowden never said anything like that. From the beginning, he always said the exact opposite: that he greatly values the privacy rights of Americans but also values the privacy rights of the 95 percent of the world’s population called “non-Americans.” As Snowden said in his first online interview with readers that I conducted back in June 2013: “Suspicionless surveillance does not become OK simply because it’s only victimizing 95 percent of the world instead of 100 percent.” That Snowden said he only wanted to expose privacy violations on Americans is just one of those falsehoods that no matter how many times you disprove it, commentators for some reason feel perfectly entitled to keep repeating it.