The report’s conclusions are not based on primary sources, material evidence or their own staff; they are solely based on the claims of anonymous individuals. 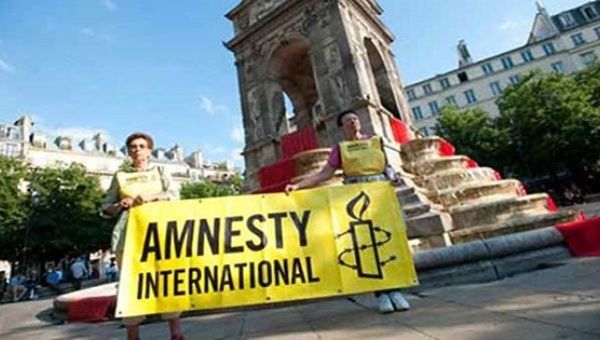 12 Feb 2017 – Amnesty International has done some good investigations and reports over the years. This has won them widespread support. However, less known, Amnesty International has also carried out faulty investigations contributing to bloody and disastrous actions. One prominent example is in Iraq, where AI “corroborated” the false story that Iraqi soldiers were stealing incubators from Kuwait, leaving babies to die on the cold floor.

RELATED: Under Trump US Kills More Civilians in Syria, Iraq than Russia

The deception was planned and carried out in Washington, D.C. to influence the public and congress. A more recent example is from 2011, where false accusations were being made about Libya and its leader as Western and Gulf powers sought to overthrow the Muammar Gaddafi government. AI leaders joined the campaign claiming that Gaddafi was using “mercenaries” to threaten and kill peacefully protesting civilians. The propaganda was successful in muting criticism. Going far beyond a U.N. Security Council resolution to “protect civilians,” NATO launched sustained air attacks and toppled the Libyan government leading to chaos, violence and a flood of refugees. AI later refuted the “mercenary” accusations but the damage was done.

Like the Iraq/Kuwait incubator story and the Libyan “mercenary” story, the “human slaughterhouse” report is coming at a critical time. The consequences of the AI report are to accuse and convict the Syrian government of horrible atrocities against civilians. AI explicitly calls for the international community to take “action.”

The co-author of this AI report is Nicolette Waldman (Boehland). She was uncritically interviewed on DemocracyNow! on Feb. 9. The background and previous work of Waldman show the interconnections between influential Washington “think tanks” and the billionaire foundation backed NGOs that claim to be independent but are clearly not.

A look at the report in detail shows it is biased and partial.

Problems with the Report

RELATED: Pentagon Failed to Disclose up to Thousands of Air Strikes

Essential facts which are completely missing from the Amnesty report include: western powers and Gulf monarchies have put up billions of dollars annually since 2011 to fund, train, weaponize, provide salaries and propaganda in support of a violent campaign to overthrow the Syrian government; tens of thousands of foreign fanatics have invaded Syria; tens of thousands of Syrians have been radicalized and paid by Wahabi monarchies in the Gulf to overthrow the government; and over 100 thousand Syrian army and national defense soldiers have been killed defending their country. Most of this is public information yet ignored by AI and other media in the West. They have done a massive distortion and cover-up of reality.

Amnesty International has previously published false information or “corroboration” which justified Western aggression against Iraq and Libya. This seems to be the same role they are playing now in Syria.

The AI report is a combination of accusations based on hearsay and sensationalism. Partially because of Amnesty’s undeserved reputation for independence and accuracy, the report has been picked up and broadcast widely. Liberal and supposedly progressive media outlets have dutifully echoed the dubious accusations. In reality, this report amounts to a kangaroo court with the victim being the Syrian government and its people who have borne the brunt of the foreign-sponsored aggression. If this report sparks an escalation of the conflict, which AI seems to call for, it will be a big step backward not forward … just like in Iraq and Libya.

Rick Sterling is an investigative journalist based in the San Francisco Bay Area in the U.S.A.