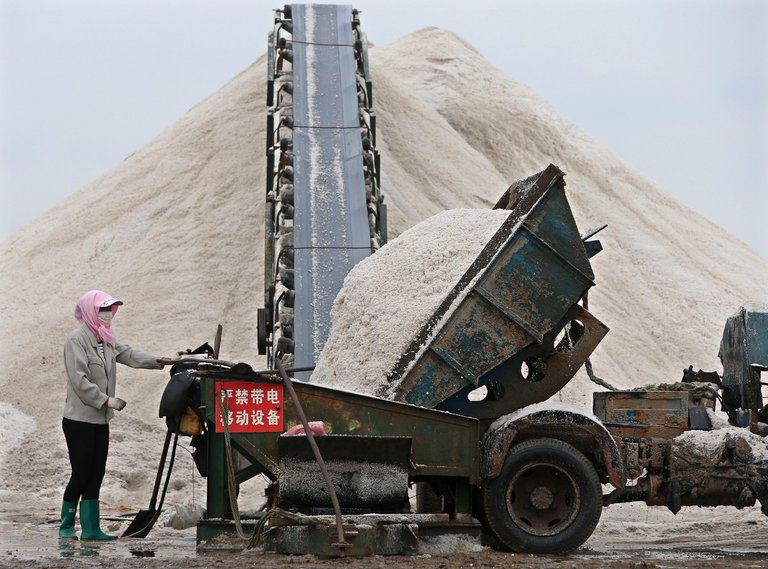 A salt farm in Shouguang, China. Despite the dismantling of the more than 2,000-year-old state monopoly on salt, all Chinese salt producers are still state-owned.
Credit Wu Hong/European Pressphoto Agency

In December, 15 years after China’s accession to the World Trade Organization, the European Union, the United States and Japan formally refused to grant Beijing the coveted label, denying it important concessions on tariffs and other trade restrictions.

This is partly a response to economic distortions caused by government intervention, including an excess supply of steel, which China exports and dumps in advanced industrialized countries, harming local producers and workers. China’s many high-profile moves to open up its markets in recent years turn out to have been half-hearted, if not intentional hoodwinking.

Despite the much-ballyhooed dismantling of the more than 2,000-year-old state monopoly on salt, all salt producers are still state-owned. Foreign asset-management companies are now allowed to operate wholly foreign-owned businesses in China, but only in deals with institutional investors and private-equity funds, not retail investors, a much bigger piece of meat. Partly to steady the renminbi, Beijing no longer allows Chinese citizens to take up to $50,000 a year out of the country, and it has recently restricted the repatriation of capital by foreign firms like Deutsche Bank.

Hyper control, interventionism, currency manipulation — no, China is not a market economy. But it’s worse than that: The Chinese Communist Party (C.C.P.) has systematically infiltrated China’s expanding private sector and now operates inside more than half of all nonstate firms; it can manipulate or even control these companies, especially bigger ones, and some foreign ones, too. The modern Chinese economy is a party-corporate conglomerate.

It all began in 1927. After the communists’ fledging armed forces suffered serious losses against the Kuomintang government, Mao Zedong and his associates decided to create a hierarchy within the military that would mirror the structure of the party. The idea was to instill a fighting spirit throughout the ranks by ensuring the party’s top commands would be relayed all the way down. Party branches (黨委) were set up at the company level, party cells (黨小組) at the platoon and squad levels, and together they recruited foot soldiers who were solid party material. In just a few years, an unruly peasant army was whipped into a formidable fighting force. The rest is history.

Fast-forward to 2002 and the C.C.P.’s 16th national congress, convened under Jiang Zemin. In the interval, China underwent two revolutions. The first, in 1949, established a communist state; the second, in 1978, jettisoned a stagnant socialist planned economy in favor of pro-market reforms. By 2002, China was competing with France to be the world’s fifth-largest economy, and the Chinese people’s entrepreneurial spirit had been reawakened. Much of the political elite, including relatives of party and government officials, had become the owners and managers of private businesses.

To legitimize the growing importance of these so-called new social strata (新興社會階層), the party congress inducted many of their influential members into the C.C.P. The move would have been heresy under canonical Marxism, but it was made acceptable by the convenient adoption of a new ideology: socialism with Chinese characteristics. It was also an astute bargain. In return for becoming politically acceptable, capitalists and top business managers at private firms would come under the party’s chain of command.

The year before the party started controlling the managerial classes, it had already begun to manipulate how private companies ran their businesses. Starting in 2001, every private-sector firm with at least three C.C.P. members among its employees was required to have a party unit. Much like the party cells in the Red Army decades earlier, party units in companies were expected to “firmly implement the Party’s line, principles and policies,” as the Constitution of the C.C.P. stipulates.

This control mechanism had been a fixture of state-owned enterprises since the first days of the communist republic. It was brought into the private sector in earnest in 2001 — just on the heels of China’s accession to the W.T.O. — and extended after the 2002 party congress. Around 2006, it was introduced to private firms set up with foreign capital, like Walmart.

Official figures for 2015 show that nearly 52 percent of all nonstate firms had party cells in-house. Such cells are now also common in foreign companies, and even foreign NGOs, at least among bigger, more established ones.

Consider the implications. For example: A foreign firm employs a Chinese senior manager, giving him access to its proprietary technology; he is also a member of the C.C.P. and the firm’s party unit. One day his party superior orders him to transfer a trade secret from the firm to a local rival. In the name of party and country, he can only comply.

In other words, the problem isn’t just that the Chinese economy isn’t a market economy in that the government won’t let it operate freely enough. Its very structure, including in the private sector, has been designed — and is redesigned, again and again — to serve the C.C.P.’s will and its interests, economic and political. This party-corporate complex is only going to expand as most state-owned enterprises, inefficient holdovers from the old economy, are being supplanted by the fast-growing private sector.

Chongcao (蟲草), literally worm-grass, is an expensive Chinese herbal medicine said to treat lung and kidney conditions, and erectile dysfunction. It comes from a curious creature. At the beginning of winter the larvae of a certain moth are attacked and impregnated by a kind of micro-fungus. Come summer, they still look like animal larvae, but have become plant colonies. In the last 15 years or so, the C.C.P. has colonized China’s private-sector companies in much the same way: They may still seem like conventional firms, but really they are the party’s potent spawn.

Yi-Zheng Lian is a commentator on Hong Kong and Asian affairs.