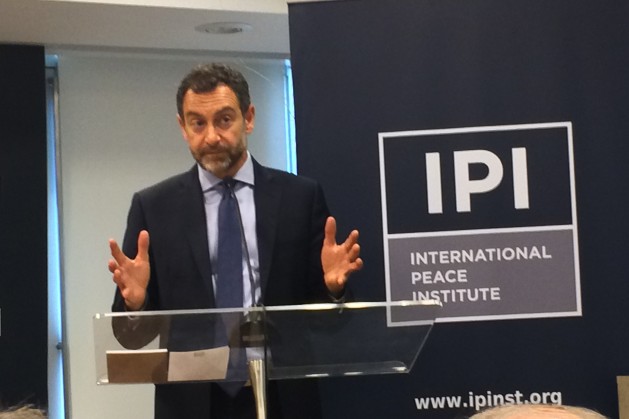 30 Jan 2017 – Children less than five years of age are not surviving due to severe food shortages in some parts of the Lake Chad region, says Toby Lanzer, UN Assistant Secretary-General and Regional Humanitarian Coordinator for the Sahel.

“I saw adults sapped of energy who couldn’t stand up, I saw an entire town devoid of two-year olds, three-year olds, four-year olds, and when we asked where the children are – and I get upset when I say this – we were told that they had died, they had starved.”

This was the situation Lanzer saw on a visit to the town of Bama in Northern Nigeria in 2016. He described the visit at a discussion with policy makers, diplomats and journalists at the International Peace Institute – a New York think tank – on Wednesday 25 January.

The crisis has left millions of people living on the edge in the Lake Chad basin, due to a combination of abject poverty, climate change and violent extremism, said Lanzer. Four countries – Chad, Cameroon, Niger, and Nigeria – border Lake Chad, which has shrunk dramatically since the 1960s.

“Around Lake Chad there are now well over 10 million people who I could categorise as desperately in need of … life-saving aid,” he said, including 7.1 million people categorised as “severely food insecure.”

In response to a question from IPS, Lanzer described how ongoing violence in the region has contributed to the food shortages:

“About 85 percent of people across this part of the world depend on the weather and agriculture livestock – it’s an agro-pastoralist community.”

“If your cattle or your goats or your livestock isn’t moving cows that don’t walk get sick and they die and then you’ve lost your livelihood,” he added.

Lanzer, whose humanitarian career has seen him work in Sudan, South Sudan, Timor-Leste, and the Central African Republic said that the poverty in the Lake Chad region is some of the worst he has witnessed.

However Lanzer noted that ongoing violence in the region – including due to extremist group Boko Haram – was one of the biggest factors disrupting the lives of people in the region.

Els Debuf, Senior Adviser and Head of Humanitarian Affairs at the International Peace Institute said that although the crisis in the Lake Chad region is one of the most severe it is also one of the most under-reported.

She noted that despite the region’s extreme poverty, communities were also sheltering refugees and internally displaced persons:

“Close to two and half million refugees and internally displaced people – the vast majority of whom are children – are sheltered throughout the region by communities who are themselves among the poorest and most vulnerable in the world,” she said.

The governments of Norway, Nigeria and Germany are planning a pledging conference to raise funds for the crisis in Nigeria and the Lake Chad region on 24 February in Oslo, Norway.