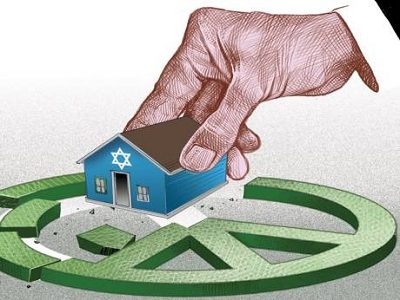 7 Feb 2017 – Within days of US President Donald Trump being sworn in, the Israeli government announced the approval of around 2,500 new housing units.

Within the first two weeks of Trump’s presidency, the number of new housing units, all to be built illegally on Palestinian land, was raised to 5,500, including the first brand-new government-sanctioned colony in years.

In response, Israeli Prime Minister Benjamin Netanyahu tweeted: “We are building — and we will continue to build” — a statement which clearly expresses Israel’s blatant disregard for and violation of international law. What is clear is Israel’s determination to continue its ravenous expansion of illegal colonies, which is unprecedented in at least eight years.

It is true that the colony-building activities accelerated after the signing of the so-called Oslo Peace Accord, but in recent years Israel realised that every decision to approve constructing more units in illegal colonies came at the price of international criticism and condemnation.

Now that Trump is in power, Israel, controlled by right-wing, ultra-nationalist and religious zealots is rapidly moving to further ratify a new, irreversible political reality.

The current political atmosphere regarding colony expansion in Israel rings back to when the late Ariel Sharon was the country’s foreign minister. Fearing that Israel would come under international pressure to halt illegal colony construction, he called on Jewish colony extremists to steal as much Palestinian land as possible.

“Everybody has to move, run and grab as many [Palestinian] hilltops as they can to enlarge the [Jewish] settlements [colonies] because everything we take now will stay ours,” Sharon said in comments that were broadcast in Israeli radio in November 1998. “Everything we don’t grab will go to them.”

Sharon is dead, but his crazed mentality is clearly alive and at the helm of Israeli politics after a period in which colony growth had relatively slowed down.

According to a recent United Nations report, illegal colony numbers tell of a tragic reality, numbering 196 in the occupied West Bank and occupied Jerusalem, in addition to 232 outposts, which the current Israeli government plans to annex as well.

The total number of Jewish colonists now stands at 750,000, nearly three times the number of colonists in 1992 (shortly before the Oslo Accord was signed).

These numbers have all accompanied the continuous ethnic cleansing of Palestinians from their land and homes, and the revocation of residency permits for Palestinians in the occupied Jerusalem area.

According to the UN report, 250,000 Palestinians have been exiled from the occupied territories since the war of 1967. (This number does not include those who were ethnically cleansed during the war itself)

Thus, the recently announced massive expansion of Jewish colonies will have not only considerable political consequences, but humanitarian ones as well.

Israel’s hankering after more land has been a persistent motive, but the advent of the Trump presidency has given the Israeli right the needed confidence to move forward with its plans, unhinged.

Throughout his campaign for the White House, Trump made numerous, blatant and often contradictory promises. While he initially pledged to keep a similar distance between Palestinians and Israel, he later reversed his position, adopting that of Israel’s right-wing government.

Trump, the opportunistic real-estate mogul entered the White House with an eerie agenda that mimics that of the current Israeli right-wing, ultra-nationalist government.

“We have now reached the point where envoys from one country to the other could almost switch places,” wrote Palestinian Professor Rashid Khalidi in the New Yorker.

Israel is almost in a state of political euphoria — not only are the superfluous references to a ‘peace process’ and a Palestinian state over, but they now have a free hand to build illegal Jewish colonies in occupied Jerusalem, unhindered. New bills are springing in the Israeli Knesset to annex even the Jewish colonies rendered illegal by Israel’s own definitions, and to remove any restriction on new colony construction and expansion.

Of course, Trump’s administration has no qualms with that; in fact, this falls perfectly within the agenda of the new rulers of the United States who now control the legislative and executive branches.

The Trump administration has actually gone further, pledging to move its embassy from Tel Aviv to occupied Jerusalem, again in complete disregard for international law. Friedman was elected for that post precisely to administer that decision, the dangers of which the inexperienced, demagogic politician, Trump, seems to overlook.

If Trump persists in this decision, he is likely to unleash an episode of chaos in an already volatile region. The move which is now reportedly in the ‘beginning stages’, is not merely symbolic, as some have naively reported in western mainstream media.

True, American foreign policy has been centred mostly on military power, and rarely on historical fact. But Trump, known for his thoughtlessness and impulsive nature, is threatening to eradicate even the little (although vague) common sense that governed US foreign policy conduct in the Middle East, and is likely to regret the unanticipated consequences of his action.

Countries around the world, even those considered allies of Israel such as the United States, reject Israeli sovereignty over Jerusalem and the Israeli invitation to relocate their embassies.

While some in mainstream western media are already predicting “a fresh wave of Palestinian violence” should the relocation occur, the new US administration must think carefully before embarking on such a self-destructive move.

In a recent interview with ‘Fox News’, Trump restated the tired jargon of how ‘badly’ Israel has been treated and that relations between Washington and Tel Aviv have been ‘repaired.’ However, he then refused to talk about moving the embassy because “it’s too early.”

Perhaps Trump was side-stepping to avert a crisis. Yet, that was a downgraded position from that of his senior adviser, Kellyanne Conway, who had recently stated that moving the embassy is a “very big priority.”

Even if the embassy move is delayed, the danger still remains, as Jewish colonies are now growing exponentially, thus compromising the status of the city.

The fact is that Trump’s lack of clear foreign policy that aims at creating stability — not rash decisions to win lobby approval — is a dangerous political strategy.

Trump’s intention to reverse the legacy of his predecessor, should not mean that he should begin his legacy by inviting more violence and pushing an already volatile region further into the abyss.