After having died, George Bush, Barack Obama and Donald Trump show up for an interview with God.

God asks Bush: What do you believe? Bush responds: I believe in a free economy, a strong America, a united American nation and so on …

God is impressed by Bush’s answer and says: Bravo, come and sit down on the chair to my right!

God speaks to Obama and asks him: What do you believe? Obama responds: I believe in democracy, in helping the poor, world peace and so on …

God is really impressed by Obama’s answer and says: Bravo, come and sit down on the seat to my left!

Finally, God asks Trump: What do you believe? And Trump responds: I believe you are sitting in my chair! 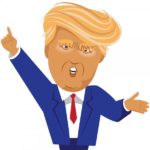 Anticopyright: Editorials and articles originated on TMS may be freely reprinted, disseminated, translated and used as background material, provided an acknowledgement and link to the source, TMS: Meanwhile in Heaven…, is included. Thank you.