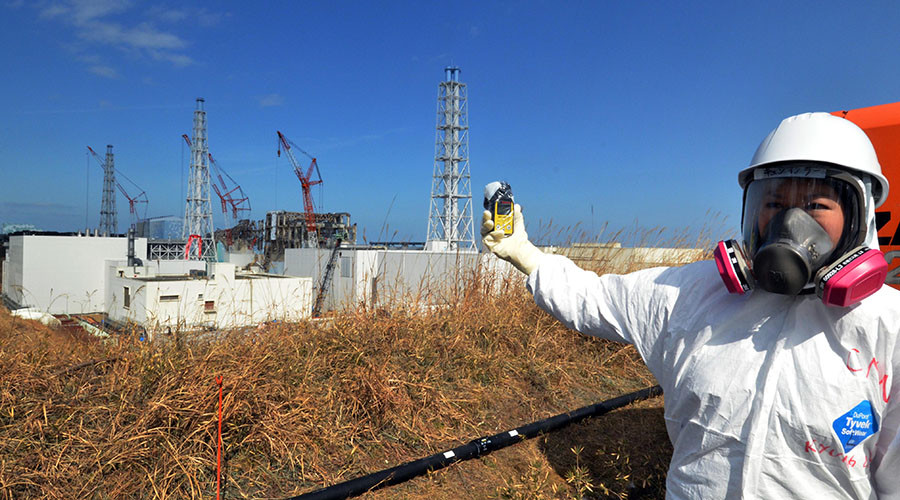 3 Feb 2017 – Record high radiation levels that are lethal even after brief exposure have been detected at a damaged reactor at the Fukushima power plant in Japan. Specialists also found a hole, likely caused by melted nuclear fuel.

Radiation levels of up to 530 Sieverts per hour were detected inside an inactive Reactor 2 at the Fukushima Daiichi nuclear complex damaged during the 2011 earthquake and tsunami catastrophe, Japanese media reported on Thursday citing the plant operator, Tokyo Electric Power Company (TEPCO).

A dose of about 8 Sieverts is considered incurable and fatal.

A hole of no less than one square meter in size has also been discovered beneath the reactor’s pressure vessel, TEPCO said. According to researchers, the apparent opening in the metal grating of one of three reactors that had melted down in 2011, is believed to be have been caused by melted nuclear fuel that fell through the vessel.

The iron scaffolding has a melting point of 1500 degrees, TEPCO said, explaining that there is a possibility the fuel debris has fallen onto it and burnt the hole. Such fuel debris have been discovered on equipment at the bottom of the pressure vessel just above the hole, it added.

The latest findings were released after a recent camera probe inside the reactor, TEPCO said. Using a remote-controlled camera fitted on a long pipe, scientists managed to get images of hard-to-reach places where residual nuclear material remained. The substance there is so toxic that even specially-made robots designed to probe the underwater depths beneath the power plant have previously crumbled and shut down.

However, TEPCO still plans to launch further more detailed assessments at the damaged nuclear facility with the help of self-propelled robots.

Speaking to RT, Yosuke Yamashiki, Doctor of Engineering from Kyoto University said the located leaking is “a great discovery.”

“This is a kind of progress,” Yamashiki said.

“There is a very small hole… and very small amount of the radiation is still leaking from the reactor. It’s not the fatal level but it is going on.”

“However, they haven’t established a proper means of how to decompose the meltdown reactor yet. There not so many ways to decompose it,” the expert noted, adding that he and his colleagues are providing a special technique using ice which, however, has not been approved yet.

Yamashiki warned that the complete reduction of the radiation will take hundreds of thousands of years.

However, looking on the bright side, he said, “right now, the radiation level is much lower since the reactor hasn’t been active for a while.”

Earlier this week, hopes for a more efficient cleanup at Fukushima were high, as the plant operator announced a portion of nuclear fuel debris responsible for a lot of the lingering contamination from six years ago may have finally been found.