Regional Actors Should Take a Stand against Myanmar

India and other South Asian nations should be unambiguous in their condemnation of Myanmar’s treatment of the Rohingya. 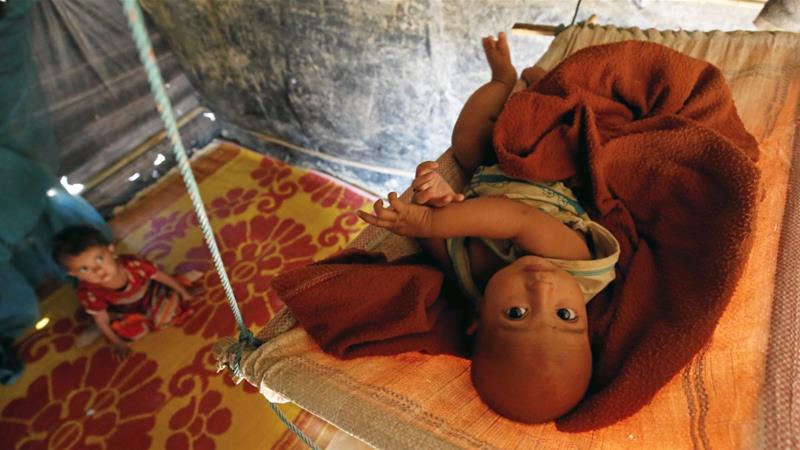 If it continues to espouse any formal commitment to democracy and pluralism, India cannot remain silent on what is happening in West Myanmar.
[Mohammad Ponir Hossain/Reuters]

15 Feb 2017 – Even by the standards of a region that has seen more than its fair share of xenophobic violence, forced migrations and displacements, the grim plight of the Rohingya of Myanmar stands out as an abomination of the worst sort.

Here are a people who have lived for generations on what are now the borderlands of Myanmar and Bangladesh, both of which, in their present national forms, are relatively recent historical creations.

The Rohingya have been hounded out of the former, rendered non-citizens through legal machinations and treated poorly by the latter, which either tries to “push them back” or corrals them into ramshackle camps with poor accommodation, hygiene and little access to healthcare or education for children.

There are now resurrected plans, denounced by Human Rights Watch as “cruel and unworkable“, to relocate them to Thengar Char, an undeveloped coastal island that floods regularly.

The Rohingya, whose very existence has been denied by the Myanmar state, have also sought – and been refused – shelter in Southeast Asian countries, after risking dangerous journeys on the high seas, which many did not survive.

Some of the leaders of these nations rightly identify Islamophobia as a contributing factor to the Rohingya’s misery, but are less eager to offer refuge. Only a small number have been accommodated in India.

A United Nations report, which came out earlier this month, offers a scathing indictment of all concerned, noting, perhaps with a touch of understatement, the “devastating cruelty” to which the Rohingya people, children in particular, have been subjected (PDF).

Whole areas of Rohingya habitation have been burned to the ground, while women have been gang-raped by Myanmar’s security forces as well as Rakhine civilian vigilantes.

The Rohingya have been subjected to regular massacres, including of their babies. Their mobility has been severely restricted and severe malnourishment is rife.

They have also been subjected to draconian marriage and childbearing regulations intended to curb their numbers. The word “persecution” is wholly inadequate to describing a population which is clearly being targeted for systematic elimination from the body politic of Myanmar.

While Desmond Tutu has already called the situation a “slow genocide”, and the Simon-Skjodt Centre for Prevention of Genocide has raised the alarm, noting carefully that “many preconditions for genocide are already in place”, big global actors have steadfastly refused to use the term, which would then trigger the international Convention on the Punishment and Prevention of the Crime of Genocide.

It is fair to say that a world, which was riveted by the spectacle of a beautiful woman under long years of house arrest in that country, has chosen to discreetly avert its eyes from the ongoing systematic persecution, and, barring a few retaliatory actions, one-sided bloodshed.

Meanwhile, Aung San Suu Kyi herself, who is now Myanmar’s elected civilian leader, has either remained silent on the worsening situation or – scandalously and unforgivably – participated in official denials issued from the military, charging critics with focusing on the “negative side”.

We rightly denounce those who deny past genocides, yet surely those in a position to observe and act but still deny the fact of ongoing ethnic cleansing accompanied by stigmatisation and dehumanising laws are even more culpable?

No religion, of course, would admit to violence being sanctioned in its scriptures but there is something especially depraved about Buddhist monks inciting violence, manifestly violating the Buddha’s unambiguous repudiation of hatred as a form of relating to others.

Ashin Wirathu, the rabid hate preacher who has repeatedly incited attacks on the Rohingya, can plausibly be listed as one of the world’s great terrorists.

What of the land of the Buddha’s birth? India, the major South Asian player, critical of Myanmar’s military junta in the past, now chooses to undertake a “pragmatic engagement” with it, which includes selling military hardware.

India certainly has one eye on Myanmar’s considerable oil and natural gas reserves as well as its expanding market, but its softly-softly approach in the face of impending genocide is heavily tied up with the fear of the increasing influence in the region of China, not a nation known for an interest in human rights.

The two countries are involved in a race for resources and markets while the Indian state seeks bulwarks against China’s militarisation of the Indian Ocean. There is reason to fear what may turn out to be a competitive regional and global silence on the fate of the Rohingya.

India has suggested that the matter is an “internal affair” for Myanmar, the stock phrase that has enabled it to refuse international scrutiny of some of its own more questionable policies.

Setting aside the question of whether anything can be strictly an “internal” affair in these global times, there is one important historical strand that India should not ignore: the stigmatisation and rejection of the Rohingya and the attempts to push them westwards into the Indian subcontinent draws on anti-Indian racism – a long-standing hatred and sanctioned racism against those perceived to be of Indian descent, disliked for being favoured by the British colonial rulers. Vilified in explicitly racist terms as “dark-skinned” Bengalis, the Rohingya are falsely described as post-Independence migrants from East Bengal who should be returned there.

Of course, the stark fact is that the Rohingya – a term that Myanmar refuses to use as part of denying them legitimacy – are explicitly persecuted as a Muslim minority. For the current Indian regime, with its heavily Hindu support base, there is little to gain by coming to the vocal defence of adherents of Islam.

This is in obvious contrast to its vocal calls for protection for Hindu minorities targeted by Islamists and majoritarians in Bangladesh, and the manifestly politicised moves to offer Indian citizenship to Pakistani minorities.

However, now that the danger of the Islamic State of Iraq and the Levant (ISIL) group preying on the situation to establish a base in South Asia has been raised, there are stirrings in the Indian media, with editorials calling for more attention to be paid to the Rohingya situation as a security problem.

Last October, insurgents alleged to be Rohingya managed to kill nine Myanmar border guards, an act that has brought an even more vigorous and brutal counterinsurgency or “clearance” operation to the area.

The danger of Islamist radicalisation on its doorstep has certainly garnered more interest in India than the ongoing scandal of systematic ethnic cleansing.

IN PICTURES: Rohingya – Chased from Myanmar, unwelcome in Bangladesh

If it continues to espouse any formal commitment to democracy and pluralism, India cannot remain silent on what is happening in West Myanmar or simply treat it as a strategic concern. A persecuted, effectively stateless and hounded people like the Rohingya make moral claims on all of us.

Rather than just pandering to the manifestly brutal and authoritarian military, India – and other South Asian nations – should be unambiguous in their condemnation of the bloodletting and ravaging being visited upon an entire population.

Above all it is time for India, along with other international players, to engage more robustly with Suu Kyi and put enormous pressure on her to undertake her primary duty: bringing the people of Myanmar back on to the true democratic path – and the only genuinely Buddhist one – of humane co-existence.

For in the misery of the Rohingya is writ large the great battle of our times: that between the lethal forces of populist bigotry and the lifegiving ones of actual democracy.

Priyamvada Gopal teaches in the Faculty of English at Cambridge University. She is the author of two books, Literary Radicalism in India: Gender, Nation and the Transition to Independence, and The Indian Novel in English. She is currently working on a book called Insurgent Empire: Anti-Colonialism in the Making of Britain.