US and Israel Join Forces to Bury Palestinian Statehood

Trump and Netanyahu are trying to push a more blatant and legalised form of apartheid on the Palestinian people. 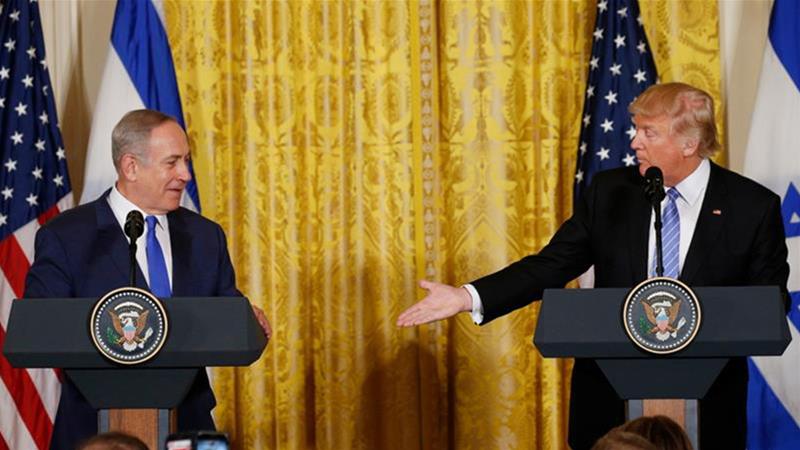 Unless four million Palestinians become Zionists overnight, it is unlikely that they will accept a Jewish state while agreeing to live without the same rights granted to Jews. [Reuters]

17 Feb 2017 – Thanks to the lovefest between Israeli Prime Minister Benjamin Netanyahu and US President Donald Trump, ignoring the Palestinian national leadership seems to be back on the front burner.

During both leaders’ first meeting since the new United States administration took office, Trump repeatedly talked about the need for the Israelis and Palestinians to make peace but avoided mentioning the Palestinian leadership.

Apparently fearing the repercussions of Washington’s withdrawal of both support for the two-state solution and recognition of the legitimate Palestinian leadership, the US sent CIA chief Mike Pompeo to President Mahmoud Abbas in Ramallah on Tuesday, February 14.

By sending the CIA chief rather than a political figure to visit President Abbas, the US is prioritising security issues – including joint security cooperation with Israelis – over the need to recognise Palestinian political and national aspirations.

Trump also casually walked away from a long-standing US and international consensus on the two-state solution, which has been the foundation of Palestinian-Israeli conflict.

‘Been there, tried that’

The US president’s naive comment on the two or one-state solution – saying he “can live with either one” – means Washington is likely to prolong the status quo of occupation.

Ever since the 1967 occupation, the United Nations Security Council has repeatedly expressed the illegality of the occupation, as in the preamble of Resolution 242 “emphasising inadmissibility of the acquisition of territory by war” (PDF).

By leaving the solution to the parties while, at the same time, politically bypassing the Palestinian leadership, the Trump administration is empowering the Israelis to dictate to the Palestinians any deal they want.

The sheer reality of the Israeli occupation and the absence of any political solution is a reflection of how Israel’s current tactics have not been producing any results for decades now.

The problem is that Trump and Netanyahu’s warm relationship and the former’s withdrawal of support for the two-state solution further weakens the US’ ability be an honest broker.

Hoping that Arab leaders will replace Palestinians and agree to make peace with Israel on behalf of Palestinians, is another mistaken proposal. As the saying goes, “been there, tried that”.

In the past, Arab leaders as well as Israeli and US leaders have tried to find an alternative leadership for Palestinians and have failed miserably.

For instance, Egypt and Jordan resisted pressures from Israel and the international community on who should represent the Palestinians in the 1970s, and in 1974 the Arab summit recognised the Palestinian Liberation Organisation (PLO) as the sole legitimate representative of the Palestinian people.

After the 1967 occupation, Israel tried and failed to bypass the PLO by turning a blind eye to Islamic charities established by Sheikh Ahmad Yassin, and as a result Hamas was born in Gaza.

The last time the US tried to bypass the Palestinians, it backfired spectacularly. Former US President George HW Bush – working with Secretary of State James Baker – pushed non-PLO Palestinian leaders to represent their people within a joint Jordanian-Palestinian delegation during the 1991 peace conference in Madrid. In response Israeli and PLO officials reached a secret deal in Oslo without the knowledge of Washington in 1993.

Netanyahu’s conditions to accept a two-state solution expressed in the Bar Ilan speech in 2009 have now an added element which negates the idea of an independent Palestinian state.

Dropping the commitment to a two-state solution virtually means a permanent presence of Israeli troops within the entire Palestinian territory.

Unless four million Palestinians become avid Zionists overnight, it is unlikely that they will accept and recognise a Jewish state while agreeing to live without the same political rights granted to Jews.

Netanyahu and Trump’s approach to the issue is pushing the region towards a more blatant and legalised form of apartheid in which the Palestinian majority in the occupied territories is stripped of their political rights while Jewish settlers enjoy full political and national rights.

The International Criminal Court describes this type of “institutionalised discrimination” as apartheid and sees it as a “crime against humanity”.

Moreover, the idea of a “grand deal” that includes Arab countries would similarly fail. Former US peace envoy for Israeli-Palestinian negotiations, Martin Indyk referred to the idea as an “outside-in” approach.

OPINION: Israel – An inspiration for Trump

Indyk’s proposal includes the idea of President Trump convening the leaders of the four Arab countries, Jordan, Egypt, Saudi Arabia and the United Arab Emirates, along with the Quartet, made up of the European Union, the US, the UN, Russia, to announce “a set of agreed principles that would serve as the terms of reference to direct Israeli-Palestinian negotiation to achieve a two-state solution”.

Such a summit would certainly not produce the results that Netanyahu or Trump wants. The 2002 Arab peace plan is very clear that Arabs will only meet and normalise relations with Israel once Israel agrees to withdraw to the 1967 borders.

The Quartet – with the exception of US – would also reject Trump’s casual idea of giving up on the two-state solution.

If Trump and Netanyahu’s meetings are expected to produce a political breakthrough, they should bear one basic principle in mind: The art of a deal requires that the dealmaker is honest and neutral, and parties in the conflict recognise and involve with each other.

If what we saw in the White House press conference is an indication, this prerequisite doesn’t exist in the current US administration.

Daoud Kuttab, an award-winning Palestinian journalist, is a former Ferris professor of journalism at Princeton University.