Outrage over abandonment of American values, coupled with judicial action, can deliver a powerful one-two punch. 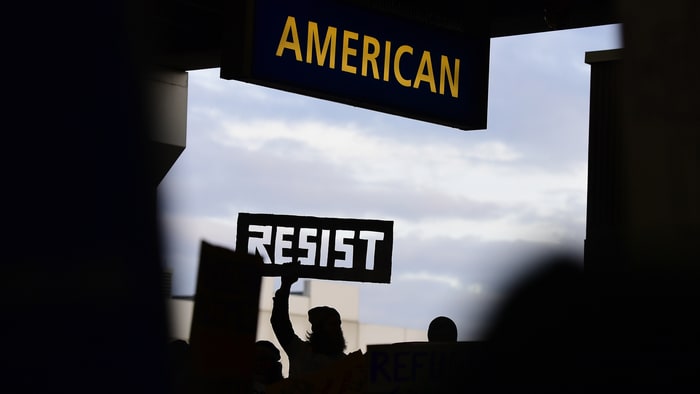 30 Jan 2017 – After the Women’s March, I wrote that Donald Trump and his Republican colleagues responded to the largest single-day protest in American history with a big middle finger by quickly acting, in direct contradiction to the March’s goals, to restrict reproductive rights, both at home and abroad.

This weekend, we saw our second set of mass protests against the Trump administration. At airports around the country, tens of thousands of people showed up to protest Friday night’s executive order that, among other things, temporarily banned all refugees, indefinitely banned Syrian refugees, and temporarily banned citizens from seven Muslim-majority countries.

Contrary to the immediate aftermath of the Women’s March, this weekend’s civil unrest worked. By Sunday night, the secretary of Homeland Security announced that the ban would no longer apply to green card holders – immigrants who are lawfully in the United States – who happened to be traveling abroad at the time the executive order was signed.

This was a huge, though incomplete, victory. Although it does not rescind any aspect of the executive order, a policy that is contrary to American ideals and has no connection whatsoever to actual terrorism, this announcement is an implicit recognition that the order went too far in keeping lawful permanent residents of the United States out of the country.

What’s the difference between the civil unrest last weekend and this weekend? Why did the Women’s March result in an almost-immediate “fuck you” to its participants while the airport protests resulted in the government changing course? The difference is that massive civil unrest can work when accompanied by judicial intervention, as the two together make a powerful one-two punch.

This weekend, as soon as there were reports that green card holders coming back to the United States were being detained at airports – or worse, sent back to where they came from – lawyers jumped into the fray. The ACLU as well as unaffiliated volunteer lawyers rushed to airports around the country to work the legal system on behalf of those detained. Within hours, these lawyers had filed lawsuits asserting a wide variety of legal claims. Some of the claims argued that the executive order violated the immigration statute’s requirement that presidential actions not discriminate on the basis of country of origin. Other claims were based on the Constitution. These claims argued that the order restricted religious rights, endorsed Christianity, denied basic procedural protections and violated equality principles.

While this was going on, the people of this country took to the streets and, in a novel twist suited to this particular situation, to the airport terminals. In cities big and small, people dropped what they were doing for the weekend and rushed to their local airports to protest. Protests started Saturday during the day and became even bigger on Sunday. In some places, airport protesters were complemented by protesters who filled city streets and squares.

During the day on Sunday, there was mass confusion about what was happening with the people who were being detained at the airports. At first, there were widespread reports that the Customs and Border Patrol was not complying with the court orders. A confusing memo released Sunday morning from the Department of Homeland Security did not help matters, as it said in the beginning that the executive order remained in full effect, but at the end that the Department would comply with all judicial orders.

However, Sunday evening, the Trump administration buckled under the weight of public and judicial pressure. Homeland Security Secretary John Kelly released a short statement indicating that lawful permanent residents would be admitted to this country because doing so is “in the national interest.” The statement does not rescind the executive order; rather, it says that the Department will apply the order but will find, absent an indication of a threat to public safety, that all lawful permanent residents fit the order’s exception for people being admitted when it is in the national interest. In other words, the executive order still stands, but it won’t be applied in this one egregious fashion.

This victory – a limited, but hugely significant one – needs to be celebrated for how it happened. People outraged over an abandonment of American values with respect to immigrants engaged in spontaneous mass disruption and protest. They did it on the heels of a massive protest that had primed the country, as the Women’s March principles included a recognition of the dignity of immigrants and Muslims. But the protests were not happening in isolation. The protesters were joined by lawyers who courageously fought the system and judges who followed the constitution. The legal system stepped in and echoed what the protesters were saying – that the Trump administration had gone too far.

The lesson here is clear. Tyranny is best fought on multiple fronts. We can’t let up in the streets, just as the lawyers can’t let up in the courts. Combining these tactics is our best bet to save democracy from the clutches of the current administration.