A People without a Country 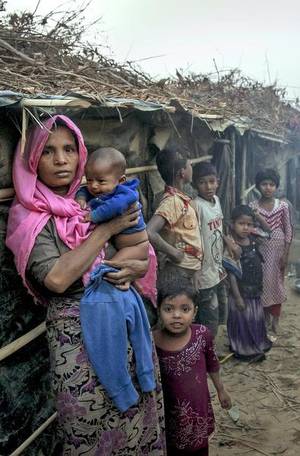 26 Feb 2017 – “Why are we punished, we are not involved in any militancy,” says Insan Ali, an elderly man living in the Teknaf refugee camp in Bangladesh’s Cox’s Bazar. He’s one of the thousands of Rohingya Muslims who fled Myanmar’s Rakhine State in recent months after the Army carried out a four-month long operation against “militants”.

Mr. Ali is from Maungdaw in Rakhine and reached Cox’s Bazar, a resort town in southeast Bangladesh, with his family after a perilous journey across the Naf river that marks parts of the Bangladesh-Myanmar border.

After the recent military operation began in Myanmar, an estimated 69,000 Rohingya Muslims have taken a dangerous boat journey to reach Bangladesh

Myanmarese authorities launched the military operation in Rakhine, home for most of the country’s 1.3 million Rohingyas, in October 2016 after an attack on a police post. Rohingyas are seen as illegal immigrants by the Buddhist-majority Myanmar and are denied full citizenship. After the operation began, an estimated 69,000 people have taken the dangerous boat journey to Bangladesh. They have found temporary refuge in the Cox’s Bazar region. Most of them are in Teknaf, nearly 80 km from Cox’s Bazar town, and Ukhia, 33 km away. They have horrifying stories to tell. The refugees The Hindu spoke to described stories of Myanmarese army-men torturing people, burning down houses and taking away young Rohingya women to their camps after killing the men. The International Organisation for Migration and Médecins Sans Frontières, which got permission from the Bangladesh government to operate in the refugee camps, provided primary medical aid to rape victims.

Bangladesh’s predicament is clearly visible. Initially, its border guards pushed back the boats coming to its shores packed with fleeing Rohingyas. Later, they were allowed to come in. “We have given them only the emergency services on humanitarian considerations,” says a government relief official at Teknaf. “This is only a temporary arrangement.”

Recently, Dhaka announced a plan to relocate the refugees to Thengar Char, an uninhabited island in the Bay of Bengal, some 60 km off the mainland. The island, about 30,000 hectares in size, is often flooded during monsoon. The plan has come under attack from human rights groups as well as the UN.

Refugees have already crowded the areas surrounding Cox’s Bazar, which is daily visited by thousands of tourists looking to enjoy one of world’s longest natural sea beaches. Government officials say the sudden influx of refugees have triggered security concerns. Foreign Minister A.H. Mahmud Ali says human trafficking and narcotics smuggling networks have grown in strength in the region in recent months, exploiting the refugees’ “vulnerable nature”. A journalist in Cox’s Bazar agrees: “The Rohingyas, poor and socially insecure, are known to fall prey easily to unscrupulous people, and are allegedly involved in smuggling and narcotics trade.”

Besides, Bangladesh fears that Islamist hard-liners, who staunchly support the Rohingya Muslims, are trying to exploit the situation for their political benefits. Some sections of the Rohingyas have formed armed guerilla groups in Rakhine to fight Myanmar’s Army and operate along the mountainous border. The Bangladesh government says it is opposed to insurgents, domestic or foreign, using its territory for illegal activities.

However, experts warn that Bangladesh already faces Islamist challenges, and, if the crisis goes on, it will threaten peace and security in the region. “Unless Myanmar addresses the core issues, the region may turn into a fertile breeding ground for extremist ideologies,” says a UNHCR official in Cox’s Bazar.

Haroon Habib writes for The Hindu and is based in Dhaka.