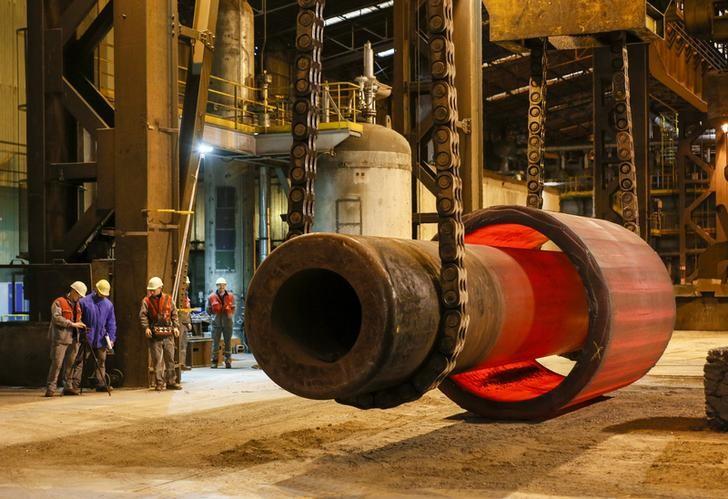 Workmen are seen in the foundry at the Areva Creusot Forge site in Le Creusot, France, January 11, 2017. REUTERS/Robert Pratta

16 Mar 2017 – Creusot Forge, a supplier of nuclear plants around the world owned by France’s Areva (AREVA.PA), is under investigation for making substandard parts and falsifying documents.

Now, France’s nuclear regulator says machinery at the plant, which was shut for commercial production last year, is not up to the job.

In an interview, Remy Catteau, the head of nuclear equipment at the ASN (Nuclear Safety Authority), said that an inspection of the plant late last year showed that it did not have the right equipment to produce the parts for the nuclear reactors.

“Creusot Forge is at the limit of its technical capacity. The tools at its disposal are not adequate to manufacture such huge components. In such a situation, errors are made,” Catteau told Reuters by telephone.

“The inspection brought to light the fact that the safety culture in the plant is not sufficient to produce nuclear components.”

The disclosure adds to the problems of Areva, once the world’s biggest nuclear company, which owns Creusot Forge.

Areva shut the factory after it found that manufacturing documents at the plant may have been falsified over some 40 years and parts made by the foundry did not meet specifications.

Authorities around the world have checked the nuclear reactors using the parts. Two reactors in France – Fessenheim 2 and Gravelines 5 – were shut after the checks due to safety concerns.

The investigation by the regulator is ongoing but Areva hopes to restart production at the factory this summer, if ASN allows it.

Creusot Forge is one of the world’s few foundries able to make the huge steel components that form the heart of nuclear reactors and is a key part in the French nuclear industry’s supply chain.

Areva clients, which include France’s EDF (EDF.PA) and utilities across the world, could take their business elsewhere if the plant stays shut. Areva could also subcontract its foundry work to other nuclear specialists such as Japan Steel Works and Mitsubishi Heavy Industries (7011.T).

Catteau did not say whether ASN believed the machinery needed to be replaced before Creusot Forge could reopen.

A spokesman for Areva declined to comment on the foundry’s equipment. He said the plant still has a future as Areva would invest 8 million euros (£6.94 million) to guarantee the quality of components. He said Areva aimed to restart commercial activities at Creusot Forge by the summer.

ASN wrote to Areva in January with a list of questions about quality and safety at the plant but did not focus on the equipment. ASN has said Areva must answer them by the end of March. It is not clear what criteria ASN will use for deciding if the plant can be reopened or how the response to the questions is linked to the potential reopening.

The plant makes steam generators and other components for current-generation nuclear plants but was also tasked with making large parts for a new generation of European Pressurized Reactors (EPR). Britain has approved EDF’s project to build two EPRs in Hinkley Point and Creusot Forge is expected to make some of its parts.

Precision is critical when making parts such as containment vessels, which are huge steel cylinders that house the reactor core and control rods.

Creusot Forge made the vessel lid and bottom for the Flamanville 3 EPR reactor under construction in western France. But at the end of 2014, Areva discovered excessive carbon concentrations in those components, which weaken the steel.

“For Flamanville 3, the equipment was at its limit, there was no margin for error,” Catteau said.

Flamanville’s future is now uncertain. The ASN will rule by the summer whether the new reactor can go into operation by 2018, despite those weak spots. A red light would lead to years of further delays for Areva and its customer EDF.

Regulators from the U.S., Britain, China and other countries are also looking into quality and manufacturing issues at the Creusot Forge foundry in eastern France after Areva unearthed the false manufacturing documentation from the 1965-2013 period.

“One of the ways to resolve problems was to hide things, and that was the wrong way,” Catteau said.

The letter sent to Areva in late January demanded answers to questions over quality control, staffing levels, management oversight and training and compliance with International Atomic Energy Agency (IAEA) standards. Catteau noted that Areva had a plan to overhaul its operations.

“But there is still a lot to do before Creusot Forge will be at the right level,” he said.

The ASN has long warned that the financial difficulties of France’s nuclear industry pose a safety risk, and Catteau said this could also partly explain Creusot’s quality breakdowns.

Critics of France’s nuclear energy establishment say the problems at Creusot Forge prove that oversight of the whole industry, including the ASN, needs an overhaul.

World Nuclear Industry Status Report author Mycle Schneider said France’s parliament should task independent experts with an inquiry, but he does not see the political will for that.

“The entire chain of responsibility has failed, from Areva to its client EDF and the ASN. I don’t see an initiative yet that addresses the entire scope of the problem,” Schneider said.