The move will hike military spending back up above education funding after Dilma Rousseff’s government pared back the defense budget. 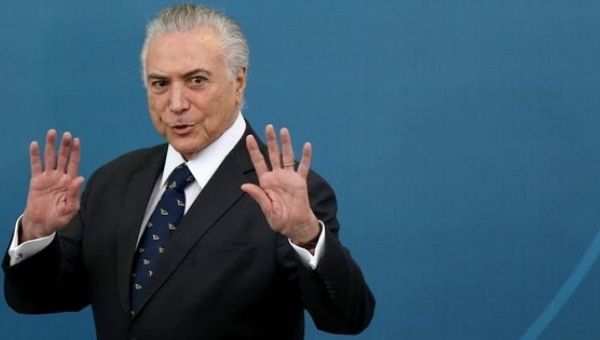 Brazil’s Michel Temer has been under harsh fire since being installed as president last August after an impeachment process condemned as a coup. | Photo: Reuters

13 Mar 2017 – Brazilian President Michel Temer has hiked the country’s military budget by 36 percent, local media reported Monday [13 Mar], just months after he pushed the approval of a controversial constitutional amendment to freeze public spending in the country for the next two decades.

According to a report by Brazilian newspaper Folha de Sao Paulo based on Senate data, military spending for this year is set to hit nearly $US3.1 billion after seeing cuts under the government of former President Dilma Rousseff, ousted last year in a process widely condemned as a parliamentary coup.

The defense budget hike makes military spending the second largest government expenditure, even ahead of education, which has remained at the same level since the 2015 economic crisis and only received only about US$ 1.8 billion in 2016. Transportation, which also suffered from the crisis in 2015, is set to receive the highest investment in Brazil with about US$ 3.3 billion.

Defense Minister Raul Jungmann justified the budget changes by saying that the values destined for defense are far below advisable and necessary.

“There has been a rebuilding, which we are working on, but we still have a long way to go to reach the peak at the beginning of 2010,” said Jungmann.

The military budget of the Ministry of Defense is set to be divided between the 3 branches of the Brazilian Armed Forces: Navy, Air Force and Army.

The changes come after Brazil’s military budget got a haircut under Rousseff’s government. In 2015, the finance minister at the time, Joaquim Levy, drastically reduced investment in the sector. From the US$ 3.8 billion expected to be spent in the area, it only allocated US$2.1 billion, according to Senate data.

Temer’s move to increase military spending also comes after the approval of a constitutional amendment to freeze public spending for two decades. The reform, previously known as PEC 241 and PEC 55, ties any increase to social assistance programs to the previous year’s inflation rate, rather than GDP. This will effectively limit what all future governments can spend on health, education and social welfare for at least 20 years.

The government’s sweeping privatization agenda paired with aggressive cuts to social spending have sparked waves of massive protest in the South American country against neoliberalism and in defense of democracy.