“The colonial history, enslavement, segregation, racial terrorism and racial inequality in the U.S. remained a serious challenge,” the report noted. 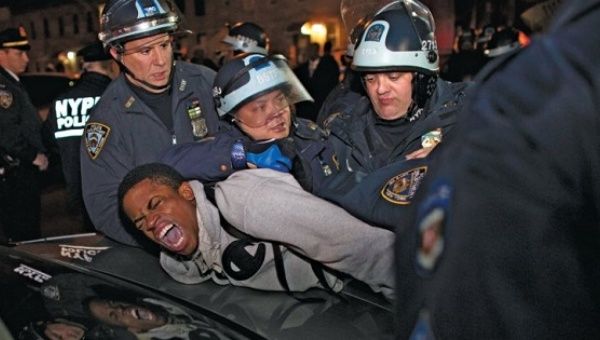 On Thursday [9 Mar 2017], China’s State Council Information Office released a human rights report on the U.S., noting that while that country continues to act as “the judge of human rights” it continues to ignore its own “terrible problems.”

The report, called “Human Rights Record of the United States in 2016,” cites both international and U.S. academic and NGO sources focussed on that country’s domestic and international human rights record.

“Wielding ‘the baton of human rights,’ (the U.S.) pointed fingers and cast blame on the human rights situation in many countries while paying no attention to its own terrible human rights problems,” the report declared.

“With the gunshots lingering in people’s ears behind the Statue of Liberty, worsening racial discrimination and the election farce dominated by money politics, the self-proclaimed human rights defender has exposed its human rights ‘myth’ with its own deeds,” it added.

On the domestic front, the report highlighted the prison industrial complex which has led to the U.S. having the second-highest incarceration rate in the world, with almost one in three adults having a criminal record. Only the Seychelles, with the smallest population in Africa, has a higher portion of its population in jail.

The report also noted that in 2016 “the colonial history, enslavement, racial subordination and segregation, racial terrorism and racial inequality in the United States remained a serious challenge,” where “Police killings were reminiscent of the past racial terror of lynching.”

Citing child poverty rates, the growing gendered wage gap, and sexual assault and harassment complaints in the U.S., the report concluded that “there was no improvement to the protection of rights of women, children and elders, and the vulnerable groups’ rights were seriously violated.”

RELATED: 1 in 2 US Kids Live in Poverty, Worse for Minorities

The report also concluded that political rights in the U.S. were under threat given that “money politics and power-for-money deals had controlled the (2016) presidential election,” resulting in record low turnout and voter alienation.

On the international front the report noted that “in 2016, the United States continued to trample on human rights in other countries, causing tremendous civilian casualties.”

The report noted that the U.S. air campaigns in Syria and Iraq had killed between 4,568 and 6,127 civilians and that since 2009, its illegal drone program had left 800 dead in Pakistan, Yemen, and Somalia.

It also highlighted the remaining 59 illegally detained prisoners at Guantanamo Bay and the U.S. failure, in contravention of international law, to investigate and punish documented war crimes and torture committed by U.S. soldiers and CIA agents during its 16-year so-called “war on terror.”

The report closed by saying that the vast domestic and international surveillance network exposed by Edward Snowden, which “drew vast criticism from the international community,” presented a grave threat to privacy rights worldwide.

The release of China’s report comes one week after the U.S. released its own 2016 report on human rights throughout the world, a report which was widely condemned as, at best, a hypocritical exercise in using appeals to human rights as a tool to further U.S. foreign policy interests.