21 Mar 2017 – At the end of his ruthless massacre and war against an unarmed people, General Amir Abdullah Khan Niazi who led the Pakistan army in the killings, described the genocide of Bangalis in his book Betrayal of East Pakistan as “a display of stark cruelty more merciless than the massacres at Bukhara and Baghdad by Chengis Khan and Halaku khan or Jallianwala Bagh by the British General Dyer.” 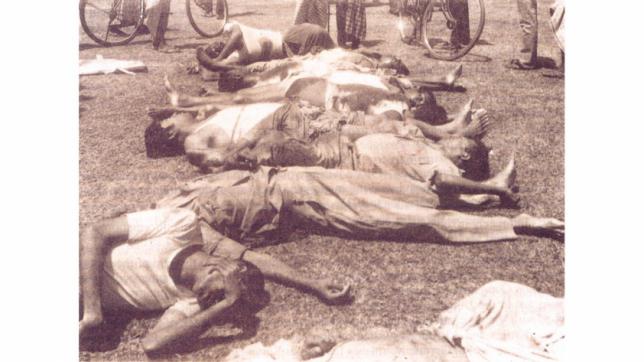 The world hardly paid heed to the ruthless killings going on in Bangladesh in those long nine months. The tales of the macabre were told and retold by countless many here. And yet, the world did not have time to listen.

Forty-six years after the bloodbath that hardly left any family untouched, Bangladesh has finally taken initiatives to get recognition of the Pakistan army led genocide by the UN.

Ahead of Bangladesh observing March 25, the day when the Pakistan army unleashed its war machine against a sleeping population, as Genocide Day, the government will send two senior officials to the UN headquarters in New York and the United Nations Human Rights Council (UNHRC) headquarters in Geneva.

They will talk to senior UN officials to start the process of getting UN recognition of the Pakistani atrocity.

“This is a tall task, needing support from many,” Shahriar Alam, state minister for oreign affairs, told The Daily Star yesterday. “We will approach those countries like Russia, India and the UK which had supported our cause in 1971 so that these countries pass resolutions in their own parliaments to recognize the killings in Bangladesh as genocide.”

Shahriar said the foreign ministry has also set up a desk with two secretaries which will monitor the task.

The UN has recognized two massacres as genocide – the Holocaust and the Rwanda genocide.

Although the world leaders did not pay heed to the grisly murders in this part of the world, often considered as a backwater in the then geopolitical map dominated by the Soviet Union, China, Pakistan, India and Indo-China, concerns were raised by the world press at the time.

The New York Times in a piece in May of 1971 called the killing “one of the bloodiest slaughters of modern times.”

In April that year, New York Times, in an editorial headlined “Bloodbath in Bengal,” condemned Washington’s silence on what it called the “indiscriminate slaughter of civilians and the selective elimination of leadership groups in East Bengal.”

The Sunday Times published articles and editorials under headlines of “Genocide.”

The US Consul General in Dhaka, Archer Blood, sent a telegram to Washington headed with the phrase “Selective Genocide.”

The recently published book by Prof Gary Bass, based primarily on the declassified White House tapes, has been named as Blood Telegram: Nixon, Kissinger and a Forgotten Genocide.”

The then UN Secretary General, U Thant, on June 3, 1971, wrote to the President of the Security Council saying “The happenings in East Pakistan constitute one of the most tragic episodes in human history. Of course, it is for future historians to gather facts and make their own evaluations, but it has been a very terrible blot on a page of human history.”

But world leaders would not pay much attention to these pleas in the then complicated geo-politics. The onus of having it recognised internationally as genocide and for the dead to be recognised as victims of genocide fell on Bangladesh.

The cabinet yesterday at a meeting with Prime Minister Sheikh Hasina approved March 25 to be observed as Genocide Day, clearing all formalities to recognise the brutal genocide committed on this day in 1971.

On March 11, the Jatiya Sangsad passed a resolution to observe the day as Genocide Day.

From now on, the Government of Bangladesh will observe March 25 as Genocide Day.

“The foreign ministry has started efforts to have the day recognised internationally,” Cabinet Secretary M Shafiul Alam said in a press briefing after the meeting.

What significance will UN recognition have? First, it will officially document the atrocities of war against this population by a brutal regime. For humanity to move forward, it has strong significance. A crime has been committed and that has to be recognised as a crime. Otherwise, humanity will see recurrence of genocides. It is also a process of shaming the perpetrators.

Secondly, if Bangladesh takes forward charges against the Pakistani leaders and soldiers for war crimes in international courts, this recognition will help it happen as such recognition has been in the case of the Bosnian genocide.