With so much at stake, the TMT (Thirty Meter Telescope) project most certainly begs more than just a question or two.

2 Mar 2017 – To the dismay of so many Native Hawaiians, environmentalists and supporters around the globe, the condition of Mauna Kea is grim.

This once pristine mountaintop, the highest on the planet measured from the sea floor, has become an Industrial Park in the middle of one of the most sacred sites in all of Polynesia.  There are 13 telescopes already built in this Conservation Zone where a thousand years of ceremony and the bones of ancient ancestors reside.

Most were constructed with the assurance that no more would be built and that some would even be decommissioned.  None have been taken down thus far and the proposed TMT, (Thirty Meter Telescope), would be the largest and most destructive of them all.

Christian Cosmology, Politics and Science, have often expressed empirical and colonialist attitudes frequently dismissive of differing perspectives. When profits are involved, the sanctity of Nature and the Kapu, (Protected, sacred, forbidden), of Sacred Sites is simply ignored. 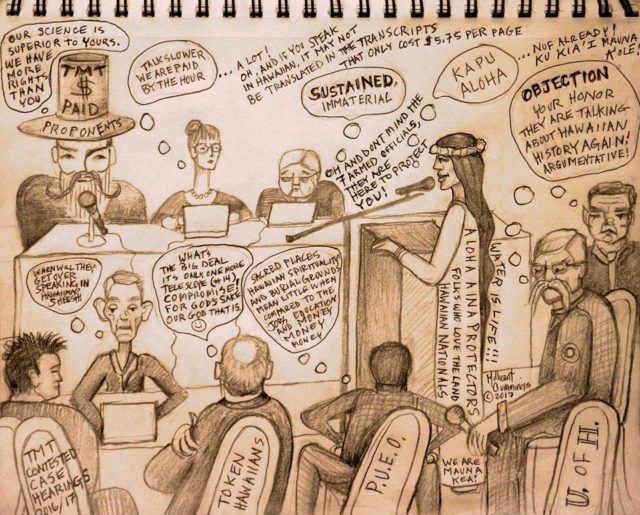 Millicent Cummings has been attending the contested case hearings on the TMT. She wrote this commentary and drew this cartoon.

The Mayor of Maui, Alan Arakawa, said in a recent interview regarding certain sacred stones in Iao Valley, “It’s very simple, there’s no such thing as sacred rocks. The Monarchy … declared Christianity the religion of Hawaii … (Thou shall have no false god before me). There are no sacred rocks in that religion.”

Exposing his blatant disregard for Kanaka Maoli, a culture protected by State Constitution, he simultaneously offended both non-Christians and Christian Hawaiians who still revere the Aina the same way their pre-contact ancestors did.  It revealed an ethnocentric attitude, severely inappropriate for a so-called “Representative. ”

Unfortunately, this blatant bigotry is a disturbingly frequent attribute that has reared its tiresome head throughout these costly Contested Case Hearings — $2 million of taxpayer monies have been spent thus far on a case that is hardly closed.

The Materialist worldview that stones are useless, useful, or highly profitable, but never sacred, has led to unmentionable crimes against humanity and their environments. Through its lens, human lives could be considered mere collateral damage, and what sustains their lives as a mere resource, instead of a basic human right.

Meanwhile, it is unscientific to continue refuting the interconnectedness of life and living systems.  What is done to the land, is in fact done to the people.  This isn’t some antiquated, native mumbo jumbo but rather, a scientific fact based on generations of keen, repeated observation.

Nevertheless, for many astronomers, businessmen, governments, police and others, this “property’” is simply a resource to be utilized, profited from and even destroyed if necessary.  This self serving conclusion comes with a sense of entitlement, as well as a reputation for bypassing State, Federal and secular regulations, safety measures, legal permitting process’ and local protocol with the host culture.  In fact, they don’t appear to even acknowledge the concept of a host culture, viewing the Kanaka Maoli much like a pirate might see the booty of a just and legal conquest.

Unfortunately the illegal overthrow and subsequent occupation of the Kingdom of Hawaii was and remains, neither just, nor legal. Even 130 years later, the native cultural, spiritual and environmental aspects of the whole, unified story are deemed secondary to the Western narrative.

The questionable EIS, (Environmental Impact Study), barely touching upon the cumulative effects of this project, is a perfect example. It has never been able to meet the requirements of the eight criteria set up to protect this Conservation Zone in an Historic Precinct, as the law requires.

Stretching the truth and even lying outright to conceal that fact, has been a notably rampant occurrence.  It continues to move forward without a permit knowing full well that if the Hearings Officer votes in its favor, a scenario much like Standing Rock in North Dakota will unfold on Mauna Kea.  With so much at stake, this project most certainly begs more than just a question or two.

Why for example, is the TMT Corporation so confident that the lease will be extended to justify an otherwise foolhardy investment of $1.4 billion? The lease runs out only a few years after the building’s completion.

Why is the DLNR, (Department of Land and Natural Resources), and the OMKM, (Office of Mauna Kea Management), who have already had scores of complaints regarding their mismanagement of this Sacred place, being given jurisdiction to desecrate any further? There have been issues with oil, mercury and hydraulic fuel leaks and spills as well as industrial trash on the mountain.

And how is it that so many of the previous telescopes were not even permitted until after they were built, while Native Spiritual Practitioners must apply to the DLNR for a permit to build even the smallest ahu (altar)?

Indeed, many other questions await those who look deeper than the daily news.  Due process has not been observed in these hearings wrought with gag orders, procedural defects, plagiarized and falsified testimonies by TMT proponents, and numerous other illegalities.

But on a positive note, one extremely beneficial thing to come out of these proceedings is the record left behind to educate those who claim to love Hawaii.  Na Leo TV has recorded every hearing, a veritable library on the subject of how colonialism, bigotry and racism still operate.

It is also a testament of how the “Protectors” continue to practice their Love of the Land regardless, fighting “To the last Aloha Aina” for what sustains the life and livelihood of both native and foreigner alike. They have done this under unfathomable duress and continue to do so with admirable and even saintly Aloha.

In terms of land management, time has witnessed and will attest to their irrefutably superior knowledge.  The Protectors are not fighting “progress” but rather, fighting to protect the water and land for both this and the next seven generations.

The issue has never, in its insanely contentious history, been about the ineptitude of the Kanaka Maoli to grasp the genius of Haole Science, but rather, quite the reverse.

Millicent Cummings is a Protector, musician, artist, writer and mother.

Community Voices aims to encourage broad discussion on many topics of community interest. It’s kind of a cross between Letters to the Editor and op-eds. This is your space to talk about important issues or interesting people who are making a difference in our world.