Stewart, originally sentenced to 28 months in prison, was resentenced on July 10, 2010, to 10 years in prison, but continued to fight a government frame-up. 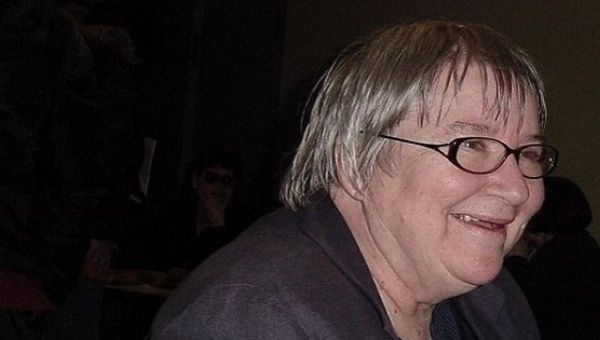 7 Mar 2017 – After suffering a major stroke on March 1, Lynne Stewart died Tuesday evening at home, after being granted a compassionate release from prison three years ago due to fourth-stage breast cancer.

RELATED: From Mumia to Peltier, US Political Prisoners Still Locked Up

Stewart devoted her law practice to defending the poor, underprivileged, unwanted and forgotten, according to her partner Ralph Poynter.

The human rights attorney was arrested on April 9, 2002, on charges of helping pass messages from her client, Sheikh Omar Abdel-Rahman, an Egyptian cleric convicted of masterminding the 1993 World Trade Center attack in New York City, to his followers in al-Gama’a al-Islamiyya, an organization designated as a foreign terrorist organization by the U.S.

Stewart was subsequently convicted for conspiracy and providing material support to terrorists, while her felony conviction led to her automatic disbarment.

Her sentence was characterized by many as an attempt by the U.S. government to silence dissent, curtail vigorous defense by lawyers, instill fear in those who seek to help Arabs and Muslims being prosecuted for free speech and defend the rights of all oppressed people.

Attorney Leonard Weinglass, said of her incarceration, “The Lynne Stewart case is the case that’s going to mark this era as the era of the war on terrorists, which includes the war on lawyers who defend those who are accused of terrorism. To put her behind bars when no one was injured, no one was harmed, when those who produced the torture memos, those who produced the war are going free and even prospering is really the irony of our time.”

Stewart fought false accusations and a government frame-up. Originally sentenced to 28 months in prison, she was resentenced on July 10, 2010 — in an unprecedented move after her bail was suddenly revoked — to 10 years in prison for showing an alleged lack of remorse after her initial sentencing.

In a statement after her release on Dec. 31, 2013, Poynter said, “The enduring global movement for social justice has persevered — ever inspired by Lynne Stewart’s steadfast refusal to bend the knee, submit to coercion or official duplicity.”