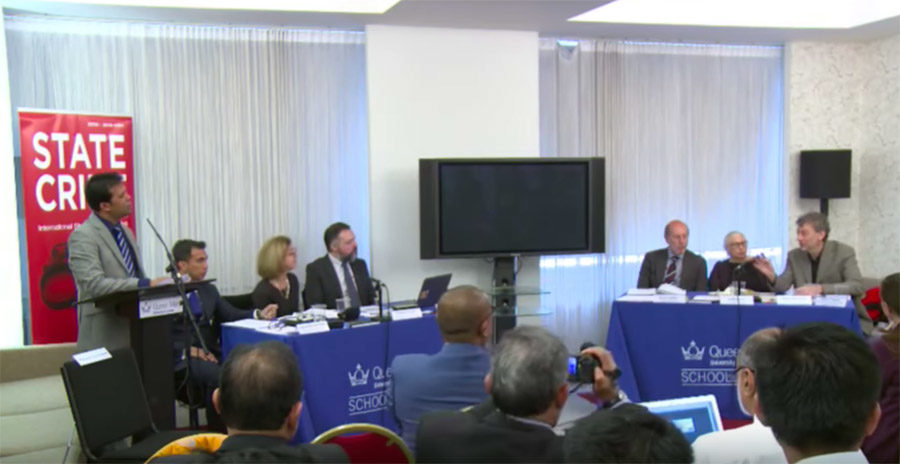 9 Mar 2017 – In proceedings described by witnesses, prosecutors and jurists as a “historic moment,” the Rome-based Permanent People’s Tribunal (PPT) launched a session this week exploring allegations of state crimes against Kachin and Rohingya communities in Burma.

“The first objective is to give visibility,” said the PPT’s permanent secretary Dr. Gianni Tognoni, on the purpose of the opinion tribunal opening held in London from March 6-7 and webcast live.

Representatives from the Burmese government were invited but did not attend the session—in an act of symbolism, an empty chair labeled “Myanmar Government” was placed in the room for the duration of the launch.

Witnesses from the Kachin National Organization (KNO), the Center for Human Rights Research and Advocacy in Malaysia, the Burmese Rohingya Organization UK (BROUK) and professors from Queen Mary University and the School for Oriental and African Studies (SOAS) testified before a panel of three jurists—international experts on genocide and international law; the Dalai Lama also sent a statement in support of the proceedings.

Through both live and videotaped testimony provided by activists and lawyers, Rohingya refugees and internally displaced Kachin described suffering a range of abuses, from sexual violence to military air strikes and shellings of their homes. 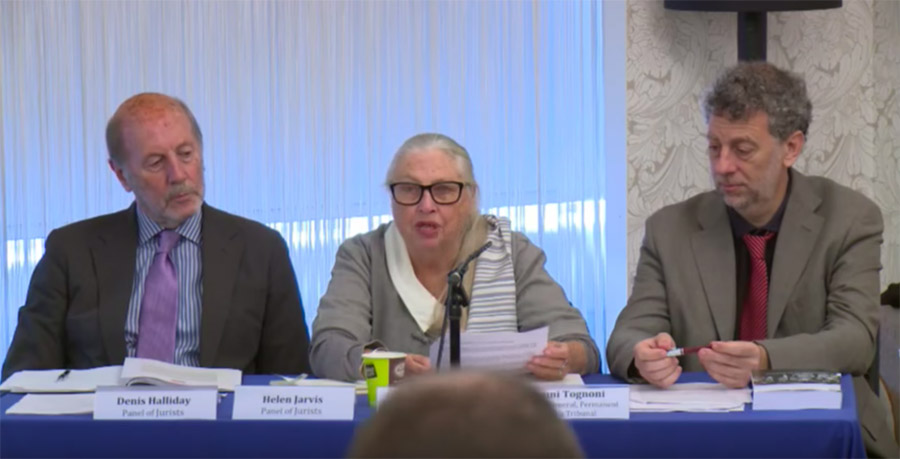 Dr. Mandy Sadan, SOAS professor, historian and author, spoke on the historical context in which the current violence in Burma has unfolded. She was the first at the event to emphasize the significance of the Kachin and the Rohingya presenting testimony together—an observation echoed by members of the prosecution team and the jurists.

“This is one of the first occasions in which one of the largest non-Burmese groups have chosen to ally themselves with the Rohingya,” Dr. Sadan said of the Kachin. “This is a vitally important aspect of this tribunal.”

With regard to the joint participation with the Rohingya, the KNO’s Kai Htang Lashi said: “Their suffering is our suffering. We share the same perpetrator—the state, the military institution. One community is not more important than another community. We all suffer.”

After a hearing a full day of testimony, the panel of jurists presented a joint statement declaring that the charges put forward “demand adjudication by the Permanent People’s Tribunal.” Dr. Helen Jarvis, who once served as a public affairs officer on the Khmer Rouge Tribunal, described the abuses as fitting into three categories: “identity framing” through the exclusion of ethnic and religious minorities, allegations of war crimes and crimes against humanity against the Kachin, and allegations of war crimes and genocide against the Rohingya.

Of particular concern, she explained, were demographic shifts linked to these patterns, noting that, according to testimony, 10 percent of the Kachin population was now internally displaced, and that the Rohingya population in Burma had been “halved” in less than 40 years.

Member of the panel of jurists and former UN Assistant Secretary-General Denis Halliday urged for greater political leadership from Asean in encouraging the Burmese government to address allegations of human rights violations, and described what he sees as the impotence of the United Nations Security Council and the International Criminal Court in prosecuting crimes—like those described to the tribunal—under international law.

A full and broader session of the PPT concerning Burma will be convened within six months, likely in Kuala Lumpur, Malaysia, to produce a “reasoned judgment.” The jurists and conveners of the tribunal have extended an open invitation to other groups in Burma who wish to bring their experiences before the panel in future sessions.

PPT President Dr. Tognoni described the evidence presented in the opening session as “compelling,” but noted that it needs, “in order to be really evaluated and assessed, further documentation and systematization.”

In the next session, jurist Denis Halliday recommended that the PPT look into issues of “complicity” by international investors, agencies and countries such as the UK, US, China, France, and Israel, for promoting “security and investment” instead of confronting allegations of abuses by the state.

People’s tribunals—of which there have been 42 sessions convened globally since 1979—are not necessarily directed at “the powerful,” said Daniel Feierstein, a genocide scholar and jurist on the current tribunal.

Those in power he explained, “not only know what happens, but they [may] be the indirect or direct perpetrators or accomplices in what is happening.” Therefore, opinion tribunals are “more of a call to the people, to take care of the suffering of others, even if they are suffering too. And I feel that’s what happened yesterday and today,” Feierstein said in his closing comments.