Reports Expose Widespread Use of Child Labor in the Congo

23 Mar 2017 – In late February, Sky News aired an investigative report centered on the utilization of child labor in cobalt mines in the Democratic Republic of the Congo. The investigation shed light on a vastly complex apparatus of the most brutal forms of exploitation utilized to extract the Congo’s vast mineral wealth.

A reporting team, which visited several mines in the Congo’s southeastern Katanga province, found children being used as laborers in all of them. 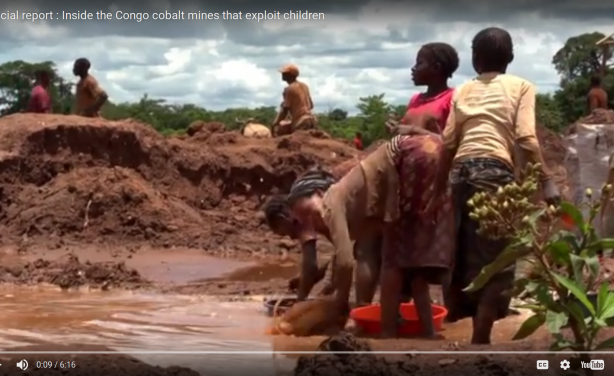 One child named Dorsen, who is aged 8, told the reporting team that he does not make enough money to buy food, and had not eaten in two days, despite toiling for 12 hours per day. His friend Richard, aged 11, talked about how sore he got from the intense physical labor he was forced to undertake in the mine.

The report also highlighted the grievous health effects on communities in and around the mines; the World Health Organization has declared that dust and particles from cobalt, which are a by-product of the mines, are hazardous to breath and cause deleterious health effects. Miners, both children and adults, are not provided with safety equipment, nor do the mines execute proper protocols for proper disposal of mine waste.

Sky News reporters found a villager residing near a mine, Makumba Mateba, who had a tumor on his throat that he believes is a result of breathing the dust fumes from the mine. “We only drink the water which comes from the mining sites after all the minerals have been washed in it. It comes right through our village and I drink it and I’m sure it’s that which has made me sick.”

While it exposed these horrifying and criminal labor and living conditions, the report failed to draw the conclusion that the horrific labor and business practices uncovered in the Congo are not an isolated occurrence but rather the predominant reality inflicted by the capitalist system on workers around the globe.

Cobalt is one of the primary minerals used in the manufacture of lithium batteries, used in smart phones and laptop computers. More than half of the world’s supply of cobalt originates in the Congo. The companies that utilize cobalt from the Congo for production—Apple, Samsung, and Microsoft, to name a few examples—reach a combined market share of over $100 billion, with many of the firms registering record profits in recent years.

According to a study concerning child labor in the Congo in 2016 produced by Amnesty International, children as young as 7 work in the mines under intense weather conditions, and under coercive conditions and beatings by bosses. They carry back-breaking loads, and descend into mines that frequently collapse, and work with no protective equipment. In addition to working long hours, they are paid at the rate of $1-$2 a day. UNICEF has estimated there are at least 40,000 children in the Congo living under forced labor conditions.

The response of the large technology companies to the study was flat denial, or feigned ignorance. Apple, for its part, responded, “Underage labor is not tolerated in our supply chain and we are proud to have led the industry in pioneering new safeguards.”

This claim is belied by the fact that one of Apple’s supply chain sources is the Chinese mineral firm Huayou Cobalt, which obtains 40 percent of its cobalt from the Congo for use in its products, such as the iPhone. Apple raked in $9 billion in profits in 2016 and holds an astounding cash and securities reserve of more than $246 billion.

Mark Dummett, a business and human rights researcher for Amnesty International, told the Guardian last year, “Around half of all cobalt comes from the DRC [Democratic Republic of the Congo], and no company can validly claim that they are unaware of the human rights and child labour abuses linked with mineral extraction in the region.”

Additionally, in 2015 the US Department of Labor conducted its own investigation into the use of child labor in the Congo. That report found that many mines employing children are operated by or for the various militant rebel groups currently carrying out bloody operations in the Congo, particularly in the eastern and southeastern regions of the country.

These militant groups are engaged in a multi-decade conflict for control of the Congo’s economic resources. The general disorder and chaos in the region has its genesis in the imperialist policies of Washington and the capitals of Europe, the brutal extraction of raw resources and minerals has a long and sordid history in the nation.

The Congo Free State was founded in 1885 by King Leopold II of Belgium as his own personal colony. Leopold made money off of the colony first through the harvesting of ivory and then by the extraction of rubber by forced labor. Historians estimate that as many as 15 million Congolese workers died under the brutal labor regimen enforced by the Belgian monarch’s mercenaries.

The Congo remained a Belgian colony until independence in 1960 and the election of the country’s first democratically-elected leader, Patrice Lumumba.

US imperialism was distinctly unhappy with Lumumba, who had promised that the newly independent country’s vast resources would be used to benefit its people. The CIA, in collaboration with Belgium, set about to remove Lumumba and replace his government with the brutal dictatorship of Joseph Mobutu.

Lumumba was arrested, then subsequently snatched from his jail cell and killed, his body was found dismembered. Washington and Europe found the three-decade long Mobutu dictatorship that followed more to their liking, as the military dictator more than willingly continued the plunder of the Congo’s resources and brutal exploitation of the working class first instituted under colonialism.

For more than a half of a century, from the Mobutu dictatorship, through the Congo War in the 1990s, and up to the present conflicts, Washington has been, often violently, a guiding influence in the affairs of the Congo on behalf of American corporations.

The ongoing use of forced child labor in the Congo demonstrates the utter failure of capitalism to undertake any progressive venture for the advancement of humanity. More than a century after his death King Leopold’s ghost still haunts the Congo.

Sitting atop and guiding this structure of exploitation remains the iron hand of the imperialist powers, with Washington and its counterparts in Europe pursuing their national corporate interests at the expense of the Congolese masses.

The contradiction between the vast economic and mineral wealth that exists in the Congo, and the vast gulf between the tiny wealthy layer of Congolese elite who are the servants of Western capitalist interests on the one hand, and the majority of Congolese who make $2 or less per day on the other, illustrates most clearly this intolerable reality.