Shining a Light on Rohingya Refugees

“It is probably the worst kind of habitat a human can live in.”

3 Mar2017 – When she was 11, Hasina Begum was shot in the back. She had found herself in the crossfire between Rohingya protesters and the police force at the Kutupalong Refugee Camp in Bangladesh where she was housed.

Things didn’t get better. Three years later, in 2007, the Rohingya girl was gang raped by three Bangladeshi men and later sold to a man as a sex slave for the equivalent of about $10. She escaped, and became a prostitute.

Now 24, Begum is one of about 93,000 Muslim Rohingya living in Bangladesh who have fled attacks by government forces, radical Buddhist groups and militias in neighboring Myanmar. Its stories like hers that inspired Bangladeshi photographer Saiful Huq Omi to document the difficult lives of Rohingya refugees living in his country. 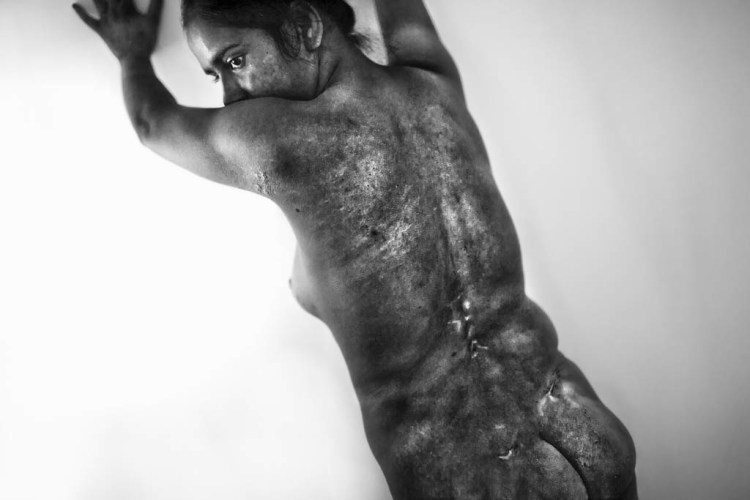 Hasina Begum, a Rohingya refugee in Bangladesh, has been shot, raped and sold as a sex slave before escaping and working as a prostitute. (Saiful Huq Omi)

“I felt that this Rohingya story needs a storyteller,” he says, in a phone interview with Global Journalist. “I then began to follow the refugees around the camps because I felt that it is the most untold and unknown story that people should know. It is just too heartbreaking. And I decided to be their storyteller.”

Bangladesh’s Rohingya population hail from Myanmar’s neighboring Rakhine state, where the Muslim minority group has long been treated as unwanted by the country’s mainly Buddhist government. A 1982 law in what was then called Burma stripped the Rohingya of citizenship, taking away rights to voting and public services.

Now the world’s largest group of stateless people, more than 60,000 Rohingya have fled Myanmar for Bangladesh since October after a campaign of arson, rape and killing by Myanmarese security forces that human rights groups say is tantamount to ethnic cleansing. Yet as Begum’s story shows, life as a refugee in Bangladesh is hardly secure. Omi shared his pictures and spoke with Global Journalist’s Dewey Sim about photographing a forgotten people. 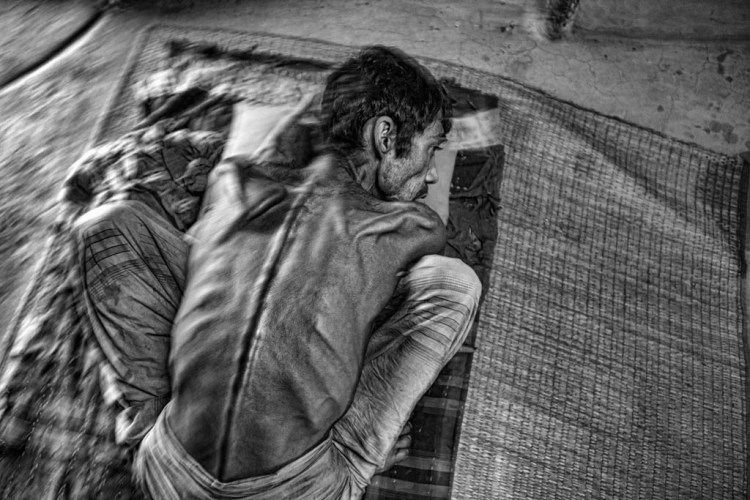 Ali Mia, a Rohingya refugee, could not get medical treatment for his unknown ailment.

GJ: Describe the living conditions at the refugee camps in Bangladesh.

Omi: It is horrible and nothing could be worse. In Bangladesh, especially, refugees are deprived of basic needs such as food, shelter, education and access to healthcare. It is probably the worst kind of habitat a human can live in.

A group of 10 refugees would often share a house which measured 10 feet by 10 feet. The houses are made of leaves and polyethlene. These refugees are also not allowed to work. This means that they are denied access to economic independence and are not able to afford food. It is not surprising that the rate of malnutrition is high.

In other places like Malaysia, refugees might be in a better situation, but they are still unhappy. They feel that they will never be part of society. When I interviewed a few refugees, they said that even though their lives are saved from the violence in Myanmar, some of their loved ones remain behind, and there will always be something in Myanmar that they deeply miss.

GJ: What is one photograph you took that gave you the most reflection?

Omi: I took one photograph that I think tells the story best — it is the one with a man pointing at the horizon and there are three broken boats below him. That’s a photograph that is particularly close to my heart. 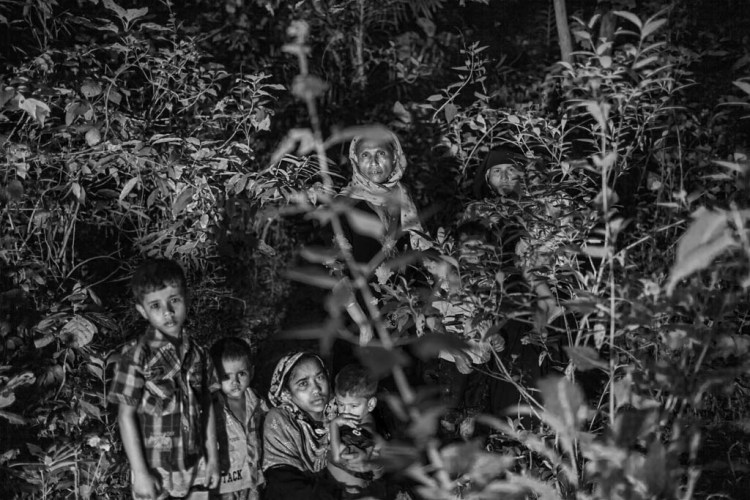 A Rohingya family fleeing to Bangladesh waits in a jungle in 2012.

He is Abu Kalam, a friend of mine who is also my guide in Bangladesh. On that day, , I was tired and exhausted after a full day of work. We decided to take a walk by the Naf River.

All of a sudden, he started pointing at the other side of the river. He asked me: “Omi, can you see that?”

He was pointing towards Myanmar. I replied: “Yes, of course I see it. It’s just two miles away from here.”

Then he said something that I would always remember. He said: “For you, it may be just two miles. For me, that’s where my mother lives. It’s 2 million miles that I will never be able to cross to visit my mother.”

GJ: Your photographs of Rohingyas are mostly monochrome. Why?

Omi:  When I started listening to stories of the Rohingyas, I felt that these stories can be better told through black and white work. Instead of using color as a medium, I wanted to use the absence of color instead to take the audience directly to the story. Sometimes, colors can be quite distracting. Especially when a story like this is so captivating.

GJ: What do you think about the international news coverage of the Rohingya?

Omi: Until 2012, there was hardly any coverage of the Rohingya issue. Recently, there have been greater coverage by mainstream media outlets. But it’s also sad to know how long it took for the world to be exposed to the growing problem of genocide in Myanmar. Now, at least, more attention is paid.

However, I feel what is deeply missing from the narrative is that people have not investigated enough to understand the problem.

These published stories are more about the suffering of the people and it are not in-depth. They do not speak about the root cause of the problem and have failed enormously to make [Myanmar state counselor and Nobel laureate] Aung San Suu Kyi liable for a large part of the problem. Because of the policing and governmental control of the media, media outlets are nervous about saying the truth.

GJ: What role do you think photojournalists can play to help the Rohingya?

Omi: This is a shared problem that needs us to work together to be resolved, and one tiny part lies with the photographer. Photography is an extremely powerful medium because it creates evidence. It points you to the evidence that you cannot ignore. If it is in words, people might not be convinced when they read it. Photography allows us to create enough evidence.