The ‘Birth Pangs’ of a New Middle East, Remixed

You all remember former US Secretary of State Condi Rice’s notorious 2006 prediction about “birth pangs of a New Middle East.” True to the George “Dubya” Bush/Cheney regime, Condi got it all spectacularly wrong, not only about Lebanon and Israel but also Iraq, Syria and the House of Saud. 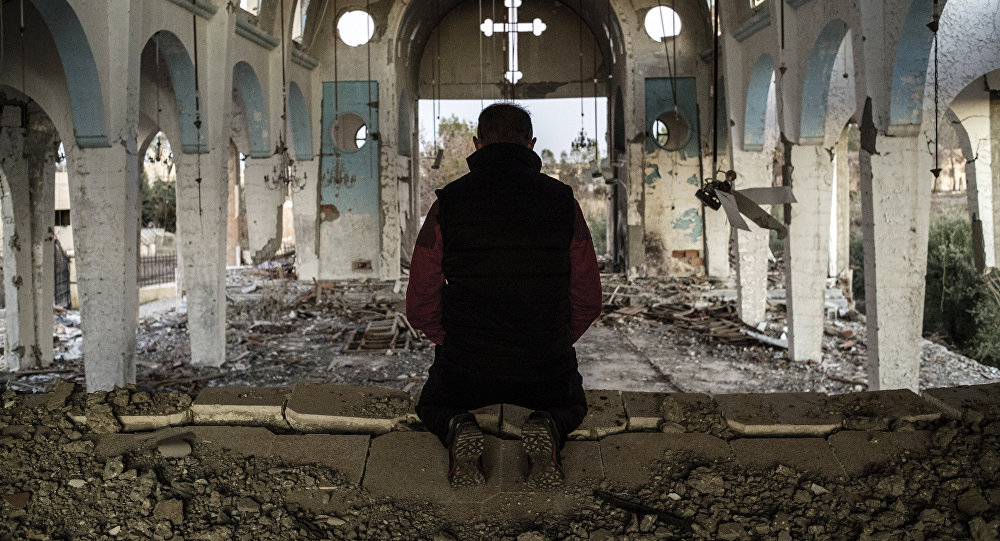 17 Mar 2017 – The Obama administration duly maintained a tradition that we could, light-heartedly, call The Sex Pistols School of Foreign Policy (“no future for you”). That’s perfectly exemplified by unflappable Russian Foreign Ministry spokeswoman Maria Zakharova in just a few sentences.

Zakharova points out how Team Obama “didn’t have a consistent Syrian strategy in entire eight years: one day we bomb it, the next day we don’t, one day we pull out of Syria, the next day we go in.” That’s because “one branch of government did not understand what the other branch was doing.” And in the end “they just went ahead and dropped all Syrian politics without seeing it to its logical end. Then they focused on Aleppo, but not on resolving this situation, but solely on building up hysteria and an information campaign geared exclusively to the elections.”

And that leads us to the adults in the room in the Trump era, the ones that are actually monitoring the birth pangs of the real new Middle East: Russia.

That Iranian base in Latakia

Bibi is desperate because Iran, with facts on the ground (Iranian and Hezbollah fighters) in partnership with Russian facts in the air, is actually winning the Syria proxy war for Damascus. And whatever happens next, post-Astana negotiations, Tehran will keep a permanent foothold in Syria – much to the ballistic outrage of the NATO-GCC-Israel combo.

A parallel implication is that Israel can’t attack southern Lebanon anymore. Last month, in Tehran, I had the confirmation that Hezbollah has now up to 40,000 fighters stationed and/or monitoring a maze of underground installations ready to defend Lebanon from everything; that’s up to ten times more than in 2006, an invasion that resulted in a humiliating Israeli retreat.

Ther’s nothing that Bibi could have offered Putin – apart from a hazy, unsubstantiated promise to order the powerful Israeli lobby in D.C. to soften hysterical, 24/7 Russia demonization.

Meanwhile, reports emerged that Syrian President Bashar al-Assad gave the green light for an Iranian naval base in Latakia, close to the Hmeymim airbase used by Russi’s Aerospace Forces. That came after Mohammad Bagheri, Chief of Iran’s General Staff, stressed that the Iranian Navy would soon need bases in Syria and Yemen.

In Tehran, I had the pleasure of meeting Major General Mohammad Ali Jafari, the top IRGC commander and a supreme tactician/organizer specialized in asymmetrical warfare, his vast experience acquired during the Iran-Iraq war and Hezbollah success in Lebanon in 2006.

That’s like meeting Marine Corps. Gen Joseph Dunford, the head of the US Joint Chiefs of Staff – but without the pomp and circumstance. A courteous, graceful man, Jafari did not have time to get into details, but other sources confirmed that without his battle-hardened knowledge Damascus by now would have been in big trouble.

What Russia wants in Syria

Then there’s an interview by Russian Deputy Minister of Foreign Affairs Mikhail Bogdanov, former ambassador in Tel Aviv and Cairo, and now also Putin’s special representative in the Middle East, that has, metaphorically, parted the Red Sea all over again.

Bogdanov offered to Arab audiences a concise guide to Russia’s Middle East policy – the absolute opposite of loony US neocon regime change dementia.

He compared the “tens of thousands” of foreign Salafi-jihadi mercenaries at war with Damascus to the Russia-Iran military presence officially request by “the legitimate government.” He dismissed the warped notion of Iran exporting the Islamic revolution (that applied to the early 1980s). He stressed how Moscow wants some sort of US-Iran entente cordiale – with (unlikely) the House of Saud on board. Negotiations could be held in Moscow or elsewhere.

The Kremlin, as Bogdanov expressed it, wants a secular Syria, beyond sectarianism, springing up out of free and fair elections supervised by the UN. Predictably, his words barely masked Moscow’s exasperation with Washington’s obsession in keeping Tehran out of Syrian peace negotiations. And he firmly dismissed the “moderate rebels,” whose only goal is “Assad must go” to stand trial in The Hague (“With this goal, the war can go on forever”).

Team Trump members might entertain the wishful thinking notion that Moscow will ditch Tehran – not only in Syria but in terms of Eurasia integration. Not a chance. Yet tell that to the House of Saud.

The House of Saud spent fortunes investing in Salafi-jihadi provoked regime change in Syria and an unwinnable war on Yemen conducted with US weapons that has generated a massive famine. Moscow might be able, with time, to instill some geopolitical sense into Riyadh. Once again, not a chance. Because the House of Saud is now convinced their best ally is President Trump.

Geopolitically cornered, unable to shackle itself off its trademark paranoia, the House of Saud decided to go on the offensive, with King Salman investing in a lavish Asian tour, Beijing included, where he signed a rash of deals, and Crown Prince Mohammad bin Salman – actually The Warrior Prince, responsible for the civilian tragedy in Yemen – courting Trump in Washington.

The resulting spin now rules that Saudi Arabia will be an influential “close consultant” to Trump on Middle East security and economy, including the Palestinian tragedy and the Iran nuclear deal. No Dante circle of hell could have provided a more perfect “birth pangs” recipe for unmitigated disaster in a new Middle East.

All eyes on the Syrian Kurds

Predictably, neither Moscow nor Tehran was invited for the anti-Daesh meeting of 68 nations hosted by Washington next week. Yet another chapter of hardcore information war; for US public opinion, Russia and Iran simply cannot be allowed to be perceived as actually fighting – and winning — a real war on terror.

Smash Daesh is a major Trump campaign promise. He won’t do it with several hundred US Marines with their sights on Raqqa – by the way, technically a minor invasion, because Damascus did not request their presence. So it’s back to Plan A, a.k.a. the Syrian Kurds.

First the top US commander in the Middle East, General Joseph Votel, went to Kobane to pledge Pentagon support for the Kurdish-led Syrian Democratic Forces (SDF). Then the Pentagon released its (revised) Trump-ordered strategy to defeat Daesh, which boils down to No Sleep Till Raqqa.

That implies a brand new geopolitical alignment. Team Obama – especially the CIA and the State Department — was hostage to Turkey’s view of the Syrian Kurds as “terrorists.” Not Trump. And not Bogdanov, by the way: “Why Turkey agreed on Iraqi Kurdistan, but does not agree to the Kurdistan in Syria? I think that this is not their business. This is an Iraqi affair and Syrian affair. Syrian people and not the Russian or Turkish state should decide.”

The Pentagon is, to put it mildly, fed up with Ankara. For many reasons: from the non-stop purges (which get rid of strategically placed American assets) to the Turkey-Russia rapprochement, inbuilt in Erdogan’s threat to pivot East for good in case Washington supports the Syrian Kurds and/or does not extradite Fethullah Gulen, accused by Erdogan of being the mastermind of the failed 2016 military coup against him.

So how about the taste of the new blueberry cheesecake in town; Washington, Moscow and Tehran all allied behind the Syrian Kurds.

It’s complicated, of course. In the Astana negotiations, Turkey, Russia and Iran are theoretically on the same side. Yet Tehran backs some sort of Kurdish autonomy in Syria – an anathema for Erdogan, for whom the only acceptable Kurdish autonomy is for his Barzani-controlled friends in Iraqi Kurdistan.

So it’s up to Moscow to strike a balancing act – trying to explain to Ankara that there’s no other way apart from Syrian Kurd self-administration in a future Syrian federal state. The concept is extremely ambitious; Moscow aims to show East and West how the Syrian Kurds, as a real non-Islamist, secular Syrian actor, are the perfect instrument to fight Daesh and other forms of Salafi-jihadism.

No wonder Saudi Arabia is not impressed; fighting Daesh was never their priority. But what really matters is that Ankara is not convinced.

Erdogan has his total focus on the upcoming referendum that may turn him into a sort of Presidential Sultan. To win decisively he must court Turkish nationalism by all means necessary. At the same time, geopolitically, he cannot go against Russia/Iran and Washington in one go.

Only a few weeks ago no one would have imagined the Syrian Kurds harboring potential strategic leverage capable of turning Middle East geopolitics – linked to Asia, Africa and Europe — upside down. China’s One Belt, One Road (OBOR) – that building frenzy of ports, pipelines, high-speed rail — firmly targets the Southwest Asia passage, from Iran (a key hub) to Saudi Arabia (China’s top oil supplier). Syria is also a future OBOR hub – and for that Syria must be peaceful and free of Salafi-jihadis. In silent, discreet Eurasia integration fashion, China supports what Russia and Iran are deciding.

By now it’s much clearer who’s configuring the birth pagans of a new Middle East. It’s not Israel. It’s not the House of Saud. And it’s not exactly Trump.

Reflections on Six Years of Conflict in Syria

Are Saudi Jihadis Entitled to a “Safe Zone”?