The Politics of Water Insecurity

To achieve universal water security, we need to let politics and culture drive water planning as much as economy does. 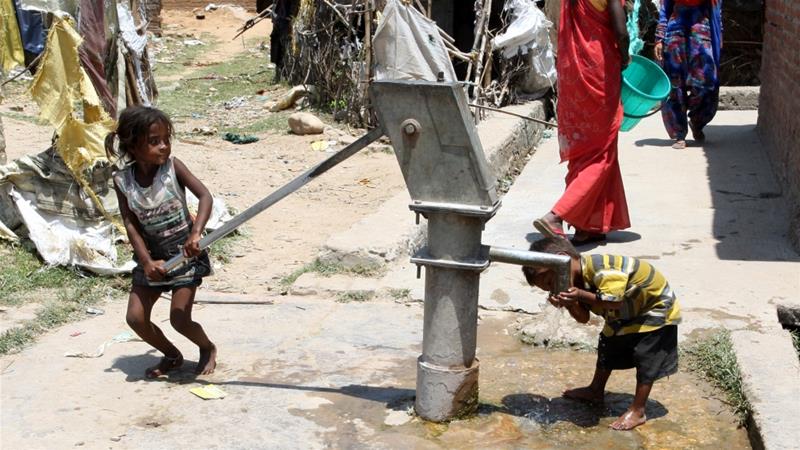 An Indian girl operates a water hand pump for her younger brother to drink on a hot afternoon on the outskirts of Jammu, Kashmir, in June 2014. [Jaipal Singh/EPA]

This 22 March 2017, World Water Day, we focus attention on global issues of water access. The statistics are not comforting. The poorest ninth of us – about 800 million people – do not have reliable access to clean drinking water.

This is the starkest form of “water insecurity” – the inadequate access of individuals and groups to fresh water.

The explosive growth rates and technological advancements of the past several decades notwithstanding, we have been unable to provide a global minority – numbering more than the entire population of Europe – the most basic of physiological requirements.

Policy experts often respond to water insecurity by focusing on the issue of physical scarcity, and calling for more water data – particularly measurements and forecasts on water availability – to improve water management. It is true that water managers probably could be more efficient if they had sounder estimates.

The concept of water insecurity could, however, catalyse much more than a technocratic and managerial response.

We should take the concept as invitation to root water access issues in particular historical, geographical, infrastructural, and political contexts. Water insecurity is an effect, rather than a cause, of sociopolitical domination and infrastructural exclusion.

Take the example of gender. Analysts of water insecurity who are too fixated on physical scarcity tend to neglect the many contributions women make to household production, without which the larger workplace-centred economy could not exist.

The World Health Organisation estimates that women shoulder about 65 percent of the burden of fetching water, the most fundamental economic activity for households without water access (PDF).

This time and labour could have been devoted to other security-enhancing activities, such as education, farming, or earning a wage.

A lack of water data did not cause this unfair distribution of water-provisioning work. Engrained structures of gender subordination distributed unpaid and time-and-labour-intensive jobs on to the backs of women.

A spatial approach to water insecurity reveals that water-insecure communities often reside in socioecological peripheries – regions without sufficient access to water because of a lack of political power and infrastructural connection.

Take, for example, the rivalry between Pakistan and India over the Indus river in northwest South Asia.

Pakistan and India signed the famous Indus Waters Treaty (IWT) in 1960 with the mediation of the World Bank (PDF) . Experts regard the treaty as a model of good transboundary governance.

However, central state elites arranged the IWT and they did not necessarily account for the needs of the many river-dependent communities residing within those states.

Ethno-regional minorities in both countries have protested for decades that IWT failed to account for their needs.

The people of the disputed Kashmir have the strongest case for political exclusion. Most, if not all, of the Indian and Pakistani engineering and policy elites involved in the negotiations agreed it would be too problematic and messy to give Kashmiris a political voice.

The Green Revolution of the 1960s, which relied on “thirsty” seeds, fueled increases in landlessness in both countries and transferred power and wealth into the hands of landed elites.

These technological and political changes probably have much more to do with rural water insecurity than any physical scarcity of water.

Listening to the masses

This March 20-21, when the Indus Waters Permanent Commission meets in Lahore, the commissioners should remember that water insecurity is less about national per capita water availability and more about the concrete communities in the basin whose water insecurity reflects broader social-spatial exclusions.

None of this means water data is not important to decreasing water insecurity. It does, however, mean that a sustainable solution must account for larger structures of domination and exclusion.

For Pakistan and India, it means relying less on engineering expertise and more on popular consultation when adjudicating water issues.

Historically, political establishments in both countries have mistrusted the impoverished masses, and have invested authority for water infrastructure planning in technocrats and experts.

Governing elites and members of civil society must wean themselves off this centuries-old habit, and listen more carefully to environmental and livelihood movements – often composed of the most marginalised populations.

There are organised groups of fisherfolk in the Indus delta, poor irrigating peasants in the Punjabi heartland, and Kashmiris living in the highlands where dozens of new dams are planned, who should be at the centre of any process of negotiating the Indus.

In other words, we need to find ways to let politics and culture drive water planning as much as economy and engineering does.

On the global scale, more capital needs to be available for the construction of new water infrastructures in the Global South.

This does not necessarily mean a rush to build large new dams, but rather a context-specific analysis of what new infrastructures would benefit the most deprived peoples of the world, those who live predominantly in Sub-Saharan Africa and South Asia, but also in pockets of racialised poverty in countries such as the United States.

In some locations, new infrastructures may indeed mean new dams, while in others it may mean upgrading sewage pipes or a treatment centre.

The point is that material infrastructure is necessary. We should meet the specific requirements of women, people residing in socioecological peripheries and other non-elite water users not as obstacles, but as imaginative challenges to our ideas about infrastructure and equality.

These recommendations may seem utopian and impractical. I accept the charge of utopianism, which is inherent to building a type of society not yet seen.

I reject the accusation of impracticality. If the goal is to decrease deprivation and to equalise global life chances, nothing is more practical than the democratisation of water planning, which means understanding water insecurity as an effect of deeper forms of social insecurity.