The Walled Off Hotel: The Struggle for Decolonization

Banksy’s new installation hotel in Bethlehem is a powerful anticolonial statement about the Zionist colonial project. 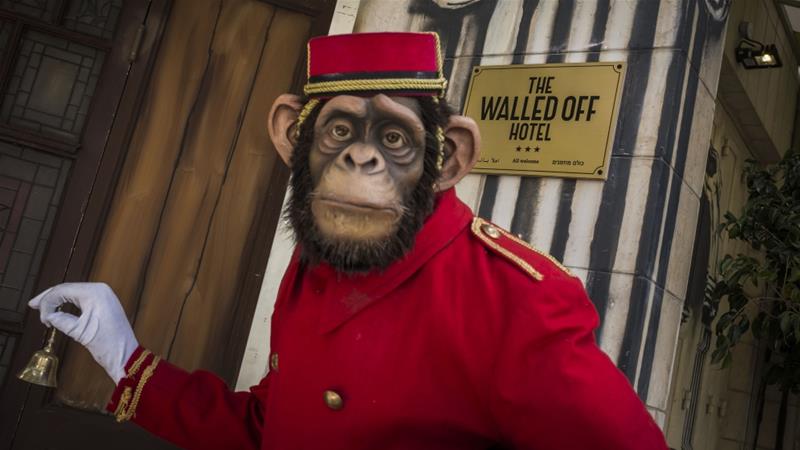 13 Mar 2017 – The British street artist known as Banksy is no stranger to controversy and the recent debate over his new installation in the town of Bethlehem, the Walled Off Hotel, does not come as a surprise.

Some critics have accused Banksy of Pale-ploitation – of making profit off Palestinian suffering, normalising the occupation, beautifying the wall, and even worse, some have claimed that the hotel installation is an international conspiracy meant to represent the Israeli colonisers and the colonised Palestinians as equal sides in the struggle.

Quite the opposite. The new installation hotel is a powerful anticolonial statement about British imperialism, the Zionist colonial project, Israeli occupation and apartheid politics in Palestine.

Banksy exposes, subverts, and lampoons the naive Western liberal fantasy frame, by which Western travellers disconnect the struggle and travel itself from its colonial history, ignore the gross Israeli violations of Palestinian human rights, and present the Israelis and Palestinians in the language of moral equivalency and parity.

Anticolonialism and apologies for imperialism

One of the major attractions of this hotel’s lobby is its spectacular fetishised simulation of one of the legacies of colonial history, namely the gentlemen’s club.

The gentlemen’s club serves as the frame narrative, so to speak, for the hidden narrative of the colonial story-within-a-story of the Balfour Declaration, an egregious historical document whose effects still shape the Zionist ethnic cleansing project in Palestine.

Banksy correctly suggests that the Balfour Declaration is the truth of the colonial spectacle of the gentlemen’s club and the Zionist settler-colonial project.

The Walled Off Hotel is thus a part of the British national debate not only about colonialism, but also about the Balfour Declaration.

The gentlemen’s club replica in its colonial glory offers an anti or counternarrative to the exotic nostalgia boom for the British Raj that has swept British public discourses and the media in the past few years.

Banksy himself issued a statement in which he situated his installation in this national psychodrama. He stated: “It’s exactly one hundred years since Britain took control of Palestine and started re-arranging the furniture – with chaotic results. I don’t know why but it felt like a good time to reflect on what happens when the United Kingdom makes a huge political decision without fully comprehending the consequences.”

OPINION: The rise and rise of the border wall

This national reflection is even more urgent in light of the revisionist historical campaign that British politicians have been leading to exonerate Balfour and the British government of its responsibility for the destruction of Palestinian society.

Prime Minister Theresa May and Foreign Secretary Boris Johnson have gone as far as exhorting Britons to “feel pride” in the Balfour Declaration, which “reflected a great tide of history”.

Re-presenting the occupation and resistance

The art work in both the lobby and rooms of this installation hotel also bear witness to the ugly realities of the occupation and the apartheid wall outside.

They carefully document the ongoing Palestinian Nakba under the Zionist settler-colonial project and apartheid regime.

The western wall of the lobby is adorned with hunting CCTV cameras mounts and a collection of slingshots as well as two criss-crossed sledgehammers, just above the royalty plate collection.

Banksy successfully juxtaposes the technologically sophisticated surveillance system of the Israeli occupation and apartheid regime as well as the brute force of the sledgehammers with the primitive “weaponry” that has functioned as an iconic symbol of Palestinian resistance.

The threat of the surveillance cameras is heightened by the few drones that are hanging to the left of the trophy wall.

The most moving and highly emotional area of the installation-hotel is the Gaza Memorial, which was completely ignored in the media.

The magnitude of the destruction and death of Israel’s wars on Gaza is captured in three different exhibits: An elaborate recreation of the roof-knocking tactic of the Israeli military; a glass case showing children’s dusty shoes and a school backpack, probably scavenged from the rubles in Gaza; and the scale of justice, in which the artist placed heaps of fake teeth to represent the victims of Israel’s “protective edge” war on Gaza.

In countless objects and displays, Banksy undermines the ways in which Western liberal media and public discourses frame the Palestinian struggle for freedom in the language of moral equivalency, misrepresenting it as a symmetrical struggle between two equal and equally legitimate narratives.

The bust of a Hellenised Palestinian youth, a clear take on Michelangelo’s classic statue David, re-appropriates and inverts the classic Western underdog master-narrative.

The homosocial and intimate subtext of the pillow fight between an Israeli soldier and a Palestinian youth betrays the dialectic of involuntary participation and forced identification in such power games between persecutors and their victims.

The homologous image of this pillow fight cannot be anything but the “death (soccer) match” in Auschwitz.

The artist’s alleged invitation to Israelis to visit Bethlehem is full of sarcasm and a parody of Westerners who think that multicultural tolerance and acceptance of the other can offer the antidote to the so-called “conflict”.

It also brings home to Israeli citizens the illegality of the occupation, an issue that has been long forgotten in Israeli media and public discourse.

On its low daily rate and limited available space, however, this installation hotel cannot be self-sustainable. It is nothing more than a parody of the many occu-touristic commercial ventures that have developed around the occupation and apartheid wall.

Indeed, Banksy draws attention to the problem of commodifying Palestinian suffering and oppression within the contradictions of Palestinian captive economy under occupation. For Banksy, no political solution is viable without sustainable economic independence.

In its playful pun on the luxurious Waldorf-Astoria Hotel, Banksy also situates occu-tourism and the Israeli apartheid regime itself within the contradictions of global capitalist economy.

The polarisation of wealth in the region could have been invoked in the idea of the gentlemen’s club itself, a sarcastic comment on one of Tel Aviv’s boutique hotels, whose decor is supposed to be a throwback to a 1950s gentlemen’s club.

Grounded in his understanding of the universality of the struggle for freedom, Banksy reinvents the Palestinian struggle in a universalist idiom of revolutionary politics and solidarity.

The gallery does not simply reflect a “marriage” between Palestinian art and global art in a way that elevates “both Palestinian and universal art”.

READ MORE: Jim Crow is alive and well in Israel

Through his putatively apolitical artistic symbols, Banksy offers Palestinians a common struggle with other disposable communities around the globe, including refugees (the three refugee-less paintings), the unemployed and unemployable (the three rat clocks), and impoverished British communities (the girl with the balloon located just outside the site). This universality is the only way towards, as the logo embroidered on one of the bouncer’s’ black windbreakers says, “decolonisation”.

Jamil Khader is professor of English and dean of research at Bethlehem University, Palestine.