U.N. Warned That Myanmar May Be Trying to Expel the Rohingya Population Entirely 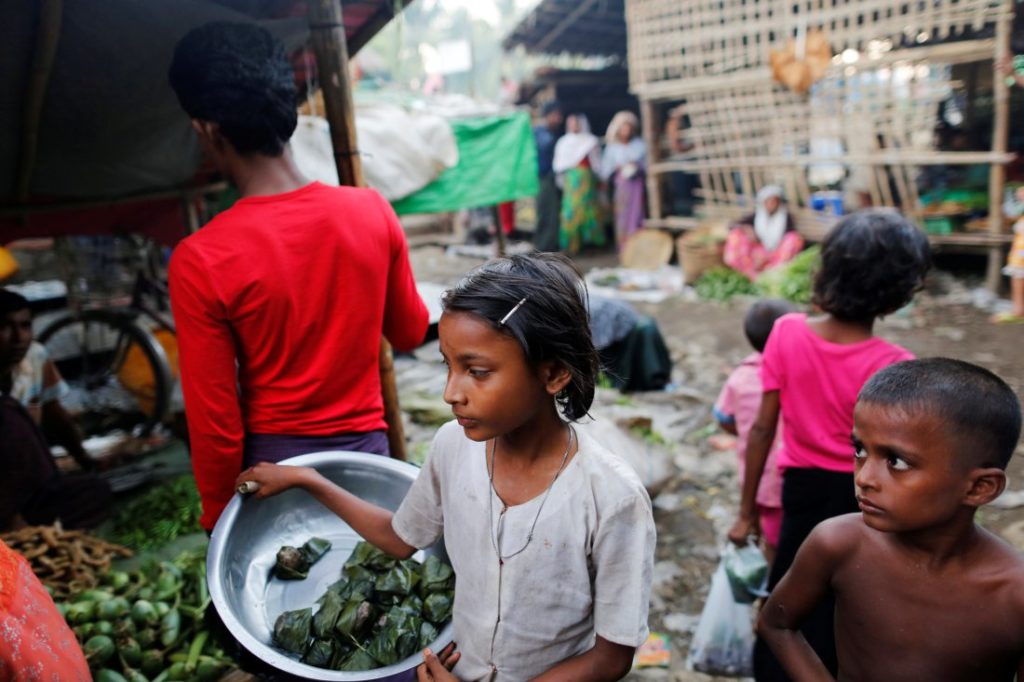 A girl sells food at the internally displaced persons camp for Rohingya people outside Sittwe in the state of Rakhine, Myanmar, November 15, 2016. REUTERS/Soe Zeya Tun – RTX2TV92

14 Mar 2017 – The U.N. Human Rights Council was urged Monday [13 Mar] to establish a commission of inquiry into the persecution of Myanmar’s Rohingya minority, a mostly stateless Muslim group living in apartheid-like conditions in the country’s western state of Rakhine.

Addressing the council in Geneva, the U.N. Special Rapporteur on Human Rights in Myanmar, Yanghee Lee, warned that the government “may be trying to expel the Rohingya population from the country altogether.” Lee called for a full U.N. inquiry into the “systematic, structural, and institutional discrimination” and “long-standing persecution” against the Rohingya and other minorities in the state, which has seen several waves of deadly violence over the past five years.

The council is expected to rule on a wide-ranging resolution on human rights in Myanmar on Thursday. A preliminary draft does not include a full commission of inquiry, but urges the government to cooperate with the rapporteur’s efforts to investigate. Riots in 2012 displaced more than 100,000 Rohingya, who still live in squalid camps near the state capital Sittwe, while military operations late last year displaced an estimated 94,000 others, most of whom fled to neighboring Bangladesh.

There are an estimated 1.1 million Rohingya in Myanmar. The latest exodus began after the Myanmar armed forces launched counterinsurgency operations in the state’s northern Maungdaw township in response to a deadly attack on border patrols by suspected Rohingya insurgents on Oct. 9. State security forces have been accused of “collective punishment” in the wake of the attack; refugees poured into Bangladesh telling accounts of gang rape, torture and extrajudicial killings.

Lee visited Maungdaw in January, but emerged with concern that people she spoke with would be subject to reprisal by security forces. The rapporteur also recalled harrowing accounts she heard from refugees who had fled across the border; in one case a woman thought that her son had been taken out of the family’s burning house. “She heard him screaming for her and managed to save his life but scars have been seared into him — scars which I saw with my own eyes,” Lee recalled for the council. “The truth about whether all, or some, or any of these allegations are correct needs to be established.”

Read More: ‘This Will Be the Worst War’: Fears of Mass Displacement as Thousands Flee Conflict in Myanmar’s Northeast

In December, Lee told TIME that the situation in Rakhine state is “getting very close to what we would all agree are crimes against humanity,” and the reports she had received painted a different picture to the government’s official version of events.

The Myanmar government, led by Nobel Peace Prize laureate Aung San Suu Kyi, has denied allegations of wrongdoing. A government-backed commission was established to probe the allegations, but the rapporteur and other experts said it is neither credible nor impartial. Lee enumerated a number of other serious human-rights concerns in the country at large, also calling for “prompt, thorough, independent and impartial investigations” into escalating conflict in the country’s northeastern Shan and Kachin states, where tens of thousands of people have been recently displaced.