This is the first time that one of the members of the right-wing coalition currently in power has confirmed Rousseff’s version. 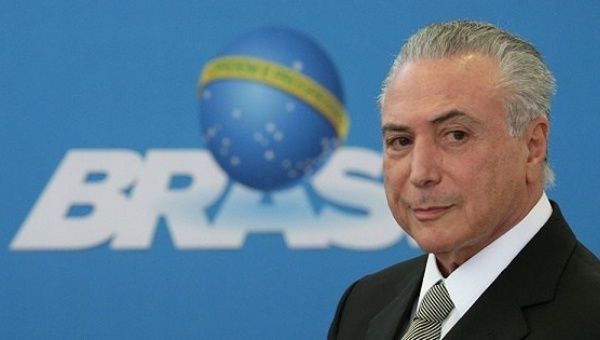 Brazil’s Senate-imposed President Michel Temer admitted Sunday [16 Apr 2017] in a TV interview that the former head of the lower chamber, Eduardo Cunha, opened the impeachment process against former President Dilma Rousseff because her party did not protect him from an investigation over corruption charges.

Cunha’s decision followed the Workers’ Party’s vote at the ethics committee supporting an investigation into corruption charges against him over four bank accounts hidden in Switzerland. Cunha is currently serving a 15-year sentence on corruption charges involving the state oil company Petrobras.

“At one point, Cunha told me that he was going to shelve the requests for Rousseff’s dismissal because he was promised three votes in his favor at the ethics committee,” Temer said to Band TV.

“Then, I saw on the news that the three members of the Workers’ Party voted against him. Later Cunha called me and said ‘Forget what I said. I am going to call the media and start the (impeachment) process,’” he added.

“If the vote (at the ethical commission) had turned out differently, Mrs. President would likely still be governing,” said Temer.

Rousseff will now include Temer’s declarations in a request to the Supreme Court asking for the annulment of her impeachment and a dismissal order against Temer, her lawyer Jose Eduardo Cardozo reported.

“The Supreme Court now has evidence that Cunha did not accept the impeachment process because of the alleged fiscal irregularities but for revenge because she did not let him blackmail her,” said Cardozo.

Temer detailed the conspiracy against Rousseff just days after Cunha, from his prison cell, threatened to disclose Temer’s role in the plot, according to Pagina 12.

This is the first time that one of the members of the right-wing coalition currently in power has confirmed Rousseff’s version: her impeachment was the result of Cunha’s revenge over the approval of an investigation against him.